Circuit draws no power from battery supply, but draws 60 mA from programming header

I am working on a project where I have three different power inputs. The first two are programming headers (for a msp430 and atmega328) and the third is a battery input. All three will power the entire system when plugged in, but the battery is disabled when either of the headers are plugged in.

My circuit is showing some strange behavior. Firstly, I am able to program the MSP430 through its programming header and blink a test LED. This draws about 60 mA due to the power MUX, diode, and voltage regulator. Everything is fine at this point. My confusion comes when I plug in the battery without either of the programming headers. Nothing happens, no LED blinks. I've tested all the points along the battery path and there is about 3 volts on the output of the voltage regulator..but the power supply (simulating a battery) shows no current draw, or at least less then 1 mA so I can't see it. So it would seem the MSP is not receiving sufficient current to turn on. However, I soldered a test lead to the output of the regulator and was able to light an external LED. So I know the regulator is working correctly. All grounds are common throughout the board.

In my testing, I found that with the battery input there is a voltage drop of about .7 V from the input of the regulator to its output. With the MSP header there is less then .1 V drop across it.

So my question is, why is there such a large voltage drop across the regulator when the battery is plugged in but not when the MSP header? Where is this mysterious impedance coming from? This is my second version of this board and I did not run into this problem on the first.

To clarify, the IC on the left is the power mux for the two programming headers. Its output leads to the input of the regulator (buck converter) which shares a node with the battery, as shown.

I'd appreciate any ideas or comments. Thanks! 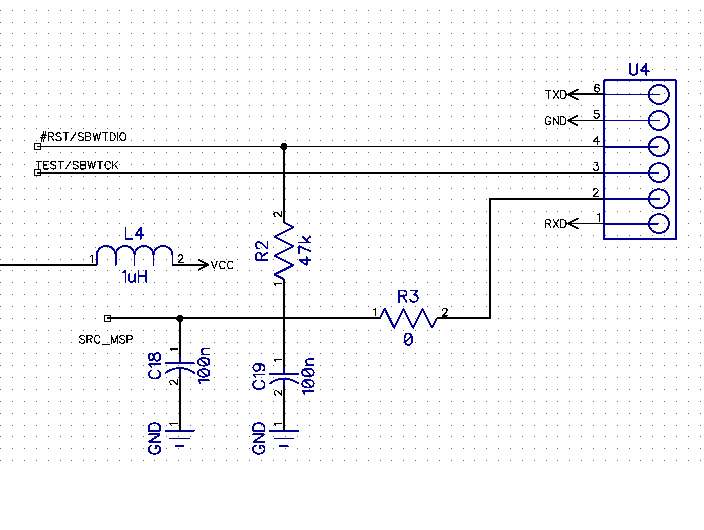 So RST doesn't have a connection from the battery. I am confused though because in my first revision of this design, I used the exact same diagram for RST and it definitely works with the battery.

It turns out the issue is because RST was not pulled high. The first board didn't have this issue because I tied SRC_MSP directly to VCC.

Not the answer you're looking for? Browse other questions tagged msp430 or ask your own question.