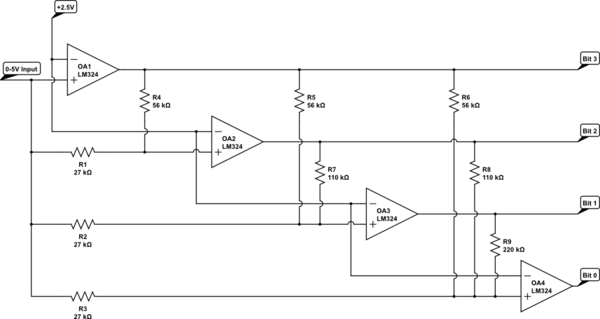 I was trying to recreate the following ADC (using comparators or NAND/NOR logic elements) circuit to control a 74HC4514 with a 0-5V voltage, but for some reason it doesn't behave as it should.

Looks like the outputs of the ADC aren't either ON or OFF, but transition between those states and messing up the stages on the 74HC4514. I tried to do the ADC circuit with a 74HCT00, 74HCT02 and 74HCT04, but all with the same result. When using Op-amps as comparators, all outputs are either ON or OFF.

There must be something I'm missing in this simple circuit, any ideas?

You cannot make an ADC with logic gates. Your approach to use op-amps was the correct one. If it didn't work surely there must be some mistake there. Try to test your comparators one by one, to see that they work OK, each one for its intended range.

You could even start with a '1 bit converter' where a comparator divides the analog input range to > Vcc/2 and <=Vcc/2. Then move on to the 2 bit ADC.

I think you attempted to make a comparator circuit, the image below shows the differences. What you have essentially puts the opamps in positive feedback and will cause them to swing to one rail or the other. You might be able to accomplish what you intended with comparator circuits, if you make a comparator, you can have no feedback from either terminal to the input. If you intended to do something else, like attenuate the output, then make sure the op amp is in negative feedback. 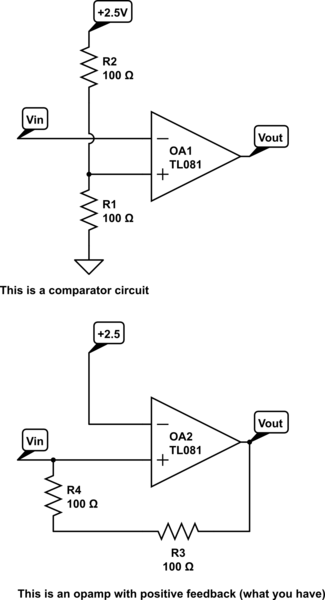 Not the answer you're looking for? Browse other questions tagged adc comparator or ask your own question.