How might this RF double pole switch be constructed and perform?

So I'm aware that there are some high speed RF SPDT switches e.g. Single-Pole Double-Throw (SPDT) switch offering 20nS switching time. I'm interested in a switch like the following picture. This is related to a wireless scheme called Generalized Spatial Modulation.

Basically, I'm wondering how such a switch is constructed (can we make it from SPDT switches)?

Note here that the poles can connect to any of the antennas (however the case where two poles connect to the same antenna would not be used in practice.)

It's a crude drawing, however it gets the point across. You can make the 2x4 blocking switch matrix with 10 SPDTs. The total max switching time (assuming you were OK with switching them all at once) would be the switching time of your slowest switch.

Realistically, with setting times and differences in propagation of your control signal, you'd probably need to add a few nanoseconds on. But, you're still in the same order of magnitude. 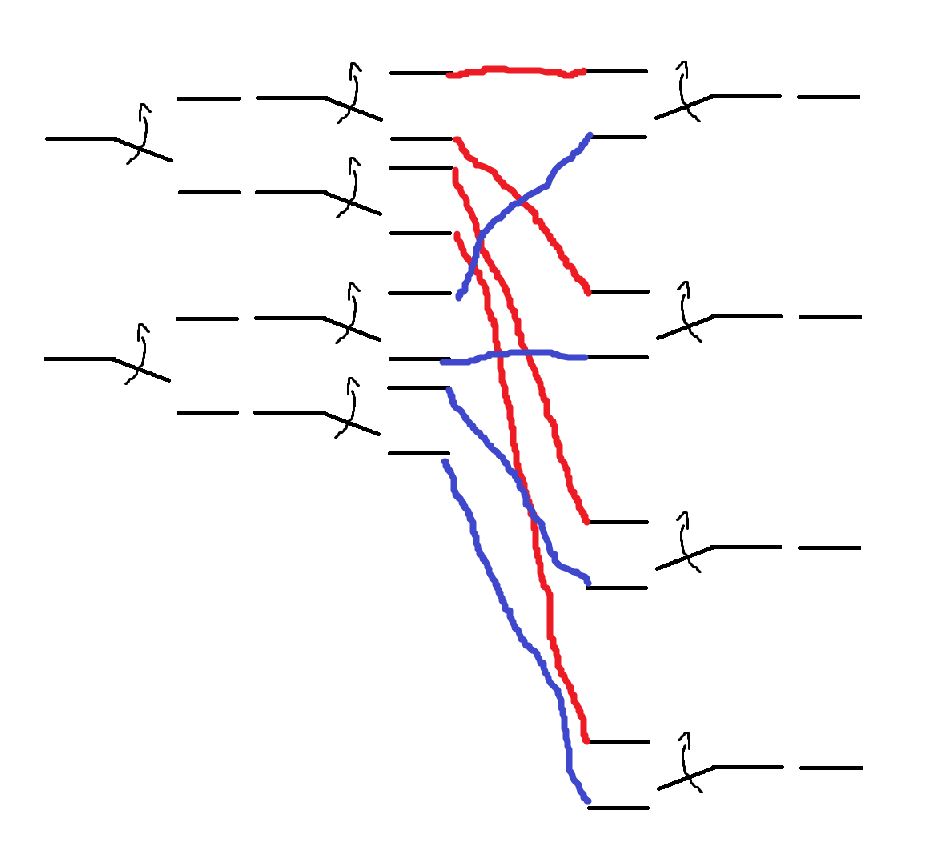 A switch where there are ≥2 “inputs” and ≥2 “outputs” and there can be simultaneous connections from any input to any output is called a crossbar switch. A quick search for “RF crossbar switch” suggest that they do exist as products, but are sold at the “if you have to ask, you can't afford it” level, which I assume you're not looking for based on your ham-radio tag.

If you were to build your own, the simplest approach would be to just construct the obvious electrical paths (two SP4T switches and four T-junctions), out of manual switches, relays, or electronic switching (e.g. PIN diodes).

The key part of such construction is to keep the length of all components with the improper impedance (in particular the inactive stubs of the T-junctions) much smaller than the shortest wavelength of interest, to avoid undesired reflections.

If you were to use four SPDT switches instead of passive T-junctions, and the switches themselves had the proper impedance, then you would avoid having any unwanted stubs and get better performance (limited by the specs of the switches). This increases the cost due to needing more switches, and also requires control logic to set the extra switches consistently.

Another feature you might want is to either short or terminate the two-of-four unconnected ports. This might require additional switching (I'm not sure exactly how much but it should be a simple “logic puzzle” to work out) unless you can get it as a feature in your SP4T switches, which you might if they're designed for RF switching.

Finally, I'd like to note (in case you're not already aware) that if you want to experiment with the possible topologies of switch networks without putting together a custom PCB design, that there are such things as coaxial relays, which typically come with SMA ports and terminals for the DC control signals, so all you need to add is some jumpers, a power source, and regular switches for control.

Of course, they're going to be more expensive than board-mount switches, but I've seen a lot of them available as surplus/used.

Not the answer you're looking for? Browse other questions tagged rf switches wireless switching ham-radio or ask your own question.

1
5-pole, double-throw relay
1
How can I switch multiple circuits using switches with limited pole counts?
1
Can this double-pole double-throw switch be simplified for controlling a motor (skylight)
0
How can I design a double pole eight throw microwave (2-6 GHz) switch?
0
Double switch potentiometer
0
Is the 'return' path / switch needed?