I have a doubt about proper values of MOV and SAR when they are connected in series as suggested in Epcos app notes (see below Fig. 12). For the 230 VAC mains they recommends SAR of 470 or 600 V, but MOV specification is missing. In my current design I'm using 275 VAC MOVs that doesn't makes any problem but possibly also cannot protect the circuit in a proper way. It seems that MOVs voltage has to be cut in half (e.g. 140 VAC) to start protecting when input voltage goes 20% beyond nominal value. There is many guides how to select proper single MOV but without mentioning such connection in series. Any suggestion? I'm also wondering why SAR could be 470 or 600 V in this configuration - just to provide different threshold for ignition? Thanks. 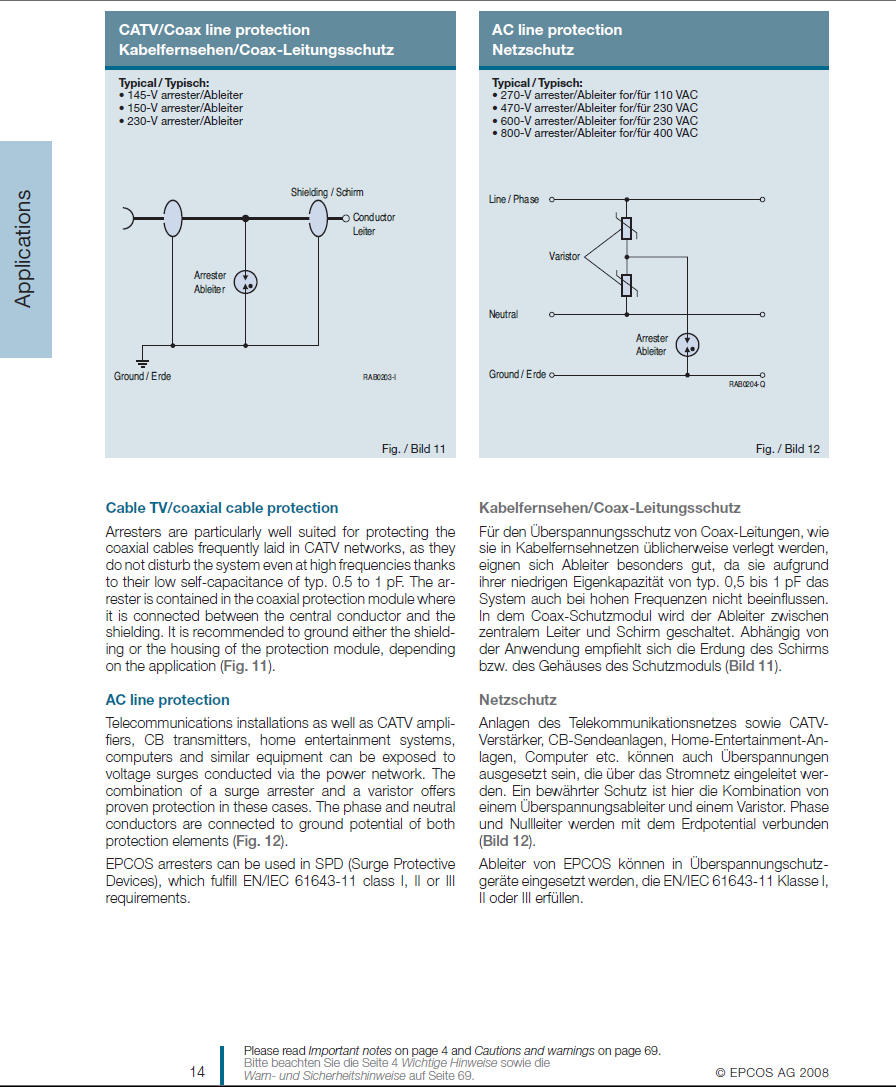 The combination of two MOVs in series with a surge arrester to earth offers you both common-mode and differential-mode surge suppression capabilities. A surge from line to neutral will be clamped by the series combination of the MOVs. A surge from either line or neutral to earth will be clamped by a single suppressor and the surge arrester to earth. The series MOV will also act to limit the current available to the arrester.

A single MOV (or two MOVs in series) works to clamp line-to-neutral surges but doesn't help you much for a line/neutral-to-earth surge. Splitting the MOV into two series elements with the arrester at the midpoint going to earth gives you the 'most' protection (at the expense of two extra parts.)

Surge arresters must not be operated directly in power supply networks. Because of the extremely low internal resistance of these networks, an excessive current which as a rule exceeds the permissible follow current would flow through the ignited arrester. The arrester no longer extinguishes and can reach very high temperatures.

Varistors connected in series with the arrester are well suited for limiting the follow current ... To stop the arrester from responding during normal operation, a permissible tolerance of the line voltage of +10% and a possible derating of the arrester of –20% were taken into account.

Your MOV value is VC1/2. and can connect line side(Load side got a fuzzy voltage level(on-start/on-stop)).

Not the answer you're looking for? Browse other questions tagged surge-protection varistor gdt or ask your own question.

2
GDT in series with varistor
0
Up=Voltage Protection Level of a surge arrester
17
Varistor? Purpose and principle
0
Surge arrester placement in substation
1
Why often is used a varistor 7D471K for 220-240vac surge protection rather than a lower nominal voltage one?
0
Varistor and TVS diodes in series
0
Crack in surface of varistor, likely bad?