Reliability problems with an array of 91 high-power LEDs

I have designed and printed a 4-layer PCB that accommodates 91 infrared LEDs in a 7x13 rectangular layout. This will be used as a backlight for a machine vision project. I am having a problem where individual LEDs are burning out or perhaps becoming disconnected from the circuit in some way. I suspect the heat dissipation may be the cause of the problem. 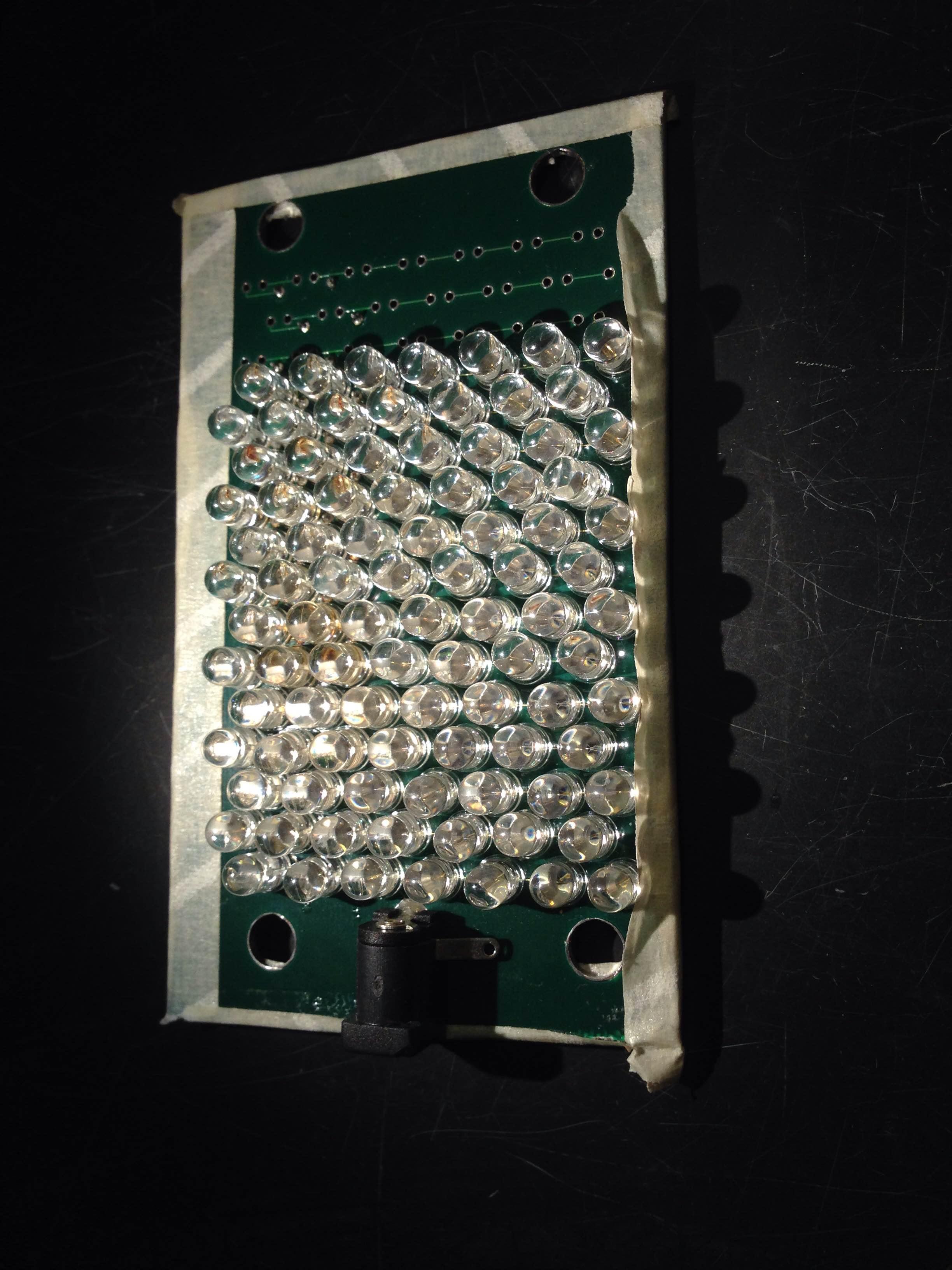 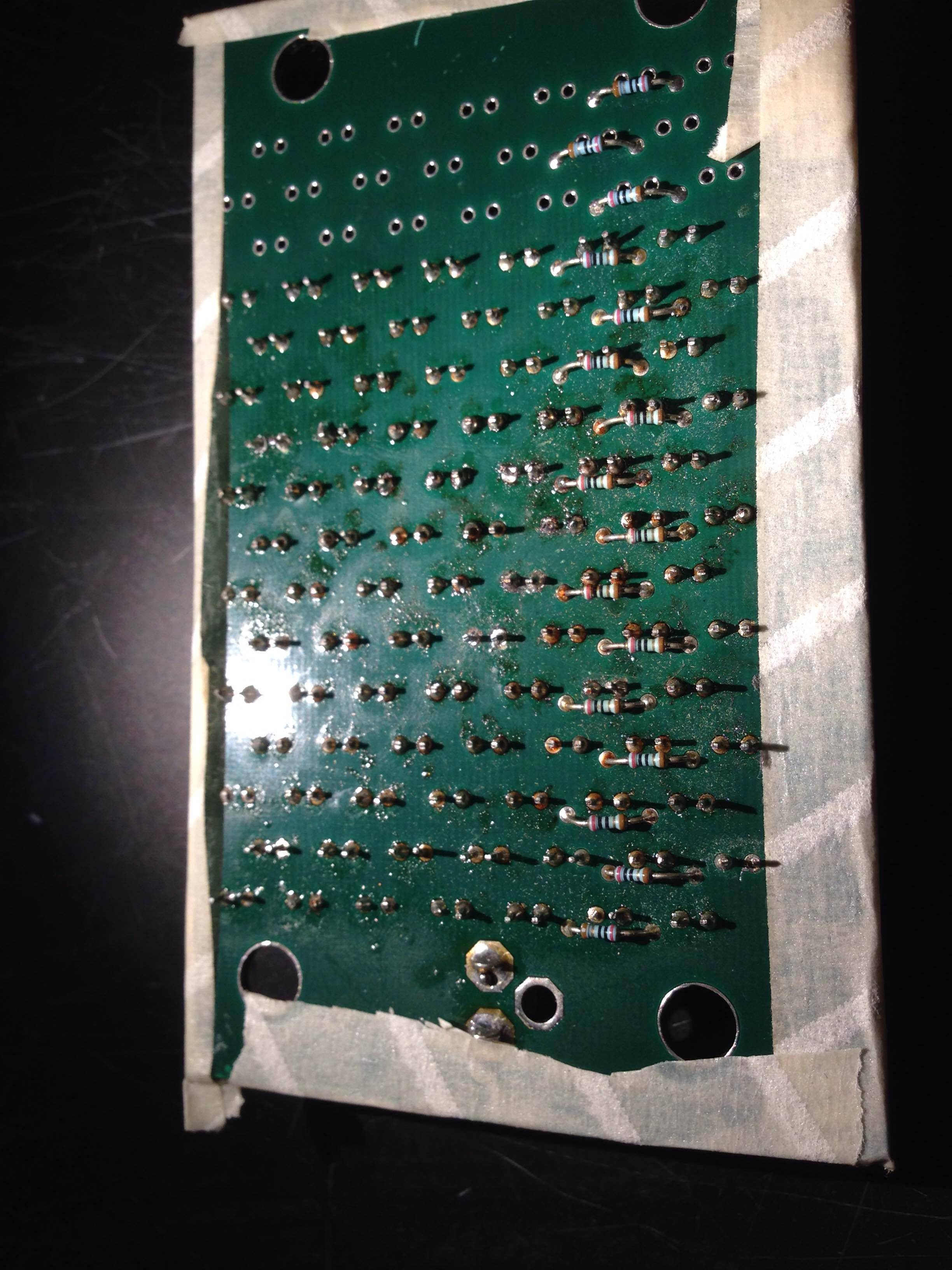 With a 12V power supply, there is about 1.45V over each LED, and about 2.0V over the current limiting resistor, meaning a current of 100mA. Because this is right at the maximum allowable current, I put a big high-power potentiometer between the power supply and the VCC plane, and used this to regulate the input voltage to be slightly lower (11.5V or so). This gets the current safely below the maximum allowable amount.

I am also using a Darlington pair to control the backlight with an Arduino. The backlight is on almost all the time, and occasionally is pulsed off for about 30ms. I don't think this is relevant to the problem but can provide more details if necessary.

After about 10-30 minutes of use, one or more of the rows of LEDs will go out. If I measure the voltage across each LED in the broken row, most LEDs are at about 0.8V and one has about 8.0V across it. No current is flowing. Sometimes resoldering the pins or tapping the LED fixes this. Sometimes it has to be replaced. In any case I only get another 10-30 minutes of use before another one goes out.

Another observation is that the whole back side of the board is kind of sticky. You can see this in the picture above. I wonder if it is getting too hot and the solder is becoming compromised (perhaps exuding flux??).

What should I try to improve the reliability? I've already tried running it at a lower voltage to get the current safely below the rated maximum. I wonder if I need to use a different kind of solder? Or some kind of heat sink? The LEDs get hot to the touch but not unbearably so.

Thanks everyone for the tips! I did something quite simple -- pointed a computer fan to blow air across the array -- and it worked fantastically! I guess this is really obvious to many of you but I was surprised at how enormous the difference was.

So we get into the "danger zone" of temperature well before reaching the maximum current per LED.

I ran it at 90mA per row and 34C for over an hour with no problems. Great!

You have already hit on the answer: your LEDs are getting hot. 15 watts may not sound like much, but it's building up and killing your LEDs. I suggest you get a thermistor and attach it to the center of the board, then monitor the temperature as the system operates. Even better, attach it to the body of one of the LEDs.

Because you're using this as a backlight, don't use narrow-beam LEDs. Use relatively wide beam units, and space them apart so air can flow through. If you can find a source of, let's say, 35 degree LEDs, install only every other one in a checkerboard pattern, soldering jumper as necessary. You'll only get half the total brightness, but that's barely perceptible, and the improved airflow should be a big help. You may also need to provide a fan with some ducting to keep the air flow through the array adequate.

And always include a temperature monitor. While not directly applicable, this YouTube video shows the principles of cooling. In your case, since you've got a forest of vertically standing LEDs, it is important not to let the LEDs touch each other, since this will block the flow of air. 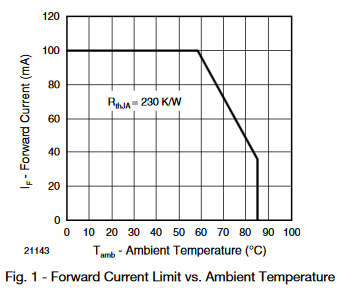 Current and temperature are your problems. You are running at absolute max current with no wriggle-room and you are allowing the temperature to rise. At 60° ambient the max current allowed falls off dramatically.

A quick google for "LED heatsink" will find you a lot of suitable solutions for cooling down your burning-out LEDs. My initial recommendation though would be to turn the top of the PCB into a heatsink layer and use thermal adhesive to stick the LEDs to it. I'm afraid that's more soldering, but hey ho.

For more info, I've found that Wikipedia has a link to various LED cooling tech which may be of interest.

2
Theory/equation for wiring a irregularly shaped LED matrix for row/column selection
3
problem with LED matrix and raspberry pi
2
LEDs intermittently non-responsive to short multiplexed pulses after high reverse voltage?
0
Level translator for led matrix
1
What is the correct current in the datasheet for the LED-Matrix?
5
Why does a 74HC595N work in LED matrices?
1
Led Matrix multiplexing: sinking/sourcing current + LED brightness
1
LEDs are not glowing with same intensity in LED matrix