I want to generate 1-150Hz+ three phase AC. Output voltage at maximum frequency would be around 240VAC and current around 40A. I have a few 60Hz three phase induction motors, drive shaft coupler, and a 480VAC feed three phase VFD. Yes I can build an excitation supply if needed.

What type of generator would I need to get the above output? What should I know about overspeed and induction motors? 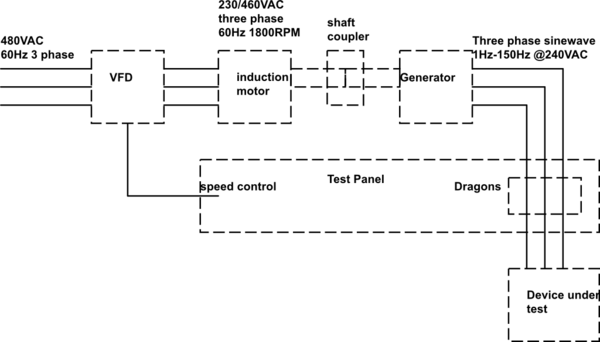 There is a good possibility that the VFD that you have can be adjusted to provide an output of 150 Hz at 240 V with 480 V input. You may be able to get it to operate at 1 Hz, but most motors won't operate very well at 1 hz. A good sensorless vector drive may be able to do that. You can probably not accomplish much trying to use an induction motor as a generator.

When operating induction motors above their rated speed the main limitations will be bearings and rotor balance. At some speed, centrifugal force on the rotor may become an issue, but that speed is likely to be significantly higher than the rating of the bearings and the speed at which rotor balance becomes a problem.

With standard motors, you can probably run a 6-pole motor at twice its rated speed, a 4-pole motor at 1.5X to 2X, and a 2-pole motor at 1.25X to 1.5X. If you don't increase the voltage proportionally for operation above nameplate frequency, the motor will not be able to deliver rated torque. You can probably get constant horsepower operation up to 1.5X rated speed. Above that, the torque must be limited to something below the torque that will provide constant horsepower.

There is no way that you are going to get an induction generator to give you the frequency range you are looking for.

The best option would to directly use the output of a VFD if you can get an acceptable waveform. An up-to-date PWM VFD will give you a a pretty good waveform. You can probably find one that will go down to 1 Hz or close to that. You could also consider using a VFD with an output filter. You may have difficulty getting good information about waveform quality. It may also be difficult to put together a filter.

For a really good waveform, the best option will probably be a permanent-magnet synchronous generator (PMSG). That will give you a good sine wave with no filtering. You can use a permanent-magnet synchronous motor as a PMSG. You use a PMSG that has more poles than the driving motor, your speed can be lower. You would need to consider the power factor of the load. I don't know how a PMSG will react to a power factor below 1.0. A VFD will have no problem with a lagging power factor down to 0.7 or so.

A wound-rotor synchronous generator (WRSG) can do as well as a PMSG, but you may have difficulty getting an excitation control unit that will work over your frequency range. Most WRSGs in the size range that you need are sold either with an engine or as "head" units designed to be bolted to an engine.

Do you need to put this together yourself or do you have a budget that would allow you to work with a system integrator?

A VFD will have considerable flexibility to program and adjust the output voltage, both independently and as a function of frequency. Generally, the adjustment would need to be done with the VFD output shut off, but it may be possible to configure a VFD for voltage adjustment while running.

It seems that a VFD will probably be the best alternative. If you don't want to design and build an output filter, there are suppliers of VFD input and output reactors etc. that will very likely be willing to supply one.

Here is a link to some basic VFD information.

Here and here are links to VFD output filter information.

Not the answer you're looking for? Browse other questions tagged motor three-phase vfd or ask your own question.