I have a Max V CPLD development board which has a 10MHz oscillator onboard. I hooked up CH2 probe to the output pin and then wrote a small VHDL program that output the clock to an external pin. I hooked up the CH1 probe to this pin.

My first question is, why isn't the waveform square?

Secondly, notice how the waveform changes shape when I disconnect the 1st channel? Why is this? The o-scope is a 50MHz 1GS/s Rigol. 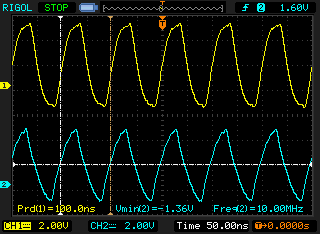 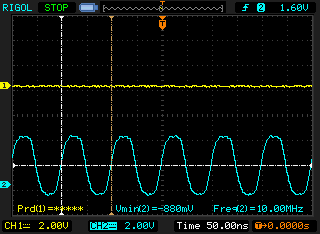 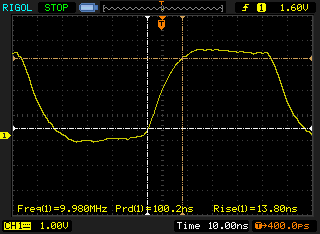 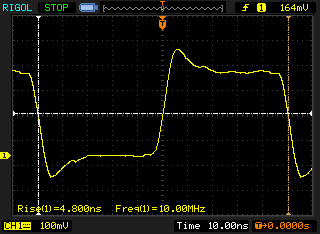 I think the biggest difference was made by connecting to the ground pad directly. But I'm puzzled - why does a wire or the distance between the test-point and ground make so much of a difference?

The waveform isn't square as your scope only has 50MHz of bandwidth.

A 10MHz square wave has significant frequency content at well above that. All you are seeing is the result of low-pass filtering at ~50MHz which means you are only getting the fundamental and a couple (at most) of the odd-harmonics.

Why is changes with two probes is also similar - you are adding more capacitance across the signal, which also acts as a low-pass filter. You may also be loading the oscillator more than it can drive "nicely". Check the impedance of the probes.

This one has me a little puzzled.

If in the left screen clip you have CH2 on the oscillator out, and CH1 on a CPLD pin which is buffering the clock signal, then I'm not sure why removing the probe from the CPLD pin would make so much difference.
If you had both probes on the oscillator output it's easily understood with the extra capacitance as Martin mentions, but as you described it they are not so something else must be happening.

As far as the waveform not being square goes, it could be a few things:

Firstly, don't assume the oscillator output is particularly square, it's rise/fall times may take up a significant portion of each cycle. Check your datasheet to see what to expect. I just had a look at a typical 10MHz CMOS oscillator, and the rise/fall times were given as 10ns, so that's 20% of each cycle and will not look that square. Here's a screen clip of a 10MHz waveform with 10ns rise/fall times, but with no high frequency roll off. You can see it's not far off what you are seeing in the right hand screen clip.

Secondly the probes can be set to 10x so they do not interfere with the oscillator output as much and the effects of capacitance are reduced, the ground lead should be as short as possible too, ideally you remove the ground lead and use a clip on the tip of the probe to the nearest ground on the PCB (e.g. oscillator ground pin or nearby)

I think a 10MHz (true) square wave shouldn't look too bad on the Rigol, I would expect it to look a lot better than the clips on the left anyway. Although the bandwidth is given as 50MHz, it will pass some higher frequencies as the roll off probably won't be so sharp. So you might get quite a bit of the 4th and 5th odd harmonics. One way to get a reasonable idea of what to expect would be to feed e.g. a 100MHz sine wave of known amplitude and see what you get on screen.

For reference, I just took a clip (from this video) of a 50MHz Rigol displaying what I believe to be a 20MHz square wave: 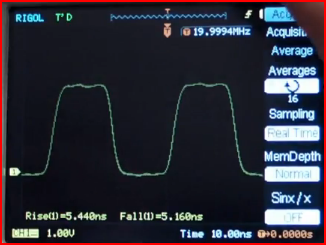 EDIT - Those clips look a lot better. The reason the distance between the signal/probe ground point makes such a difference is the extra inductance added. This can cause the high frequencies to be attenuated. As mentioned above, ideally you would unclip the ground lead and use a small wire/clip instead to the signal ground point in order to make the loop as small as possible. Note that it looks like you may need to compensate your probe correctly - see the links below for tips (or your scope/probe manual)
If your scope has a probe calibration routine then run this.

Not the answer you're looking for? Browse other questions tagged oscillator oscilloscope clock or ask your own question.

9
How much background “noise” is normal on an oscilloscope
2
System Clock Ringing
2
Why does my power supply show a signal on the oscilloscope when off?
1
IR2110 - measuring Vb to Vs kills MOSFET
3
50Hz hum on oscilloscope probe only when using clip
4
SPI clock - slow frequency but fast rise time issue with waveforms
14
Cheap oscilloscope showing 16 MHz square wave
1
Oscilloscope and Electrical Safety