Why are RF components and cables still so large?

With the advent of ICs in past decades, circuits have decreased in size exponentially over time. However, it appears RF components and connections, with coax SMA cable, connectors, and components, like the one below, are still hefty and large: 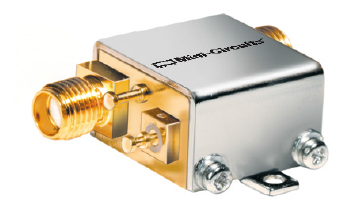 Why have they not shrunk? Why can't coax, as you see on the side of the this amplifier, be decreased in dimensions?

Why can't coax, as you see on the side of the this amplifier, be decreased in dimensions?

It's all down to characteristic impedance of cable: - 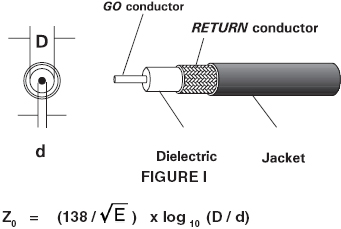 If you plug in the numbers, to obtain a centre conductor thickness (d) that is not unfeasibly small, dimension D cannot be to low. For instance if d = 1mm then for a relative permeability of 2.2, D has to be about 3.4 mm to obtain a 50 ohm characteristic impedance. Then on top of this is the thickness of the screen and the plastic outer covering.

These numbers scale down ratiometrically but imagine having a centre conductor of 0.1mm - how reliable will this be and just how much current could it carry?

For 75 ohm systems and a 1mm centre conductor, dimension D needs to be 6.5mm (relative permeability of 2.2).

Characteristic impedance is important just in case you weren't aware of this.

Because the goals are not the same, you are basically comparing a lawn mower with an attack helicopter.

IC and components in general have reduced in size due to improvements in the manufacturing processes and technique allowing to make smaller components and improve encumbering or power consumption.

However, SMA cables or the bias-tee you show are not designed for this. They are mostly used as lab equipment. They follow strict standards to be able to have a 50 \$\Omega\$ (or any other, but 50 is the most common) characteristic impedance and calibrated losses per meter. But also, they need to be serviceable, modular and most important : reliable in terms of time duration and of physical properties (most of lab equipment calibration is usually guaranteed and if you find out, as an example, that a just received -5 dB/m cable is in fact -6 dB/m, it's grounds for immediate refund).

RF signals in circuits are not carried by SMA cables but typically with microstrip lines, or any other miniaturized technique, but at the cost of properties cited above (reliability etc...)

Besides the impedance mentioned in other answers: Because they don't need to, or in other words there is not much market demand.

I am mostly referring to items like the one you showed an image of. They are mostly (if for some not exclusively) found in lab or prototyping environments where quality and serviceability is valued more than size. And if you opened up the bias-tee you showed there, you will see that for the 100 bucks it costs it already is pretty small and has quite a range (up to 12GHz) it has to work with.

As andy said, impedance is quite much about physical relationships of conductors to each other, not only in coax but also on the pcb and to a degree with the components.

Having more wiggle room there for the lab grade components is much more important than having them in the smallest size possible. Also for certain price margins you probably want to be able to replace the fuse/TVS/whatever protection blew inside it instead of buying a new one if you mishandled it.

So from that also follows that for this kind of devices, UFL coax is nonsense because it doesn't gain you anything.

If you look around however in modern consumer hardware then you see lots of tiny UFL coax (about every wifi enabled laptop or router these days uses them) but there you don't have the necessity to be useful in a wide band and it only matters if you match the characteristics in a very narrow band.

The ratio of inner to outer diameter is set by the desired characteristic impedance and the materials used. For low loss low reflection behaviour you want to tightly control that ratio.

You can make coax smaller but it gets harder to tightly control the size ratio, the loss per meter of the cable gets higher due to higher resistance and the hardware gets less robust.

In a lab or industrial environment robust generally beats small. It's not so much about connecting and disconnecting the cable in question but about inadvertantly applying forces to it while working on other things in the area.

You can make the overall size of the system smaller by putting more stuff on one board or on multiple boards in the same box but doing so costs you flexibility.

Inside a compact device like a laptop or a wireless router, a few cm of lossy cable is not a problem, but for a larger setup the performance hit is too much.

We also use BNC connectors and banana plugs/jacks for test equipment (probably WWII-era designs or older), even for low frequencies. Sometimes it's for high voltage but often it's just because that's the standard, it works well enough over a wide range of frequencies and voltages, and nobody wants to have to muck around with adapters to throw together a test rig.

Strength plays a part as well. RF hardware uses standard connectors, and these connectors can be housed anywhere from the calm environment of the underside of a desk, right through to outdoor installations, where they will be exposed to wind, rain, snow, sleet, and anything else that the weather throws at them. A flimsy connector, along the lines of what you used to see connecting an antenna to a PCMCIA wireless card for instance, would not last a day in those conditions.

Implied but not stated is the current. A 1.2V signal on 0.1 ohm requires 12 Amps, on your 0.1mm wire. Low voltages are very noise sensitive. You can design a PC board with known components and 10mm land between known components.

How useful is a very thin 12mm long cable connecting two boxes. You must think about systems and SNR. What happens when the resistance of the wire exceeds the characteristic impedance of the wire? Power is voltage squared divided by the resistance. Current coupled signals are very sensitive to path lengths and reflections. You want to change the infrastructure. (Think of all the changes caused by USB. They did shrink the connector size, but it still must be handled by human fingers. Try to change a middle IPC connector in a 9X12 maze behind a chassis. You have to start at the edge and work your way in.

Not the answer you're looking for? Browse other questions tagged rf coax or ask your own question.

37
Why were coax cables used for networking?
5
Why do cables that carry RF have 2 leads
0
Distributed Transmission Line, Characteristic Impedance in AWR Microwave Office
12
Are TV coaxial cables compatible with WiFi antennas?
43
What is wrong with my 50 Ω grounded coplanar waveguide?
2
Soldering RG-405 coaxial cable directly to PCB pads meant for U.FL connector
0
What are these fuse-looking cartridge case components on small, battery operated RF tranceivers?
1
Why are there 3 conductors on a coaxial BNC connector and 4 conductors on a triaxial BNC connector?