My first question here so bare with me if I'm a bit "off" or so regarding the level of knowledge etc. My purpose is to try to learn things. So I started off by buying some LED lamp DIY kits of this kind:

Now, I have assembled one and tried to understand the components and what parts they play. As I understand (please do correct me if I am wrong on any part) the LED driver is a "capacitive dropper" containing a current limiting thin film capacitor with a "discharge resistor" in parallel so that there won't be any energy left if I unscrew the lamp and touch the Edison screw fitting of the lamp. As I understand I can make the lamp run dimmer and thereby save lifetime of LEDs by choosing a smaller value of the thin film capacitor (as long as it is still rated for 400V at least if I have 240V rated AC outlet)?

Further there are four diodes for making up a "bridge rectifier" - in practice removing the negative side of the AC sinus voltage. There is also an electrolytic "smoothing capacitor" of 4.7µF 400V rating and a resistor in parallel to that. The capacitor is meant to smooth out the hunchback voltage after the rectifier. Then there is also a resistor in series with the LED beads to limit "inrush current" maybe...

Now, I have assembled one such set using some white LED beads and it seems to be working (yay :) ), all LED beads light up and that's great! But, the lamp does flicker even with the smoothing capacitor in place so my guess is that it is under-dimensioned for the lamp setup, but I am not sure I am correct?

Using this lamp DIY kit as a concrete example, how would one go about dimensioning the smoothing capacitor (and any other parts that would have to be replaced with different values)? The goal is to get a flicker-free lamp (to the extent possible).

So, here the electric infrastructure is 240V AC 50Hz. The LEDs seem to arranged in parallel pairs in series (30 pairs making up a total of 60 LED beads).

I have Googled a bit but I am still a bit unsure of how to go about this correctly. Thank you for your help!

UPDATE: Picture of schematic added. It was not included in my kit, but I found this which comes from a kit just like mine (only it has 38 LEDs).

UPDATE 2: Now I also found a second schematic, with the difference in "current limiting capacitor" value between the 38 and 60 LED models. All other parameters are the same (except number of LEDs, but they are connected in the same way) as depicted there.

UPDATE 3: I found this on a forum (http://www.fieldlines.com/index.php?topic=143017.0) with regard to sizing a smoothing capacitor for minimizing ripple:

You have to decide max ripple. You can never get 100% clean DC. Then the reservoir capacitor can be found using:

I = average load current drawn on DC side

t = duration between charging cycles and is equal to: 1/twice mains frequency.

So, am I doing this right? I = 0,04A (20mA through each LED, connected as parallel pairs) per schematic below

As for choosing V - the maximum allowed ripple, let's first calculate what 4.7µF would give me for the 38 LED beads lamp.

But how much ripple should I aim for?

** UPDATE [YYYY-MM-DD]: 2016-05-01 ** I have received the 10µF 400V capacitors and I have tried to replace the 4.7µF included one with the 10µF. The results are noticeable but the flicker is still there. I tried to connect 2 x 10µF capacitors in parallel for a total capacitance of around 20µF in another lamp and yes that was one notch better still. However to get rid of the flicker completely I will need more capacitance as it seems. Probably 33µF-47µF would do the trick. I will have to wait for the 22µF, 33µF and 47µF capacitors to arrive (hopefully within a week or two) and see if what size I can fit as well as what the results will be.

WARNING: BE AWARE THAT WHILE THIS TYPE OF CIRCUIT IS POTENTIALLY ACCEPTABLE FOR USE IN A WHOLLY ENCLOSED DEVICE, IT IS LETHALLY DANGEROUS TO TOUCH ANY PART OF THE CIRCUIT. All parts of the circuit should be considered to ALWAYS be at full mains voltage. 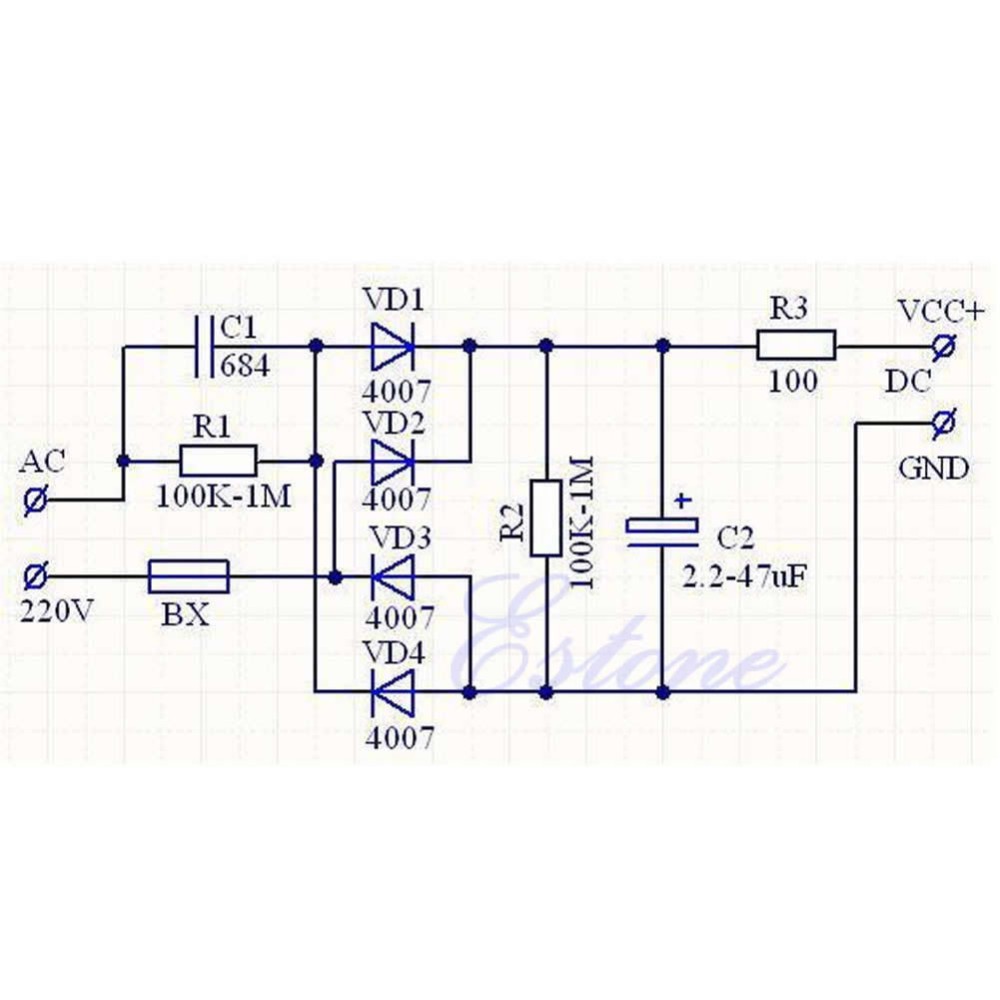 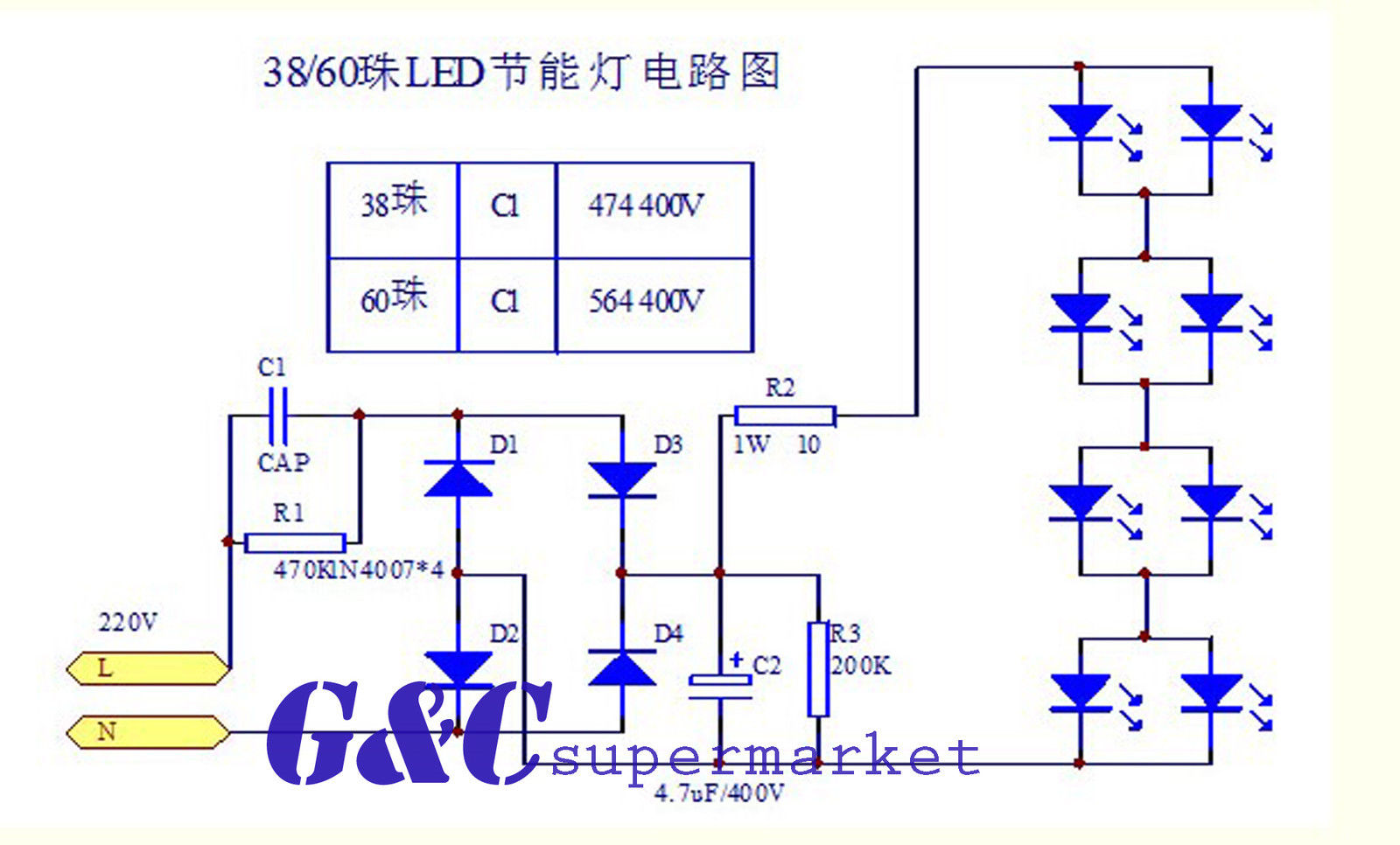 As shown when comparing 38 and 60 LEDs, the "dropper" cap size affects the current capability of the circuit, so I recommend using one larger than the recommended for the 60 LEDs. Also, I would recommend a "smoothing cap of at least 47uf 400v, or as large as you can get and fit in the space available. I believe these changes will remove the flicker.

Not the answer you're looking for? Browse other questions tagged led capacitor electrolytic-capacitor led-driver lamp or ask your own question.

7
Power LED bed lamp from mains
1
How to calculate ripple/smoothing cap for vintage motorcycle LED headlight conversion
26
LED and lamp in series - why does the bulb not light?
0
Led lamp and resistor
1
LED Flickering on Mains
1
Smoothing capacitor burns out while I am trying full wave rectifier
1
Making a 100 LED Lamp
1
LED lamp - connecting LEDs in parallel
6
How to determine value of a smoothing capacitor
2
X2 polypropylene capacitor for DC smoothing after AC rectification