Can I pedal power a laptop device while the device is being used?

I want to research how easy it would be to use a small laptop device while powering it by pedaling on a stationary frame. (For example, using a tablet on an exercise bike, or using a netbook while pedaling at a desk.)

I already know that it is possible to run a laptop with pedal-power, because I have found several examples of this being done. [1] [2] I now want to construct such a setup for my academic study. I need to confirm exactly what I need before purchasing the equipment. I do not have a background in electrical engineering, so although I have lots of numbers I don't know what I need to calculate or consider to pick a feasible option.

POSSIBLE ARCHITECTURES: Apart from the seating arrangement (bicycle, recumbent bicycle, desk) there seem to be several options for how to hook the equipment up:

I'm very confused about a way forward at this point (even if it seems like I'm not). What I am looking for most of all in answers is clarity and definitiveness.

Of these combinations of devices (1-3) and architectures (1-3), which will definitely work?

Which combinations should I strike from the list as they categorically will not?

The dynamo architecture looks good to me because it seems easier/cheaper to hook up - is it capable of powering all these devices, even the netbook?

Background: I used to design controllers for exercise machines. The machine drove a 3 phase alternator and a resistive load was applied to suit various criteria.

I have carried out load tests with a specific view to establishing how much power users can readily make over an extended period in order to power electronic equipment or charge batteries.

Consider a moderately fit person to be one who could walk briskly on a level surface for an hour and be tired but not utterly exhausted in the process. ie not super athletic in capabilities and not even "extremely fit" - but well above "couch potato" fitness.

Using a good quality alternator a moderately fit user can supply 50 Watts mean for an hour. This is a level at which you definitely know that you are exercising but it would be bearable for many.

The same moderately fit user could supply 100 Watts for an hour and be extremely tired.

if you were aiming at a frequent powering task, 50 Watts would be far preferable to 100 Watts.

The above assumes a good quality reasonable efficiency system. Ideally with minimal "cogging" or saliency - ie no slow speed jerkiness to drive as magnets approach and recede from coils. Some systems use generators with substantial gearing ratios using chain drive. These could be reasonable but usually aren't. Belt drive to a low saliency alternator can be made to work well.

Note that the claims made on the website provided tend to contradict themself. I'd estimate the mean output as shown on that graph as being 60 - 70 Watts range. Their graph:

Far more in selected cases - such as
Gossamer Albatross - 1st man powered flight across the English Channel June 12th 1979. . !!! :-).
About 300 Watts continuous in still air and no turbulence. "Rises rapidly" with turbulence.
Another day at the office for Bryan Allen. (day job ) - 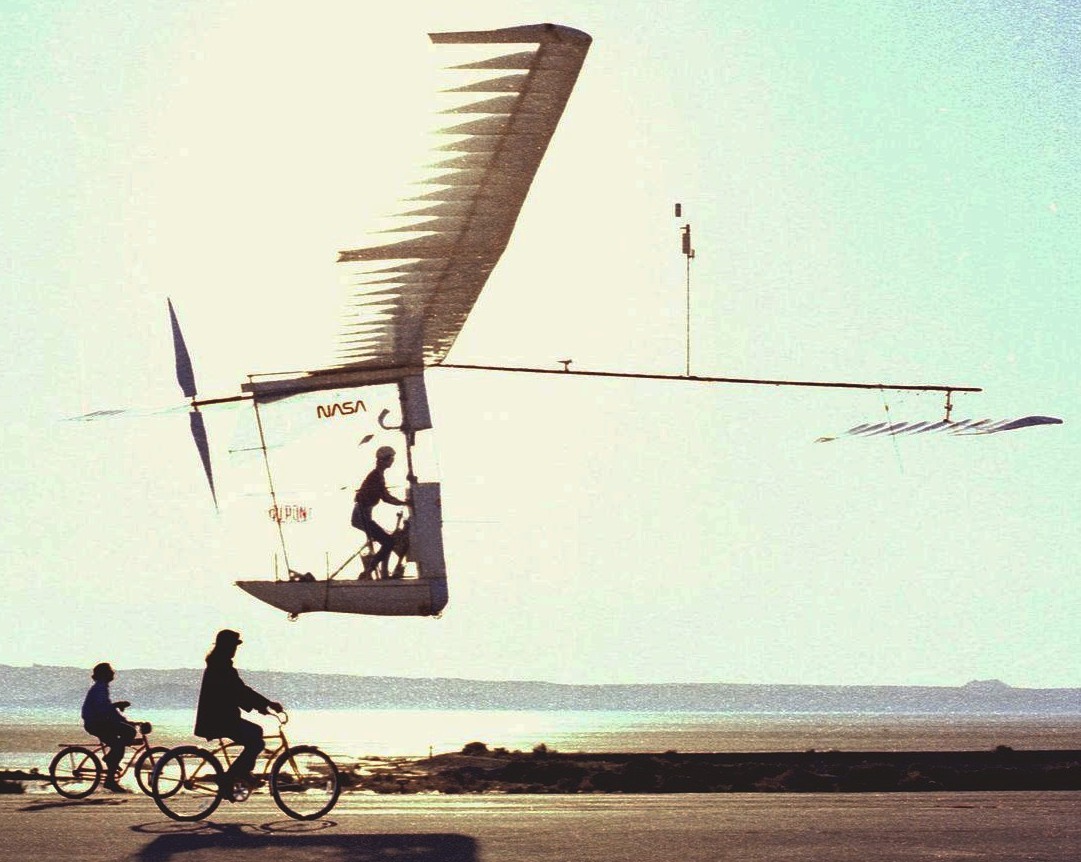 I can do 500 Watts for about 10 seconds, after which my legs turn to jelly and I'm utterly exhausted.

Any of these could work well or be terrible if badly designed.

It's not clear what you mean by wheels / pedals.
Powering from a wheel rim as shown may work OK - and may be what you mean by "wheel". Main aim is low loss, no jerk or unevenness. Ideally a steadyish non cyclical load.

Some of these do look good - on site you referenced.

Best is an AC alternator - preferably 3 phase or more. As shown below, a 3 phase waveform does not drop to zero at any stage. Rectifying this and filtering produces an even smoother result. More than 3 phases gives an even better result but is rare. A DC generator is an AC alternator in which the the rectification is provided by a commutator and brushes - as the voltage levels change a new winding is selected by the commutator rotating a new winding contact under the brushes. While the principle is similar to using an alternator with diodes, with brushes you generally get more mechanical drag and losses than with an alternator. Most generator (DC) offerings will be DC moors being driven as generators - the two roles are interchangeable but a machines designed for one will tend to be less optimised for the other. 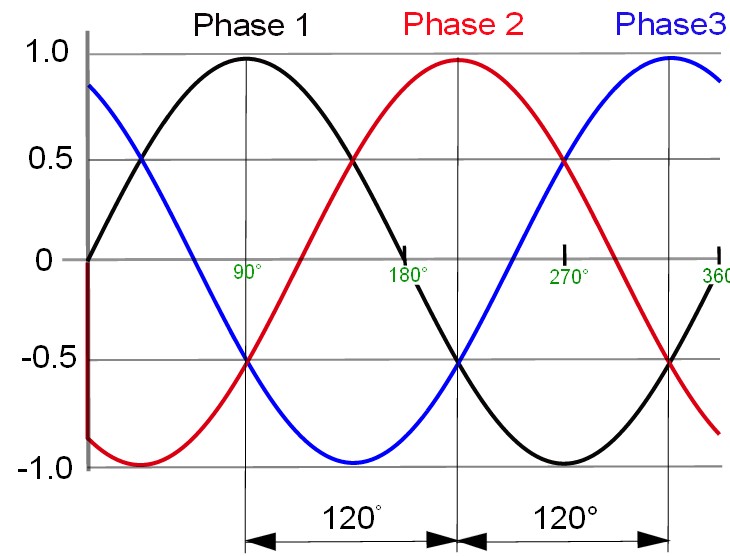 The rim-powered motor based dynamo which you cited is OK in principle but likely to be horrendously inefficient in practice due to mechanical issues. As a child the many rim dynamos that I saw were all terrible so I was surprised to see modern units which do this reasonably well - it's a matter of actually knowing what you are doing mechanically with shaft alignment, gearing, surface friction etc. A "dynamo" of sort will typically produce 1 to 10 Watts output. With an efficient system, you'd notice 10 Watts when cycling and would almost not notice 1 Watt except under very light load conditions or coasting.

Some form of battery storage is almost essential. A laptop or tablet etc will have its own unless removed. Towards the lower limit, a more than usually netbook of tablet may get 6 hours from 3 x 18650 LiIon cells. Say 3.5V mean x 2 amp hours x 3 = 21 Watt hours. So operating over 6 hours = 21/6 = 3.5 Watts. Big laptops may get as low as 2 hours with 6 or 8 or 9 or 12 cells so say worst case 20 to 30 Watts. The rate they will charge their battery packs at is not directly connected but obviously a bigger pack takes more energy. A larger charger may specify 19v x 5.5A = 110 Watts. A single 2 AH 18650 LiIon cell (as used in combination in most laptop batteries) requires about 10 Watts peak to charge (4.2V x 2A + some "headroom") so the above 110 Watts is about right for the very largest of battery packs (12 cells). This is for about the first 40 minutes of a charge cycle from fully "flat". After that the cells go into a constant voltage tapering current mode.

I'll probably get slammed for this, but.. you guys are all thinking like, well, electrical engineers. Why hasn't anyone even mentioned the mechanical advantages of large flywheels, gear ratios to driving generators, etc? Spin-down time on a flywheel vs. energy required to get it moving should definitely be a factor, since a human being is not a pure energy in-energy out machine. The Powertap on my TT bike says I can put out ~400 watts or so for an hour, during my best race of the year. In an out and out max short effort, I can hit 16-1700, and bigger guys than me break 2K regularly. However put me on my trainer with it's tiny flywheel (not a very PRO setup) and the spin down effect once I stop pedalling makes me forced to put out more effort to maintain the same speed. The solution to the problem isn't optimizing for a steady output, it's realizing that a constant output is near impossible with a human, and that a fresher human can output more power to get started than it takes to keep going once moving. Same as the stand up and go at a stop sign effect.

I would probably go with number 3, with a slight modification.

Unless you are pedaling at a perfectly constant speed, the voltage will probably vary pretty widely. Varying higher than the regulated voltage shouldn't matter too much, but lower would as the regulator will need a minimum input voltage to operate correctly.
You could get a very wide input range switching regulator, but that still wouldn't allow for a complete stop (or near to)

EDIT - regarding the external battery, for some reason initially I was not considering the device battery. I think that you could do without but since you asked which of the 3 will definitely work, for the reasons mentioned below I would probably stick with it. The MIT link you gave mentions using a 12V battery and a cigarette lighter 12V -> 19.5V converter, this would be an easy way of providing the input voltage if you don't want to mess around with switching regulators.

So some storage of power is a good idea (although you don't actually mention anything about allowing for slowing/stopping pedaling)
You could use some large (super) capacitors (or even a largish flywheel) but at a reasonable wattage it won't give that much leeway, so I think a small battery is the way to go.
I would have the generator -> charge controller -> 12V battery -> boost (or buck depending on device) converter + filtering -> laptop/tablet input.
I wouldn't bother with using the laptop/tablet supply and inverter as it will be more inefficient than simply using a DC to DC converter. With adequate filtering (a couple of capacitors and inductor/ferrite bead) and transient protection (e.g a TVS - transient voltage suppressor) this should be fine.
I would probably choose the tablet, or a lower power laptop as 30-65W is a reasonable amount of power to keep up for a long time, whereas ~10W for the tablet would be much easier.

I can remember, as a kid, having dynamo lighting on my bike - and nearly getting run over when stopped at a junction because my lights went out!

Conceptually, yes, a pedal-powered generator (whether dynamo or DC/DC) can be used; and I'd most certainly go with option (3) otherwise you could be wasting power if generation exceeds demand, or losing power if demand exceeds generation.

In many respects, (3) maps with the current paradigm in electric vehicals, which are using a small engine as a range-extender generator, rather than as the motive power.

Not the answer you're looking for? Browse other questions tagged power generator or ask your own question.

6
Can Thunderbolt be used to power the host device?
11
The electricity grid: what keeps small power generators from being 'driven' by large ones?
1
How does one estimate the electrical power of a power plant?
1
how to compute the average power from AC generator
0
If a USB Cable is being used between two devices, are the power wires needed?
1
A device used to logically turn on a circuit with voltage being the input parameter
2
What can happen if the power factor of one generator becomes leading?