How can I determine the specifications of this LED (photo included)?

This LED (and 8 others like it) form the lighting component of a ceiling fan assembly. Unfortunately, they put out a very dim and cold light, and I'm interested in replacing them, but I figure I need to determine what I'm starting from before looking for replacements (although any suggestions on what to look/search for are welcome). 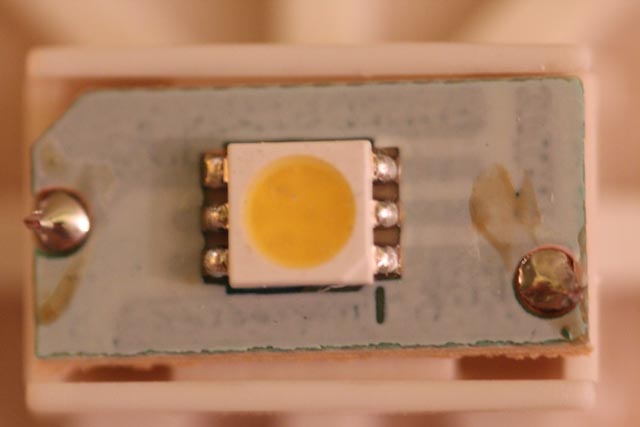 What Oli says, plus:

See "ANSWERING THE ACTUAL QUESTION" below - but do read the rest as well.

If there are markings on the LEDs it would help greatly to know them.

Some such LEDs have 3 dies in the pkg which are brought out separately on eg pins 1-6, 2-5, 3-4 as viewed here and the user can join them in series. This does not seem to be the case here. The pins MAY be connected underneath but it seems unlikely.

Note that the top left and bottom pins (1 & 4) connect to the adjacent contacts by wider copper tracks while the rest have apparently unconnected tracks.

Be aware that the LEDS may be being fed with DC with a strong 2 x mains frequency component if an attempt is being made to power factor control the load (unlikely but ...).

Also, as part if a ceiling fan, they may have a low voltage winding acting as a transformer winding from the motor. This may lead to unusual waveforms.

If you can determine how steady the DC feed to the LEDs are it would be good. As they MAY be floating wrt ground this may involve a floating differential measurement involving mains. Not hard but you do want to know what you are doing and there are safety aspects to consider.

The following is written on the assumption that the LED supply is reasonably steady conventional DC. Worst case you would get voltage and current readings that are wrong. If LED Vf varies by much from 3.3V say then you may suspect interesting happenings. Lowest Vf you are liable to see with white LEDs is about 2.7V and highest is about 3.7V. More like 3.3 +/- someis usual. (The Raijins I mention below run at about 2.95V at rated current as a part of their overall awesomeness. This low is rare at full current. )

Measure voltage across contacts (same as pins 1 & 4).
This will be 3.xx Volt OR a multiple of this.
Record and report.

Multiple occurs if there are 2 or more dies in series in package. Happens.

Probably in series but not certain.

Hopefully they are not all in parallel - unlikely but happens.

You now know the voltage and current of LEDs that can be used as replacements.

Tell us what you measure and we can advise best superior replacement.
UNTIL you do the above you could find that a replacement was "just wrong".
It may not light at all or may die instantly.
Both are genuine real-world possibilities.

Look for pin compatible parts, same number of die per package (1 ~= 3V, 2 ~+6.xV, 3 ~= 10V) and. most important, maximum possible number of lumens at available current. If you want a yellower light you'll want a loer "cplour temperature" - say more like 3000 degree K than the 6000+ that bluish LEDs have.

Be prepared to be disappointed IF current is low. IF these are 20 mA LEDs as they might be then may power may be 20 ma x 3.3V say x 10 LEDs = 0.66 Watt. The best LEDs will have outputs combined of the equivalent of 5 to 10 W of incandescent lighting. Higher currents = higher power = more light.

The best you can get at low currents:

If Vf for one LED is 2.5V to 4V say (either extreme unlikely) and if string current is under 50 mA (say 15 mA - 30 mA most likely) then you will get more light per available energy than from almost anything else on earth in the size range by using Nichia NSPWR70CSS-K1 LEDs - Nichia codename = Raijin.

These are NOT surface mount but may be able to be adapted - the pin positiin match and can be surface soldered - the height may be excessive in your application. 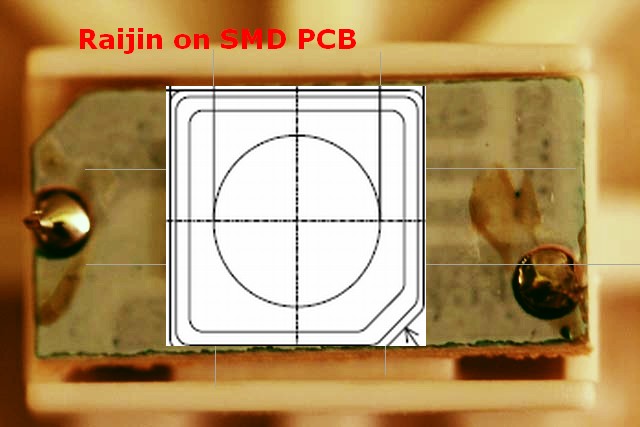 Photos of illumination need great care to be objective and this is rushed, but this is what you can achieve with 1 x Raijin at about 130 milliWatts. More comment on this LED if of interest. 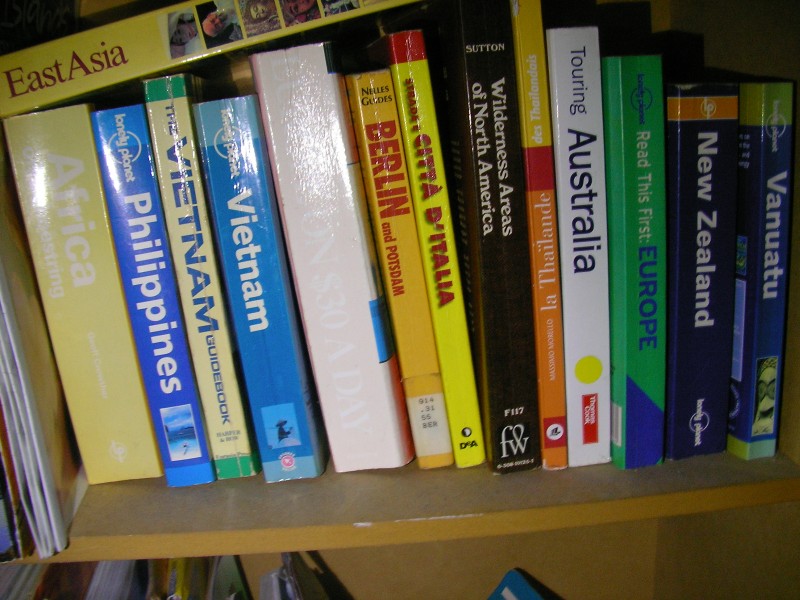 If you have more than 50 mA available then the Raijin is not the best choice.

A Cree CLP6S-WKW or CLP6S-MKW has been suggested as an example of an LED that youd fit in this locaion. It would, but see my comments else where re Vf and current.

Cree make some utterly superb LEDs. This is not one of them, alas.

Vf per LED is strangely high at 4V typical and 5V max !!! - they may even include an internal resistance!. This is too low to be 3 x die in series so each ie must be 4V+!.

To improve brightness you want more lumen so need more lumenr per Watt in a given situation.

Please measure vf and Istring as above so we can know where to go next.

If you do not have an oscilloscope or cannot safely measure a floating point then the following MAY help to test whether LEDs are fed with steady DC. They probably are, but ... .

Cheaper multimeters, when measuring DC volts on an AC range, will often display double the actual voltage. eg on a 10 VAC range 3 VDC may display as 6 VAC. We can use this "feature" to advantage.

See if you have a meter that does his. Measure eg a battery on a DCV and ACV range. If ACV = 2 x DCV we have a "magic meter" that can be used as below.

Using a magic meter as above, Measure voltage across ONE LED using DCV and ACV ranges. If ACV = 2 x DCV then voltage is essentially pure DC. If ACV strays from 2 x DCV then AC is probably present. AC readings higher or lower than 2 x DCV may occur depending on AC + DC components. Not a certain test, but a potentially useful one.

Brief review and comments here - the real lifetimes are better than their tests - they are abusing them somewhat thermally.

Anyone know a US or UK source?

It looks like a pretty typical high power LED like this.
Here are many more options from the search it came from.

I think that any option from those results will likely be very similar Vf specs wise (3.3-3.6V Vf) but the pinouts/current rating may vary. I think the notch on the bottom right may be for the cathode (e.g. pin 6/bottom right) and the top left pin (pin 1) the anode. What I can make out of the traces looks like it might confirms this, but you need to investigate more.
You can test your LEDs Vf quite easily with a multimeter (also current if necessary) The current in these packages seems to range from 30mA up to ~700mA.
Remove the 6 pin search filter and update the results to look for other options.

It looks like it has a CREE style emitter arrangement, where the emitters are placed in a triangle. It could also be a copy/knockoff from any number of second tier LED manufacturers.

The form factor is pretty common. You can probably replace it with any warm white LED in a similar package. It is not common to have common anode or common cathode in a PLCC6 package, but but check to make sure.

You are unlikely to get a significantly brighter LED at the same current. Especially if you go to a warmer white as their lumens output is slightly lower. If you increase the current, the LEDS will run hotter, so you need to make sure you have adequate heatsinking.

Most of these packages are specced at 3 x 25-50 mA. These packages does not have a thermal pad and are cheap to manufacture (and easy to replace), but there is a limit to how much power they can dissipate. Here is one that can take 3 x 50mA, and has a decent CRI for it's type: http://www.cree.com/products/pdf/LEDlamps/CLP6S-WKW&MKW.pdf

*For anyone in the future having a similar question, please provide information about the light fixture itself, such as the fixture's total maximum brightness (lumens).

Since different 5050 SMD LEDs produce different amounts of light, it is difficult to pin down exactly which 5050 LED you have from the information given. For example, it would be super helpful (critical actually) to know the maximum light output (lumens) of the fixture. From the output of the fixture, the typical "brightness" of the LED device shown could be determined (divide the total max lumens of fixture by the total number of LED devices in the fixture). From there it would me fairly easy to determine which LED you have, and very importantly its forward voltage and forward current requirements.

The fixture is designed/built to produce the amount voltage and current that this particular LED requires. So you have to replace the existing LEDs with significantly more efficient LEDs (2835 SMD) that operate best with the voltage and current provided by the fixture.

Anyway, below is almost certainly the parameters of the 5050 LED we are dealing with:

Not the answer you're looking for? Browse other questions tagged led identification or ask your own question.