The Atmega328 pro mini outputs 5v on the vcc pin while the ESP8266 can handle max 3.3v. How much resistance do i need to make the voltage drop so that i don't damage the module?

When i use that resistor the voltage doesn't even come within the 3.3v spectrum What am i doing wrong?

There is something even better, people invented IC's that have all this in the same package, its called a voltage regulator. They even make fancier versions of a voltage regulator that make the "control" resistor switch on and off millions of times a second to give the right voltage, these are called step down DC to DC converters. 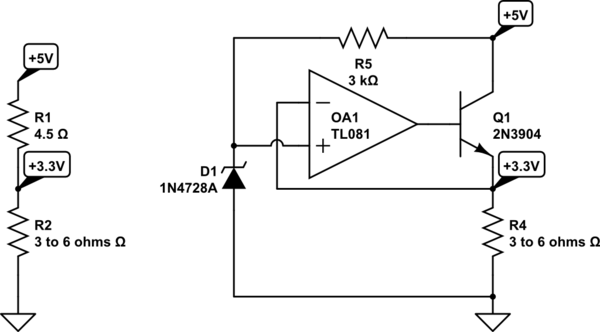 You don't want a resistor, you want a voltage regulator. Those take a input voltage over some range, then make a steady but lower output voltage.

There are many models to choose from that can make a fixed 3.3 V from 5 V in. You need one that can work with 1.7 V headroom and handle whatever the maximum current of your device is.