I'm trying to determine the common mode gain and differential mode gain of the follow amplifier. 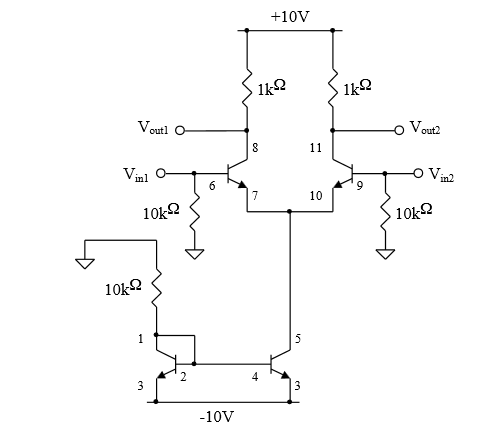 Also how would I go about determining these given the current mirror connected to the emitter of the amplifier?

Similarly, starting with the previously analyzed case of both inputs at 0, raise the positive input 1 mV and see what you get. The differential mode gain is then the resulting output change divided by the differential input voltage change (1 mV in this example). If the output clips, then the input change was too large. In that case, make the input change smaller and try again.

EDIT: My answer was updated. In the first version, by mistake I have assumed that the common-mode input resistance - instead of common-mode gain - was asked.

Rather than providing the complete formula for the common-mode gain, I like to describe the way how to derive the desired result. This should enable you to solve the task by yourself.

As you know, gain is the output-to-input ratio. For common mode signals it would be, in principle, sufficient to consider one input only because both transistors are doing the same. Therefore, looking into one input only you have to analyze a simple common-emitter stage with negative feedback caused by the resistance in the common emitter leg. This feedback effect, of course, drastically decreases the common mode gain.

In the present case, feedback is provided not by an ohmic resistor (Re) but by a differential (dynamic) resistance (re). This feedback resistance re has a finite value (output resistance of a bjt identical to the inverse slope of the Ic=f(Vce) characteristic of the transistor in the common emitter leg).

Hence, the known gain formula for a common-emitter stage with resistive feedback can be applied. However, there is one important point which must be not overlooked:

The current change to be observed in the feedback resistor for common-mode operation is caused by BOTH (equal) input signals. Hence, the corresponding voltage change causing the feedback voltage is TWICE the value belonging to one transistor only. This effect is easily covered if we replace "re" in the formula for the input resistance by the expression "2re". That`s all.

Small-signal common mode gain of this circuit completely depends on imperfections in components and therefore its "theoretical value" is just 0.

Let all 1 kOhm resistors be exactly equal, two differential transistors be exactly the same and the collector current of BJT with pins 3 4 5 be independent on V CE. Then rising both input voltages by the same amount (e.g. 10 mV) causes rising of common emitter voltage (7 10 5) exactly by 10 mV. The current through current source BJT does not change and the output voltages remain the same.

For non ideal case, you have to consider the dependence of BJT collector current on V CE (collector to emitter voltage). This dependence is rather weak for modern BJTs, you can find it in datasheets from I C vs V CE plots.

As for the small-signal differential gain, it is 1 kOhm * SE * h, here SE is an input conductance of BJT at its operation point and h is BJT current gain. These values can also be found or derived from datasheets.

I think the reason you are having difficulty is that you can see that the current mirror approximately maintains a constant common mode current. This means that a signal applied equally to Vin1 and Vin2 will cause no variation in common mode output voltage. So the common mode gain is zero. Of course nothing is perfect and the real life common mode gain will be greater than zero, but still very low. And that is the virtue of the differential input pair.

Not the answer you're looking for? Browse other questions tagged amplifier bjt gain or ask your own question.