Are two (or N) resistors in series more precise than one big resistor?

I'm bad with probabilities, and I'm not sure what exactly tolerance says about resistance and its distribution.

I am aware that in the 'worst case' it will be the same; I'm more interested in what will happen on average. Will the chance of getting a more precise value increase if I use a series of resistors (because deviations will cancel each other out)?

On 'intuitive level' I think that it will, but I have no idea how to do the math with probabilities and find out if I'm actually right.

The worst case won't get any better. The result of your example is still 2 kΩ ±5%.

The probability that the result is closer to the middle gets better with multiple resistors, but only if each resistor is random within its range, which includes that it is independent of the others. This is not the case if they are from the same reel, or possibly even from the same manufacturer within some time window.

The manufacturer's selection process may also make the error non-random. For example, if they make resistors with a wide variance, then pick the ones that fall within 1% and sell them as 1% parts, then sell the remaining ones as 5% parts, the 5% parts will have a double-hump distribution with no values being within 1%.

Because you can't know the error distribution within the worst case error window, and because even if you did, the worst case stays the same, doing what you are suggesting is not useful to electronic design. If you specify 5% resistors, then the design must work correctly with any resistance within the ±5% range. If not, then you need to specify the resistance requirement more tightly.

The answer depends a lot on the distribution of the real resistor values, and what your question actually is.

For the set, I assumed three different distributions:

Here is the result: 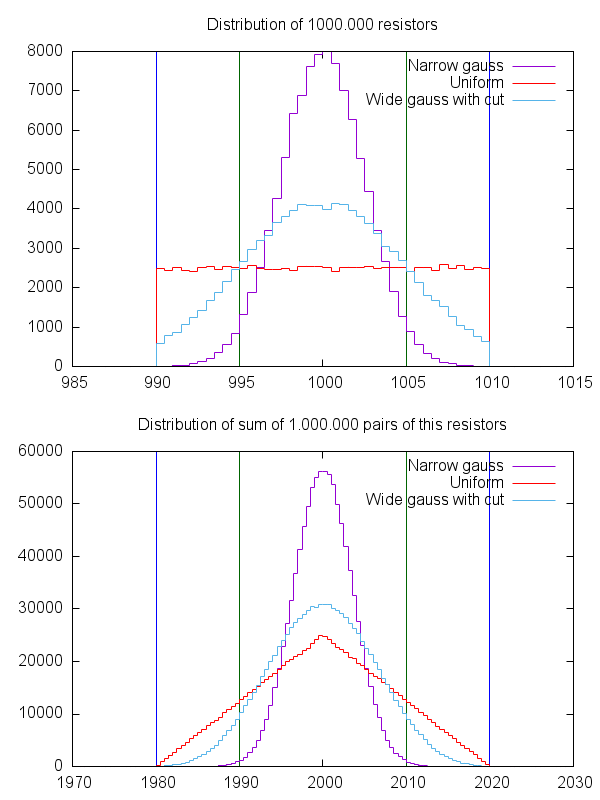 As said in the beginning, it depends on the distribution. In any case, the probability is higher to get a resistance with less difference from the nominal value, but there's still a probability to get a value which is 1% off.

Fun question, Practically, when I was looking at 1% 1/4 W Metal Film R's I found that in a batch, the distribution was far from random. Most of the R's clustered around a value that could be a bit above or a bit below the "target" value. So at least for the R's I looked at it wouldn't make any difference.

There are two important numbers that have to do with your question.

The first is "Worst Case Scenario": In the absolute worst case, one 2k resistor with 5% will be either 2.1k or 1.9k. One resistor of 1k 5% will be 1.05k or 0.95k, added together this comes to either 2.1k or 1.9k. So in the worst case, in series, a bunch of resistors with the same tollerance will always retain their tollerance over the total value and be just as good as one big one.

The other important number is the law of large numbers. If you have 1000 resistors that have an ideal target value and are specified with an absolute maximum error of 5%, of course it's very likely that quite a few of those will be very close to the target value and that the number of resistors with too high a value is about as high as the number with a lower value. The production process for components like resistors falls under a natural statistical process, so it's extremely likely the resulting resistors in a large batch across multiple productions yield what is called a gaussian curve. Such a curve is symetrical around the "desired" value and the manufacturer will try to get that "desired" value to be the value he sells the resistors as, for statistical yield reasons. So you can make an assumption that if you buy 100 resistors, you too get a gaussian distribution. Actually, that may not be the exact case, with resistors a large enough number may have to be 10's of thousands to get a real gaussian distribution. But the assumption is more valid than that all will be off by the worst case in the same direction (all with -5%, or all with +5%)

That's all well and nice, but what does it mean? It means that if you have 10 resistors of 200 Ohms at 5% in series, it's reasonably likely that one will be 201 Ohm, another 199 Ohm, another will be 204 Ohm, yet another will be 191 Ohm, etc etc, and all those "too low" and "too high" values compensate each other and it becomes, suddenly, a big 2k chain with a much better accuracy, through the law of large numbers.

Again, this is only in the specific case of the same value resistors in series. While different values in series are also likely to become more accurate on average, the degree to which this happens or how likely it is, is hard to express correctly without knowing the exact use-case and exact-values.

So, it is, at the least, not at all harmful to place many resistors of same value in series, and usually it gives a much better result. Combine that with the fact that manufacturing a huge amount of boards with just 3 different components is much cheaper than with 30 different components and you often see designs with only 1k and 10k (or maybe 100 Ohm and 100k as well)resistos in cheap, high-volume-production trinkets, where any other value is a combination of the two.

In terms of the maximum/minimum prossible deviation, both cases present the same result.

If you consider the probability of ocurring a 1% deviation to be the same of a 5% deviation, then both cases present the same result.

If you consider the deviation to follow some sort of normal distribution, centered on the resistor design value, still makes no diference. Because even thought the individual deviations will be smaller, the sum will bring them close to the deviations of a bigger resistor. The probability of a 0.5% deviation in a 2kOhm resistor is the same as in a 1kOhm resistor, even though the value of the deviation differs.

Solid carbon resistors have all but ceased to exist on the market as they catch fire easily and change value with voltage. Now days 'carbon' is normally carbon film.

It is a much more stable resistor, but not as stable as metal-film or ultra-stable like the ceramic resistors made by Caddock. Usually 0.025% is available for about $50 each. A laboratory grade 0.01% or better cost about $150-for now.

Most boards that I work with use 1% metal film smd, which now have a very low cost after being on the market for several decades. Stability with temperature and time is often more important than the absolute value of the resistor.

I sometimes put in a notice in the users guide for my test equipment, to turn it on 15 minutes early so the readings for voltage or current are within 0.1% worst case. If I have to I manually pick series or parallel resistors for absolute value, from a batch that is stable enough over time (10 - 20 years) to be useful in production.

I do not use trim-pots unless mandatory, as their drift is about 200 ppm. If I have to use a trim-pot I use series resistors to keep the trim-pot value low as possible.

For 'surge' resistors I usually had to use 14 awg nickel-chrome wire, 30 strands in parallel to handle 10,000 to 150,000 amp surges of about 20 uS duration each. Exact resistive values were not as important as survivability.

In this sense they were much like wirewound resistors on steroids. The accuracy was seldom better than 10% and they drifted with temperature several percent. They ran too hot to touch, but this was normal, it was about surviving a harsh environment.

We used 6awg wire inductors in series with 0.1 ohm ceramic donut resistors rated for 10,000 amp surges for wave-shaping. Connections were made with buss-bars or 500 mcm locomotive cable. The 'emergency dump' is a water tower resistor made with water and copper sulfate, 3 inch's diamater and about a meter in height. It had a resistance of about 500 ohms but was the only resistor that could dump the charge (30,000 volts) without blowing up.

You can split hairs all you want over deviation, but in the end you build with what works. Sometimes tolerance has to take a backseat to other issues.

I have seen deviation in precision resistors, say reels of 5,000, that seem to drift above or below the ideal value (as measured by a Fluke 87 DVM). It makes finding a series / parallel combination with an exact values nearly impossible. I simply use those that have the closest 'fit' to the value needed.

At ultra-precision levels (<0.025%), controlling temperature drift,board leakage and noise becomes a big issue. Now you have to add parts to keep the 'deviation' over time from becoming an issue.

In terms of measuring with precision equipment (0.01% or better), no combination of series or parallel resistors can be more accurate over time than one resistor that already has a deviation so close to zero as to not be an issue.

From my point of view, during practical normal usage, my answer to @Amomum is NO.

The image of tolerance shows how resitors are sorted during the production process. They are distributes in bins containing specified tolerance, so for example in the bin containing +/-10% you won't find any resistor that has better tolerance than >+/-5%, because those parts are contined in the bin of +/-5%. But if you biuld a series chain a large number of resistors, the mean value will be close to specified $$R=nR$$.

Tolerance means the limit over which the value may get diverge from its actual value. 5% 2k resistor means that the resistance will have value between 1900ohm to 2100ohms. Now for two 1k resistors the value of tolerance will add upand becomes 10%. This a simple rule of Errors. You can read more about this in any Instrumentation and Measurement book. So this means that the value two 1k resistor will vary between between 1800ohm to 2200ohms.

Not the answer you're looking for? Browse other questions tagged resistors tolerance or ask your own question.

2
If I have 5% 100k resistors but wanted 1% precision, can I use 4 of them in series parallel to improve on the 5% precision?
10
Reducing the tolerance of resistors manually
1
The effect of combined resistors?
0
using big resistors vs small resistors for voltage divider

2
How does wiring resistors in series and parallel affect their errors?
2
Component has a x% tolerance: What does this mean exactly?
1
How many bins can I code using a resistor on an ADC
2
Is it OK to replace a 750 ohm 5W ceramic resistor with a 750 ohm 10W ceramic resistor
2
Thermal Management for Arcol HS50/HS100 50/100W Wirewound resistors
3
Unsolvable 5-Band contrary color band sequence!
1
Increase headphone impedance using resistors
0
Detecting IR sensor at higher speed
2
What exactly does a resistor's tolerance rating mean?
2
How could one "inverter control" convector heater be more electrically efficient than another?