I am trying to help repair a Comfortron heating and cooling controller for a late 1960's Chevrolet Impala. The Comfortron is an early climate control system that uses a combined vacuum and electrical system to actuate flaps in the ducting and control the fan speed.

Here's the circuit as I've traced it. The Sensors input is connected to +12V through several NTC thermistors, and the Transducer Drive output drives what sounds like a thermo-electric vacuum valve that closes off (reduced vacuum) as the current through it increases; that vacuum signal controls the duct flaps and the fan speed. 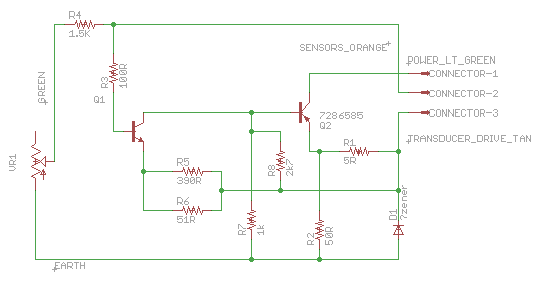 The circuit is not complicated but there are a few mysteries. But I should note that Q2 is defunct so I am can't be sure it is a PNP - I don't see how the circuit would function with an NPN device. But it is in backwards, as the circuit shows. I understand that is done sometimes (eg to get low Vce(sat)) but can't work out why that would help in this case. So that is mystery number 1.

Mystery number 2 is the ID on Q2: 7286585. It is in a TO-3 case and has a Delco/GM brand on it and '6728' which I interpret as the year/week code. I can't find any useful hits on Google for that device ID but I'm not surprised - all the main components on the board have part numbers starting '7286' - two transistors and two resistors. Its as if the numbers were used specifically for this assembly.

Without a part number I will be guessing about a replacement, although judging by Delco's product lineup in the 1960s I would expect it to be a Germanium device.

Anyone care to offer an explanation for the reversed connection, or some interpretation of the part number?

I agree that it is a good chance that it is germanium. There were not a lot of transistor choices in the 60's, so you may try any PNP or NPN germanium in a T03 and see what happens. Not knowing where the I/O ports go to it's a guess as to what it is doing.

I've been down this road before, only my "black box" was potted. If you can figure out the input sensors, and know where the outputs go to, then why not roll your own circuit? If you make it microprocessor controlled, changes are trivial to make. It is more involved, but if you do it right and with today's technology it should be even better than the original.

Not the answer you're looking for? Browse other questions tagged amplifier automotive or ask your own question.