Options for matching 75 to 50Ohms on PCB

I'm collecting information for a project I've got in mind.

I'm not looking for someone to help me do the calculations. I'm not to that point yet.

I'm basically looking for "the voice of experience" that says "matching with technique X way has a good/bad chance of performing as designed. Here are some gotchas to watch out for."

One step of the project involves connecting a satellite TV LNB to a MAX2015 Logarithmic Detector to measure signal strength.

The difficulty is that the LNB output is 75Ohm impedance. The MAX2015 is made for 50Ohms, and even has 50Ohm termination built in.

From what I've been able to find, the output of the LNB stretches from 950MHz to 2.15GHz.

From what I can see there are two usual options for matching (and one maybe not so usual):

The L-Pad is easy enough to build, but involves a fairly high loss (5.6dB according to calculators on the internet.) It is wide band, so that's a plus.

I find a few RF baluns that can cover the needed range. What I can find seems to say I need an RF transformer with a 1:1.25 turns ratio (sqrt(75/50) gives 1.225, 1:2.5 is the closest I can find.) There are also transformers specifically for 50 to 75 Ohm conversions. These all have have a rated insertion loss that is lower than the L-Pad (2.2dB in one example.)

From a suggestion in the comments, it looks like just ignoring the mismatch will get me within 1dB of flat for the needed range. If someone could verify that, then that would surely be the simplest to achieve. The information I found was based on cable performance, so maybe there's more to be considered when using it on a PCB.

As a fourth alternative, I've seen references to using tapered coplanar waveguides for impedance matching. I don't see anything about insertion loss, but then I've not read a lot on the subject. I expect there'll have to be a waveguide involved in the project no matter what I do because there will have to be a couple of centimeters from the RF connector for the circuitry for the LNB power injection. I expect the calculations and manufacturing of a tapered waveguide would be beyond me, though.

Which of the above is going to be the easiest to get correct?

I don't care if the most reliable method involves more loss, as long as it is predictable and pretty much flat over the whole frequency range that the LNB puts out.

It seems to me that the L-Pad would be the most straight forward, and least likely to introduce unpredictable losses. The baluns have lower loss, but it seems they may not be all that flat in their frequency response.

Just ignoring the mismatch looks like it would work well enough, but the only information I found in that direction applies to cables. I don't know if there would be any gotchas when using it on a PCB. Seems like I'd have to use a waveguide on the board for that idea to apply, but then I assume I am going to have to use a waveguide anyway.

I need simple, predictable, and reliable because I don't have any kind of test equipment that will work at the needed frequencies.

The absolute levels that I get out of the MAX2015 aren't the main goal. It would be nice to say "input level is now exactly -39dBm" but it doesn't matter if it is a few dB off. The ultimate goal is measuring differences in RF levels in different conditions - the differences need to be correct even if the absolute levels are not. The MAX2015 can give me that, I just need to be sure I'm not feeding it a bad signal.

I'm using the Max2015 because I have one. There's probably other chips that'd do the job as well and be cheaper. I bought it because I thought I needed the dynamic range. Turns out I don't, but I only figured that out after I'd built a (really rough) test circuit with the Max2015.

Additional info in response to comments:

Thank you for clarification!

So you need PCB solution. The simplest solution (and still very good one!) is that suggested by @mkeith: just load 75 Ohms cable to serial connection of 25 Ohms resistor and the input of MAX2015. This design has attenuation -3.5 dB.

Yet more perfect solution is to use two resistors: 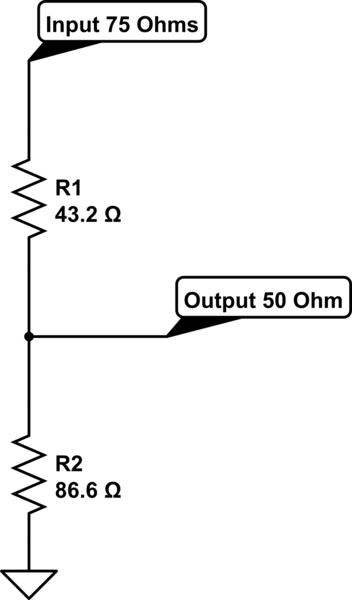 This design makes sure that any reflections from MAX2015 input do not disturb your results. Attenuation -7.5 dB. Resistors are selected according to E96 (1%). You can use 82 Ohms / 43 Ohms pair. Make sure resistors are suitable for high frequency. Preferably use Thin Film 0402 resistors.

PCB traces must be very short. Ground plane is the must. Impedance matching for PCB traces is not an issue until total trace length between 75 Ohms input connector and MAX2015 input is below 5-7 mm.

You have to consider cable attenuation into account to compare signals at different frequencies.