I write a VHDL code for an adder tree, with a parametrized number of vector. It's only for Learning purpose, so I didn't implement the carry between the block, I simply created a larger bus so I haven't theme.

I created the internal signal adders_intern, and I created the shown algorithm. To explain it, I attach the image with the adder tree (sorry for the quality). 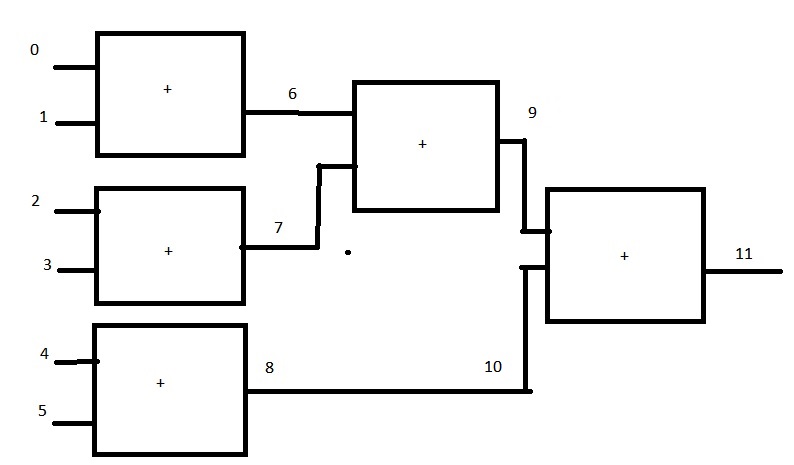 This behavior is generalized for a number of signals equal to M. I check many times the algorithm, it seems correct, but the RTL add only the first two signals, and I don't know why. Here is the code (only the process):

I'm wrong something in the algorithm, or VHDL don't permit the description of this type of sctructure trough a process?

I understand that it can't be made by a process, because process describe the behavior, not how the interconnections should be wired. But now I was wondering if it is possible to do it with the "generate" statements. I see some paper on the internet that use "generate", with nested for statements, to do the inverse of the tree that I want to make (from one element to multiple elements, balanced tree. I want to make: from multiple elements to one element). So I tried to do it with generate and some variable, used in the same way of the code I used in the process. But of course I got errors because I can't use variables outside the processes. I tried also to find out a clever way to manipulate the index and achieve the gol, but nothing seems to work.

A design entity may be described in terms of a hierarchy of blocks, each of which represents a portion of the whole design. The top-level block in such a hierarchy is the design entity itself; such a block is an external block that resides in a library and may be used as a component of other designs. Nested blocks in the hierarchy are internal blocks, defined by block statements (see 11.2).

A block statement defines an internal block representing a portion of a design. Blocks may be hierarchically nested to support design decomposition.

(And design decomposition means breaking down the design into smaller pieces here).

A process statement defines an independent sequential process representing the behavior of some portion of the design.

A process statement conveys behavior in sequential statements, which won't likely match what's synthesized. It's a behavioral description not structural.

14.2 Elaboration of a design hierarchy, para 5:

An elaborated design model is used as the basis for both simulation and synthesis - the latter not described in the VHDL standard.

So the later conjecture in your question is more accurate, that a VHDL process doesn't convey structure (hierarchy). A process statement describing behavior is subject to logic reduction, and primitive mapping but imposes no hierarchy, which requires ports (signals).

And for practical purposes you can infer post synthesis structure in a process through the use of sequential logic (latches, registers), while combinational logic (processes without a clock edge or wait statement) only have two categories of defined structures - asynchronous ROMs and RAMs.

This clause does not limit the optimizations that can be performed on a VHDL model. The scope of optimizations that may be performed by a synthesis tool depends on the tool itself. The hardware modeling styles specified in this clause do not take into account any optimizations or transformations. A specific tool may perform optimizations; this may result in removal of redundant or unused logic from the final netlist. This shall NOT be taken as a violation of this standard provided the synthesized netlist has the same functionality as the input model, as characterized in Clause 5.

A combinational logic process has few hints useful in describing structure and the hardware actually produced isn't otherwise under your control.

There may also synthesis target specific inferences that can be made based on the use of statements (e.g. procedure calls), operators, expressions and numbers of bits (array length). The ability to do that is beyond the scope of VHDL language and the now withdrawn RTL Synthesis standard. The ability to convey structure in this manner is inherently non portable.

4
Wrong outputs in VHDL entity
5
VHDL shift operators?
2
std_logic_vector to unsigned conversion throwing incompatible error
4
VHDL logical operation on integer
3
Does a package exist to carry out intense string manipulation in VHDL?
0
How this for loop could be translated efficiently in vhdl using for generate statements?
0
VHDL Code for 4x4 Mult: SYNTAX OK BUT ERROR:HDLCompiler:1029
0
Handling of temporary signals in concurrent environment