I purchased 10PCS Socket Adapter plate Board For NRF24L01+ Wireless Transceive​ module and would like to know how much current/power it will draw as I want to run a project on batteries.

A close-up of the unit is below. 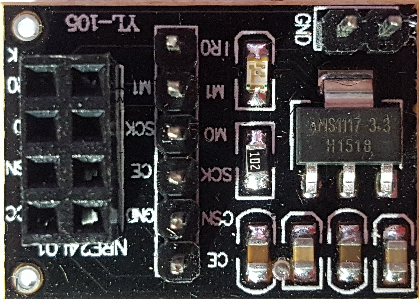 Using a multimeter, I measured the following current from 7 of these units (powered from 5.2V source):

I scratched the power LED off another unit (LED is between GND pin and IRQ pin), and measured 3.28mA.

My question is, is the current I can see (minus the LED current) the quiescent current of the 3.3V voltage regulator? Also, there is no nRF module plugged in to the socket; does the regulator need a load before I can measure its power usage?

I think this is the regulator - Advanced Monolithic Systems AMS1117 1A LOW DROPOUT VOLTAGE REGULATOR, and there's a row in the datasheet with these values:

If you take a close look at the regulator datasheet

You will note that the minimum load current is specified for the adjustable version only; the true quiescent current is the adjust pin current for this device:

This is listed for the adjustable version only (so the designer knows how much current will need to be drawn from the regulator in the case the load may not take the listed minimum).

The conclusion here is that the fixed version (which is what is on your board, AMS1117-3.3) has been provided with a minimum load internally. That load is very likely the current in the voltage set resistors and probably some other physical load provided internally to the devie package.

The adjustable versions list the quiescent current as the minimum load current, but for guaranteed regulation, there may need to be another 5mA of load.

The datasheet shows the typical quiescent current at 5mA, but note 5 states:

Note 5: Minimum load current is defined as the minimum output current required to maintain regulation. When 1.5V \$\le\$ (VIN - VOUT) \$\le\$ 12V the device is guaranteed to regulate if the output current is greater than 10mA even though this note only applies to the adjustable version (the devices will all be identical except for the adjustment resistors and loading).

Not the answer you're looking for? Browse other questions tagged voltage current voltage-regulator low-power quiescent or ask your own question.