I'm working on transmitting audio through light using amplitude modulation of an LED, received by a solar panel connected directly to an active speaker. Something like this:

I only have rudimentary understanding of analog electronics (I work mostly with software), so I'm wondering which transformer that should be used. The schematics I find online are all for a 9v or 3v circuit, but since I need a strong light, my LED is 7W 12V. Is an 8 ohm to 1k ohm the correct one? What's the equations for audio transformers and voltage? I only seem to find voltage converter circuits and equations when searching for this online.

The circuit contains parts I already own (LED and solar cell), but I'm happy to order other types if need be.

EDIT: Here are a couple of projects using this technique:
http://www.instructables.com/id/HOW-TO-Send-AudioYour-Voice-Over-a-Beam-of-Light/?ALLSTEPS (photoresitor instead of solar cell)
http://asd.gsfc.nasa.gov/blueshift/index.php/2013/01/22/try-it-at-home-turning-sound-into-light-2/ (No transformer) 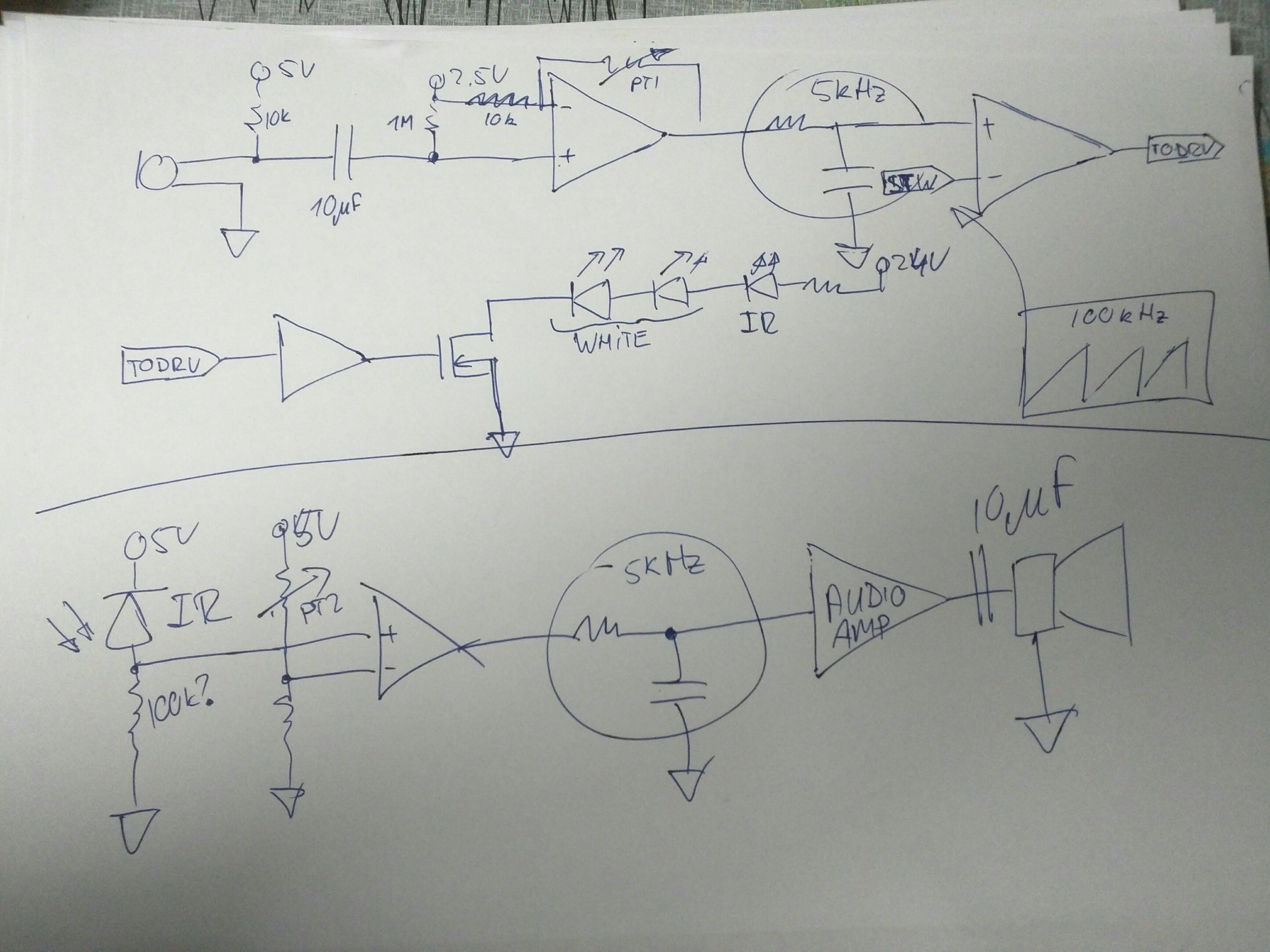 So this is the scheme. I omited several circuits because i'm lazy and because i want to concentrate on the system design.

Then you have a most basic low path filter. 5kHz shoud be enough for your application. Then a comparator.

The negative input should be fed with sawtooth wave of 100kHz. This frequency on on hand is low enough to work with all common components, and is high enough to be order of magnitude higher than your bandwidth (5kHz, remember?).

Next it goes to a gate driver (for some cases you may not even need it) and a MOSFET that turns on the LEDs.

It's pulse width modulation of light. The time of each pulse is proportional to momentary value read from microphone. Why do you need it? It will almost not depend on smoke. Because the detector will only have to detect if the light is on or off, not the power of light.

Pay attention! I drew two white LEDs and one IR. Combination may be different, and for 24V you will have to put more white LEDs (probably 4). But IR is the one that will transmit the data, because it has narrow spectrum and may be nicely matched with IR photodiode.

Now the receiver. A photodiode will read a signal. You will have to set a threshold such that a signal below will be counted dark and above- light.

Then a buffer/comparator (output is 1 if LEDs are on) and a 5kHz filter. If everything worked out well, now you have a recovered audio signal. Now you use an audio amplifier and your speaker.

Well, there is such thing "audio transformers". Here, take a look.

Your audio input must be amplified, it will not provide power enough for anything. And LED or laser will not just create PWM.

I would say, the whole idea is a little strange. Although i am not audio design engineer per say, i still wonder, what is it exactly you are trying to achieve?

If you want isolated audio channel with pulse width modulated light, no problem. But why transformer? The receiver must be connected to a comparator, then to a gate driver and a MOSFET. All together would look much like a class D amplifier with optically isolated input.

If you want to transfer power by light, i would suggest separating power channel from data channel.

What is your 8 Ohm audio source? 8Ohm is usually a speaker, not a microphone. Do you whish to connect it to the output of a loudspeaker amplifier?

This circuit might work on simulation, but in reality it's hopeless. The constant current through the transformer winding will saturate the transformer core. The 8Ohm source won't be able to drive the any reasonable power into the circuit. The "solar cell" is highly unsuitable.

That you need is an amplifier (a simple operational amplifier circuit will do). You add a constant voltage offset to your audio signal and after you put it to a V-I converter (also an opamp circuit with feedback) to drive the led. That's enough to drive your led.

To receive the signal you need a photodiode with an amplifier (opacity amp as transimpedance amplifier).

First, I need to say that you need to learn the basics of analog electronics before you start thinking about such circuits. Second, even if you make such a circuit, the quality will be very poor. A much better solution would be to use digital transmission with forward error correction coding.

EXECUTIVE SUMMARY: If you want to reproduce that circuit for a 7W power, you will need at least 3.5W of audio, and a transformer with a secondary side rather lower than 1000 ohms (1K) A rough guess would be that you may need something more like 100 up to maybe 300 ohms. Trying to put 7W (LED power) through the secondary side of a small audio transformer can quite possibly burn it out like a fuse because it was never designed to take that kind of current.

This is an extraordinarily inefficient and costly way to modulate power. In addition to the high audio power to drive the transformer, you need a transformer with the proper primary and secondary winding impedance to efficiently couple the modulation signal, and sufficient wire gauge to modulate the secondary current at minimum DC-loss through the secondary winding. You MAY be able to find a commercial transformer with appropriate windings for your project, but you may spend months looking for it.

Here in the 21st century, there are MUCH more efficient and less expensive ways of modulating power, typically using switch-mode techniques. Even mega-power broadcast transmitters use this kind of high-frequency switching (like Pulse-Width Modulation PWM) for modern solid-state transmitters. The PWM method is also the most common method of creating analog outputs from microcontrollers like Arduino, et.al.

Not the answer you're looking for? Browse other questions tagged audio transformer light or ask your own question.

7
How to trigger a transistor from iphone's audio output jack?
5
Identify a light emitting component
2
“Hot-knife”/Thermal cutter power supply design
1
Op-Amp decreasing amplitude of audio signal
0
How to power a homemade lightbulb safely
1
What is the use of R5, C4, C2, R6, R5, D1 in the below amplitude modulation circuit?
1
Parallel audio is twitching my whole circuit
3
Transformer vs capacitive vs both coupling to speaker