Does current flow through the potentiometers of buck and boost converters?

I'm working on a project where I'm replacing the trimpots on a buck converter and a boost converter with proper potentiometers. The new potentiometers will be wired to the converters instead of soldered directly on, so this poses a problem: What wire gauge should I use?

Let's say my loads will be maximally drawing 10A. Does that mean I need 16-14AWG wire to attach the potentiomters? I don't think so but I don't totally understand these things. My current understanding is that the potentiometer acts as a voltage divider and it is the center pin which tells the chip how to limit voltage or current by being at a certain voltage.

The answer may be that it depends on the converter but I think there is a general pattern here. To give an example though, I'll be working on this Chinese converter (Google translate) Update: This post is the most information I can find on it.

As I understand it, it's based on the UC3842A SMPS controller driving at least one power MOSFET (I also see a big N-channel and then the smaller BU806 NPN.) I don't know if that's enough information to answer my question though. It seems like, if it works the way I think it does, it's pins 2 and 3 on the UC3842A which read the potentiometers.

Another example is the LM2596-based boards. I suspect they work in a similar way (and are a bit easier to understand.) There's one more board/chip that I'm interested in but I don't have any information on it yet since it's not in my possession and there's very little details online. If it's okay, I'll leave the ebay link here.

Yes the potentiometers act as a variable voltage divider, so you can change the output voltage of the converter whenever you like. This voltage divider is connected to the Feedback (usually this pin is named as "Feedback") pin of converter IC, providing feedback for the regulation loop. 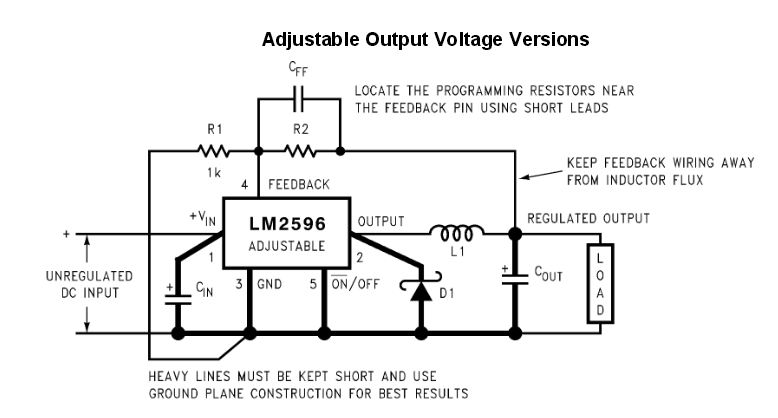 The datasheet usually contains information about this pin's bias current. In case of the LM2596, it is typically 10nA.

The feedback resistors are also recommended in the \$ k\Omega \$ range, reducing current flow.

7
Why does this buck converter output such low current?
6
How step-down voltage regulators behave when their input drops below their output voltage?
5
Strange oscillation in buck converter (AP3431)
3
Buck/Boost Converters-- What's the 'cost'?
4
What's an efficient way to get below the standard 1.25V on buck converters?
4
4 switch Buck-Boost, boost not reaching designed current
6
Behavior of Boost and Buck Converters
0
Why does duty cycle seem relevant when calculating inductor current in boost converter circuit?