How to limit current to LEDs

I have understood that this is a bad way to do it: Since some LED can draw more current than others.

So lets say I would power some high powered LEDs, like say 10 x 3W LED with a DC forward voltage on 600mA @ 3.2V. This is just an example so I'm not going to look up a specific LED, this is only to learning. No, that's the right way to do it. Each LED having it's own ballast/series current limiting resistor, sized in Ohms and Wattage to fit the desired forward current of the LED and the Voltage source.

The "wrong" way to do it would be with only 1 resistor for multiple LEDs in parallel.

This is impossible. Each LED has its own voltage-current characteristic, which varies from device-to-device and according to the temperature of the device and its usage history (aging).

To get close to equal brightness from each LED you want to run the LEDs with equal currents, allowing each LED to have whatever voltage it takes to reach the current you choose.

(To get as close as possible to equal brightness you'd want a calibrated photodetector sensing the output from each LED and use feedback to adjust the current of each LED individually, but that's not generally worth the expense)

The most efficient way to achieve equal-current drive is to put the LEDs in series and use a switching regulator to drive them to the current you choose. For 30 W worth of LEDs, this method would be common in commercial applications.

The circuit you posted is a very common way to come close to equal-current drive with lower cost and less complexity, but also lower efficiency and with more variance in current between devices (due to their different I-V characteristics).

Consider what you already know about electricity. Imagine you need to charge five smart-phones.

Of if we're designing a regulating circuit for five smart-phones: 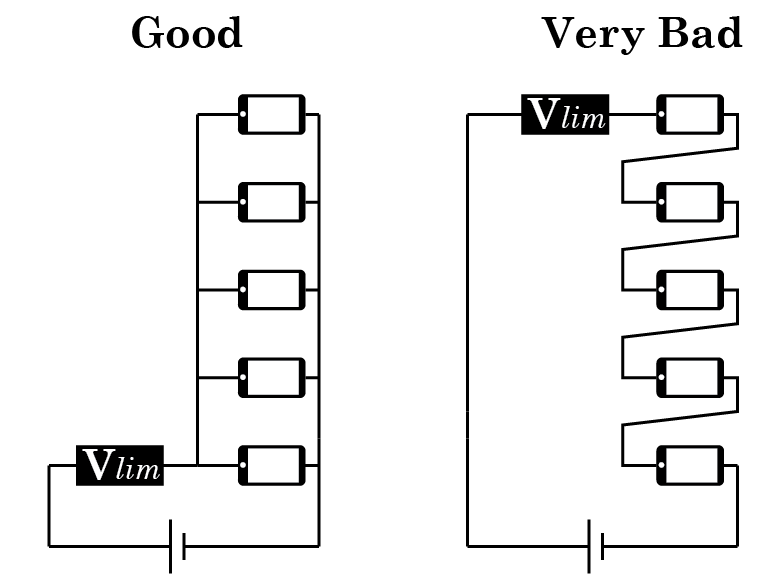 No need for an explanation here. They are constant-voltage devices which we power with a constant-voltage power supply: voltage remains constant in a parallel connection. (a series connection would be laughably, stupidly, "not even wrong".) Not that we ever really think about that; this is just normal.

And we want to think LED emitters are like that too. But they're not.

Consider a fluorescent tube which runs at ~120V at ~300ma. Like any arc-discharge light, once the arc strikes, its resistance is nearly zero. The bulb wants to be a dead-short, which is why you need a ballast to limit current. The ballast is a constant-current supply, which is not something we're used to.

LED emitters are very non-linear - a tiny change in voltage, temperature or age causes a huge change in current. To drive them constant-voltage, you'd need to choose such a conservative voltage that you wouldn't get much performance out of the LED. A well-chosen resistor is better, but you still need a big safety margin which holds you back from peak performance. On the other hand, the LED is rated by the factory to be driven at a specific current.

Constant-current turns our way-of-thinking upside down. When regulating current instead of voltage, you want series instead of parallel.

Or if we're designing a regulating circuit for five LEDs: 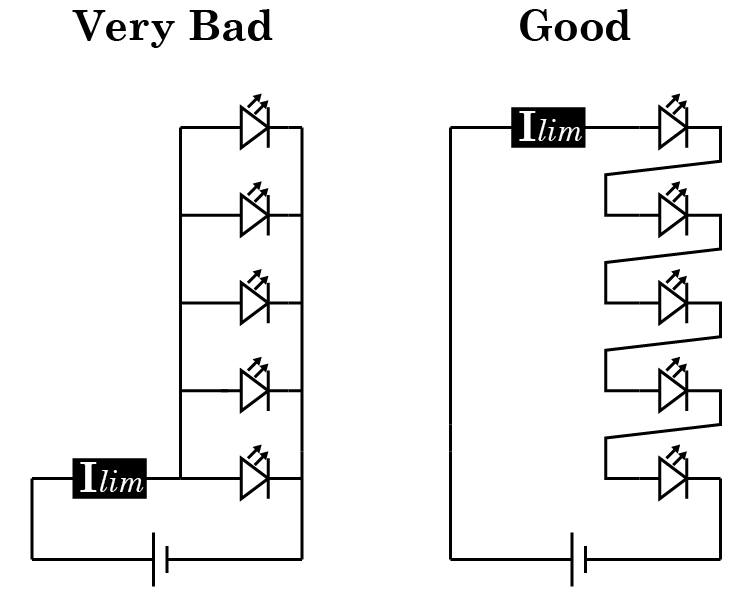 They are constant-current devices which we power with a constant-current power supply: current remains constant in a series connection. (a parallel connection would be laughably, stupidly, "not even wrong"... well, not quite as wrong as the earlier example, but you'd really be praying to the manufacturing-tolerance gods.)

If you want to dim the LED, you can change the current. The voltage won't change much, so reducing the current by half reduces the brightness by about half. Since they're in series, they all dim together, and equally. And since we certainly could change the current, it might be more apt to call this arrangement "current mode", since we care about current, and not about voltage.

As a practical thing, constant-current regulator modules are readily available. Lot of people make them. And 350ma is a commonly used current. We care about voltage a little; a driver intended for ~3.6V LEDs may be a different product than one intended for a ~36V string of 10 in series.

Or if you need really simple, stupid current regulation, indeed, a resistor will suffice. In fact, you only need one resistor. But as discussed, you won't get peak performance out of the LEDs that way.

If multiple LEDs stack to more voltage than you have readily available, one option is to break them up into series-parallel strings, with current regulation on each string. That's what happens in 12 volt "LED strips". The other is to use a boost converter to pump your voltage. Since constant-current power supplies usually incorporate chokes and choppers, the "boost" and "current limiting" features could be combined - the Joule Thief is a very simple example of that.

The way you show is the right way, short of a much more complex circuit.

For example, a boost converter with all the LEDs in series, as is often used for LED backlights. That can be very efficient, but it requires a special chip, that is probably difficult to solder, and is fussy about PCB layout because it operates at high frequencies and high currents.

But if you are just going to use resistors and your battery voltage is well above your LED Vf it will work fine. Too far above the LED Vf and it wastes energy, and at some point it would make sense to make multiple series strings, each with its own resistor, but the way you show is still going to have the more consistent current.

You can't have same voltage and current for parallel LEDs because the forward voltage of the LEDs is not the same. Your example circuit is not a good one if you want constant current (=brightness) for each LED (or series of LEDs). This may or may not be an issue depending on how closely controlled the light output needs to be and how much power you're willing to dissipate in the resistor. If you set power supply voltage close to the LED maximum forward voltage, you get very large variance on I=U/R equation.

There are a few different ways of going about implementing constant current for parallel LEDs. Current mirror is a popular one but has limited fault tolerance as you have one master LED which will take out all the others if it goes down. Another solution is to use a mosfet (or a BJT) as a variable resistor. This is fault tolerant but does not allow you to dim the LEDs easily which current mirror will do.

If you have a variable power supply, you may want to consider using a circuit which uses a transistor current sense circuit for each LED to limit the current to the most "sensitive" LED current. The problem with the latter one is that usually the feedback signal will INCREASE output voltage if you pull it down so you'd have to invert the open collector circuit. Plus obviously you'll have again non-optimal matching between currents.

Check this page for some hobbyist examples: http://www.instructables.com/id/Circuits-for-using-High-Power-LED-s/

Not the answer you're looking for? Browse other questions tagged led current-limiting constant-current or ask your own question.

1
How to choose what a power supply to drive 2 x 10watt RGB LEDS?
0
Forward current for assorted LEDs
0
If a meanwell ldh-45 led driver provides a range of voltage outputs at a constant current, how is my desired voltage selected?
1
LEDs in parallel WITHOUT Resistor and Constant Current
0
Effects of current/voltage limiting of LEDs
8
can leds take varying voltage > listed voltage, with constant current?
1
Efficiently limit current to led without power loss
1
Current source with multiple "taps" for driving different LEDs
2
Does an LED connected to a C.C. Power Supply require a series resistor?
1
Is it OK/Safe to use a parallel resistor to divide current driving an LED chip?