I was watching my oscilloscope as I was holding a very short wire attached to the probe. It was showing about 0 voltage (small spikes) until I touched the metal. When I touched the metal, the scope immediately showed a 60.0Hz (peroid of 16.66ms), approximately sinusoidal (very noisy) waveform. Considering that the power in my area is a 60Hz AC, I think it most likely that it was picking up coupling from the power lines. This sine wave was immediately replaced with a flat, -200mV line when I touched an electrical ground, but resumed when I let go.

Was I acting as an antenna for electrical noise from the mains line? I was wearing rubber shoes on a concrete floor and touching nothing but the probe.

Antennas are usually thought of as converting a radio wave into an electrical signal. I say this because you wouldn't name the plates of a capacitor as antennas. Capacitive coupling (not EM antenna reception) is the phenomena you witnessed when you touched the o-scope probe.

You might have heard about fluorescent lamps lighting up when pointed at overhead wires: - 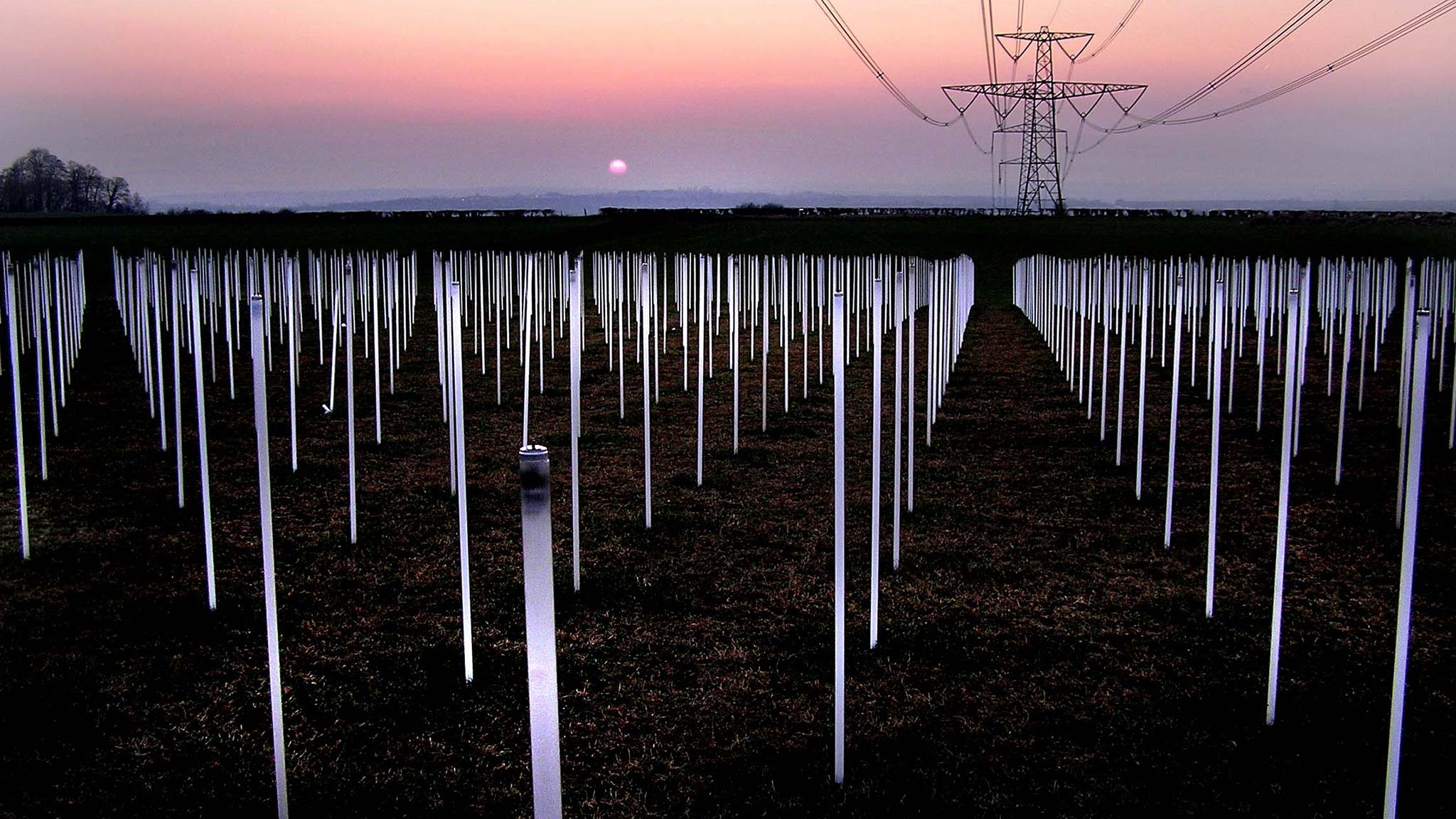 The alternating electric field produced by the overhead lines cause a small current to flow through the lamps and light them - this is the same principle involved when touching the scope probe. Picture taken from here. If there were an earthed shield above the tops of the tubes and below the overhead wires, those lamps would not illuminate.

Your body has a large surface area and this massively increased the capacitance between probe tip and the local conductors supplying over one hundred volts RMS around your building.

When you also touched earth, this galvanic electrical connection would dominate the capacitive "connection" to your AC power wiring and the "picked up" signal reduced significantly.

It's all about potential dividers formed by capacitors and resistors and not really about antennas (RF electromagnetic wave devices).

And the presence of the human body can reduce signals reaching (say) a sensor plate: -

Here, the hand (and its capacitance to ground) diverts the electric field from hitting the "receive" plate and less current flows into that plate.

Your body can act as an antenna, but definitely not in this case. For a 60Hz signal, the value of λ/2 is 2500 km, so your body has not nearly the right size to act as one. You have picked the mains wave via the capacitance between your body and the electric wires.

Things change in VHF/UHF range, where your body can actually convert an electromagnetic wave to a signal. In analog TV era, this phenomenon could be easily seen when tuning the "rabbit ears" dipole antenna: the reception quality would sometimes improve while you're holding the antenna, and revert back when you let go.

Yes, definitely. Your body is partially conductive. It's enough for your skin to act as an 'antenna' and inductively couple your oscilloscope to the 60 Hz power line. Due to your body actually being a bad conductor, the induced energy does not produce much power. It's possible to see the voltages relative to power ground on your scope because it has a high impedance input. When you touch a conductor, you're applying a lower impedance 'load' and you're completing the circuit, dropping the voltage to that of the electrical ground.

Not the answer you're looking for? Browse other questions tagged antenna coupling or ask your own question.

2
Why does the human skin steal field lines when it's very non-conductive in dry state?
1
Can someone explain how I turned on a circuit by touching it?

8
Helical antennas and orientation
1
Two different length antennas can cause problems?
1
Are all antennas traveling wave antennas?
0
How can I combine two antennas that carry different frequencies?
3
Can 900MHz and 2.45GHz Antennas be differentiated by shape?
0
Difference between directional and beamforming antennas
16
Can antennas be viewed as light sources?
1
Combination of different antennas