I'm designing a 68000-based VGM player, and I'd like it to output some sort of 'visualization' of the currently playing song to a TV through either RGB or Composite (video encoder probably for that.) I'm thinking of using this system to display video (and running the sync and RGB through a composite encoder instead of VGA) and then just taking the RAM onto my main CPU as needed, but that just seems horrid and from my calculations won't give me much more than 15-20 FPS.

So, I guess the question is this - is there an easy way I can get my 68k to somehow output RGB/composite video to a television? My requirements are relatively low as anything with the resolution of around 240x240 will work, but it needs to get me around 30FPS with my main CPU taking a considerable share of the time writing to the VRAM.

Stop press: Added last. I just had a good look at the AVR hardware based VGA Generator that you posted. They start with a simple version and work up over 16 pages. If you used the 68000 as the processor it would take lot of resource. But, if you used an AVR dedicated to he task and added a simple serial link from the 68000 then this solution is potentially very good. 3 ICs to give flicker free update display on a VGA moniotr is respectable.

You could follow the light side and try some of the ideas at the end under 'light side", BUT I suspect that finding some nice modern module with VGA capability and talking to it with serial coms of some sort will be MUCH less painful.

EXAMPLE ONLY - there will be many more such: 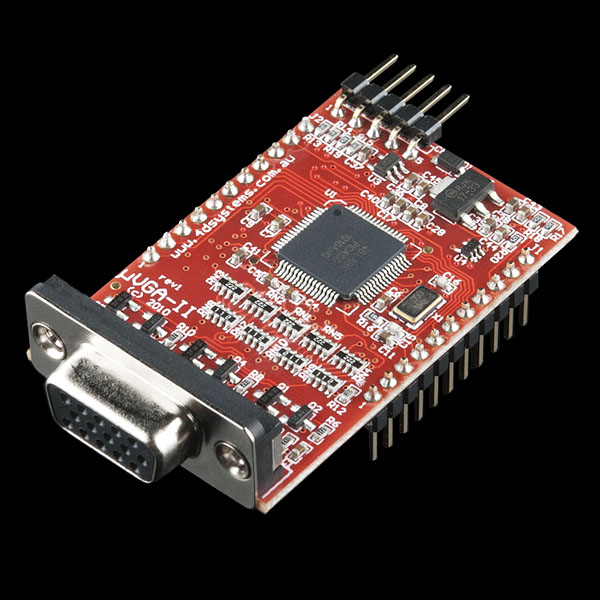 LIGHT SIDE (some will disagree)

In the Ye Olde good old days there was the fantastic 6845 and the not so fantastic but colour capable 6847. Verily much water has flowen under the bridge since those days, but a man using a 68000 may find them still of much use. There is no doubt that better and easier has since been created, and some others may as yet tell thereof, but one or other of the above pair between them will do what you want.

From memory the 6847 was more set in its ways nad maneed som glue around i to compell it to do as you wish, but such has been done before now.

Lo & behold, and with winder I find that my memory served well enough despite the passage of years, and

Although intended for designs based on the Motorola 6800 CPU and given a related part number, it was more commonly used alongside various other processors.

Wikipedia on Video Display Controller including

The Parallax Propeller CPU can generate either VGA or NTSC/PAL composite video directly without any additional components except some external resistors.

The following circuit (adapted from one of their demo boards) shows all of the circuitry required for either VGA or composite video: 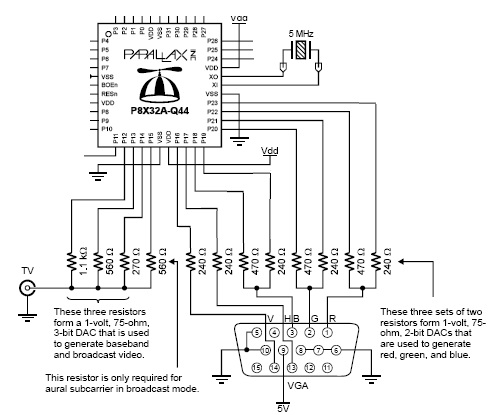 The chip comes in either a 40-pin DIP or 44-pin QFN/QFP and costs $8 in single quantities.

Here are three demos of the video output:

5
How to make a VGA monitor display a white screen at all time?