This is my circuit. An MCU gpio pin should control the power of another IC. Because the component requires more current than the gpio pin can drive, an N-Channel MOSFET is used. This is IC has no ENABLE/SHUTDOWN/RESET pin. VCC may be different from MCU VCC. However in this configuration a virtual ground for that component is created because of the RDS_ON resistance of the MOSFET that causes a voltage drop.

A certain number of question arises: 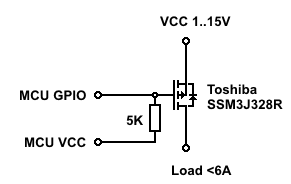 The way that you propose is not a good way to switch the power to the load. You should instead switch the VCC power side and keep all the GNDs common between the MCU and the power switched device.

The technique used to achieve this would be to use a P-Channel MOSFET for the power switch and then an additional small signal transistor to provide level translation from the MCU GPIO voltage levels to the Gate drive for the P-Channel MOSFET.

Here is a picture of such a design. I show using an NPN BJT for the level translator but a small signal N-FET could be used as well as long as the gate level threshold is compatible with the MCU GPIO levels. 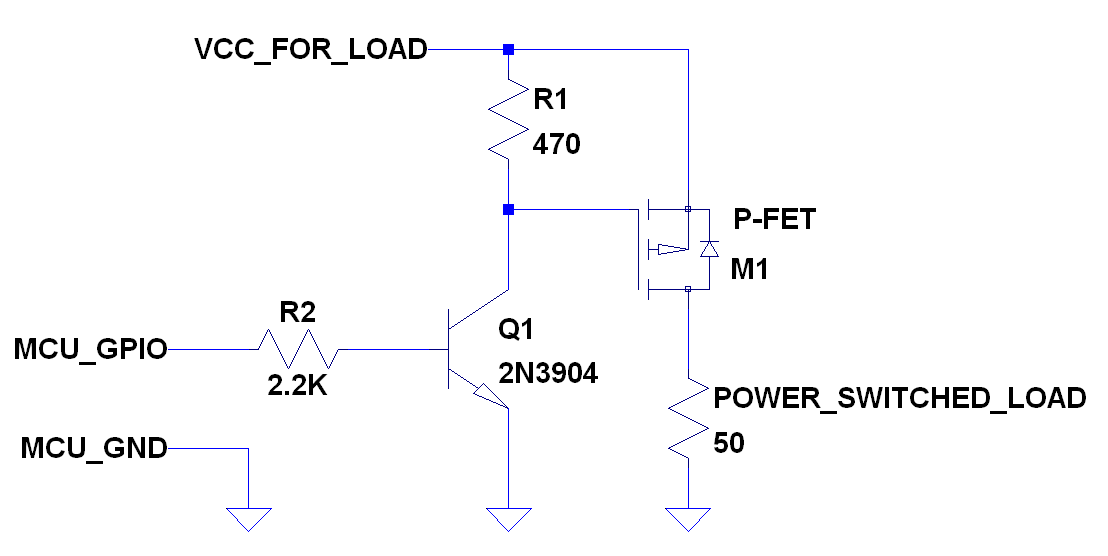 Note that there are some situations where you could be switching power to a load device and it would be desirable to keep the MCU GND separate from the switched load. This may be the case if the load generates a lot of noise, huge current surges or is a dangerous voltage such as AC mains. In this instance the load switching would be done through a relay or an opto-isolator.

Not the answer you're looking for? Browse other questions tagged power mosfet switches gpio reset or ask your own question.

0
General Questions about PIC24 MCU Input and Output Pin Impedance, Voltage, and Current
3
NXP LPC GPIO Glitches on every power up. How to solve?
0
Are most GPIOs on common MCU's merely 'sourcing' or also 'blocking'?
4
Is it safe to drive P-channel MOSFET gate directly from an MCU pin and 12V pull-up?
0
TFT backlight control via GPIO
4
Maintain state of GPIO pin across reboot
0
GPIO state of MCU (AVR) with no supply voltage
0
Power dissipation of a current limiting resistor (connected to an input pin of uC.)