Possible wrong use of TVS diodes?

I've been facing a weird situation and unable to find the reason behind so far, therefore I frustratedly turned up for help.

I have a system comprised of 2 separated PCBs (A control box and an on-board controller), connected through a thick 10-pin cable. The system is using a 24V supply (65W) for sensors and motor, 5V for sensors and 3.3V for digital I/Os. It has been working fine until I updated both PCBs with TVS diodes for ESD protection. Things turned bad and I identified the culprit being the TVS diodes, only after burning up dozens of microprocessor chips.

The symptoms includes power-switch self-shorting (the switch contact piece will not re-bounce back when unpressed), motor driver dying (which is supplied with 24V for motor, 3.3V for signal, and GND), dropped voltage on one of the output channel of optocoupler (which display a 3.3V at first, but quickly drops down to around 1V. What came to mind is that the channel also has the shortest trace), and mainly - the micro-controller of the control box got heat up in seconds and permanently stayed in this status. My assumption is either 24V or 5V somehow got into the 3.3V trace and wreak havoc in the system. Or there could haven been a reverse current. However, during the whole process the 3A on-board fuse didn't blow.

The TSV diode layout is shown below: 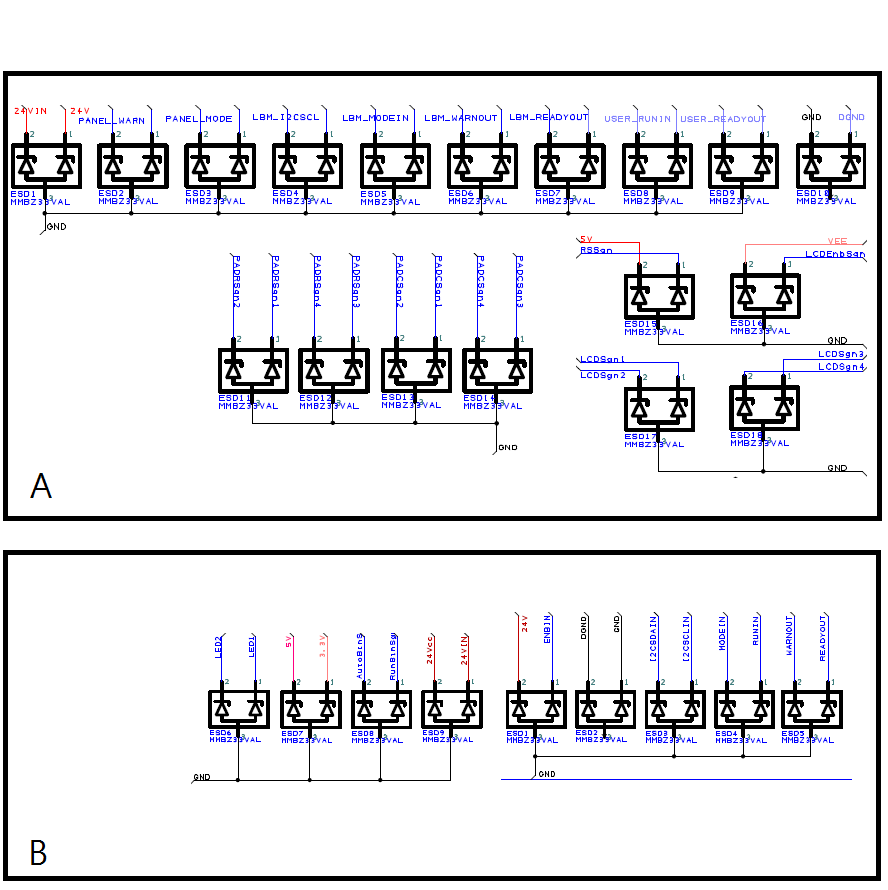 The TSV diode I chose is MMBZ33VAL, and it has the Reverse Standoff Voltage at 26V. I know it might be inappropriate to use it on 3.3V and 5V application, but I believe it will only decrease the protection capability instead of compromising the system. The system will function normally (well, only as far as I can tell) If I removed all the TSV diodes on the new version boards. So must have made a mistake somewhere but I cannot identify it myself, so it would be appreciated if someone can point it out and explain why.

The idea is correct.

But check the followings:

I found it is a good idea to have a multi-level of protection, and use the TVS for ESD protection (instead of very narrow overvoltage protection). The data sheet says its maximum breakdown voltage is 26V, so actually it can start conducting at 24V or at 23V as well.

So it is a good idea to: