I'm new here and I'm re-new in electronic hence why I'm seeking for some help. Last time I touched a breadboard with a transistor was 10 years ago.

So, here's my problem and the problem to the solution to try to fix the first one. I have purchased a PIR sensor from ebay. On a breadboard, I connected the sensor to a single LED and I saw that the voltage was low (1.75V circa). Note: I'm powering the circuit with a USB cable, so the input is about 5V.

Now, I thought that the PIR was just giving me that kind of output and I thought of a simple solution: I connected the PIR's output to the base of a 2N3906 transistor. The collector is directly connected to the source (5V) and between the emitter and the ground I have the load which it the LED. Nothing, same issue. The output's pretty low as before.

Any suggestion? Is it because, perhaps, the PIR is drawing too much to itself that I haven't got much left for the LED (through the transistor)? 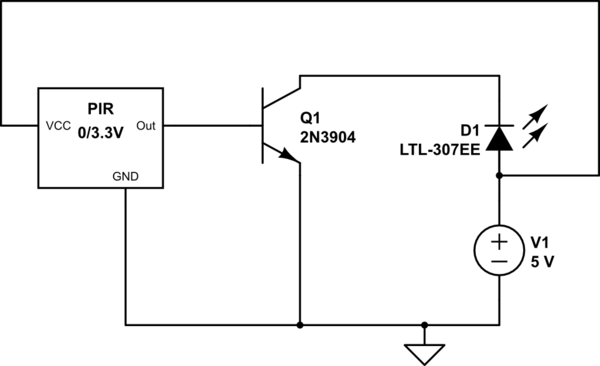 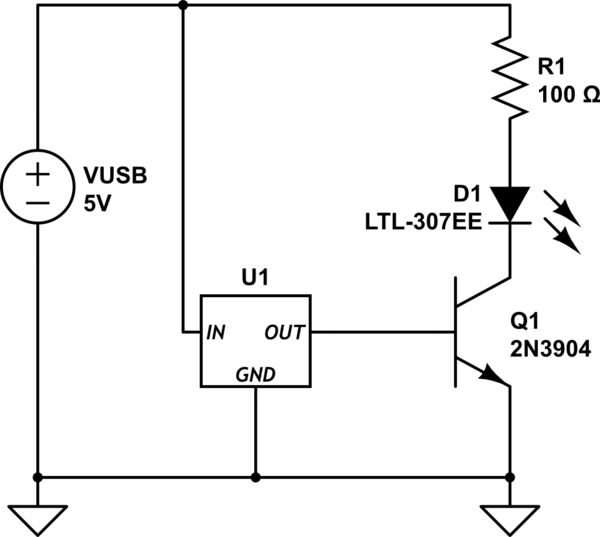 I got it. Whilst I was looking around for the datasheet of the PIR, I wanted to look at the one of the transistor one more. I noticed that one of the drawings I found online gave me the C and E pins all the way around!! Once I simply rotated the transistor of 180 degrees (so what was connected to the collector is now connected to E and vice-versa), it started working as expected.

Thanks all for the answers. I'll now have to fight with the actual PIR with the sensitivity etc.

Not the answer you're looking for? Browse other questions tagged transistors usb 5v low-voltage pir or ask your own question.