My question is long, rambling and weirdly specific. I hope I'm not violating like 50 stackexchange rules, but I'm completely lost. Long-time lurker, first time asker and pretty new to circuits in general.

Here's the short version: How are two batteries that should output 3V pumping out upwards of 15V, and why do just a few LEDs drawing 3 ma completely drain 5,000 mah worth of battery in just a few minutes of intermittent use?

Long version: I've been working on a project to replace the dead microcontroller on my Razer Blackwidow Chroma TE with the microcontroller of a Logitech K800 wireless backlit keyboard, thus bringing my mechanical keyboard back from the dead AND making it wireless. The mod is based on this guide: http://probably.ninja/keyboard/

Everything went fine until I started wiring the LEDs. The K800 circuit board has two pins for the + and - of the caps lock LED, plus a pair of wires that originally powered a string of small white LEDs to serve as the backlight. My mechanical keyboard has a separate RGB LED for almost every key (85 total LEDs). After researching how LEDs work like crazy, my plan was to wire them all up in parallel, with a resistor for each LED. I tested my idea on a breadboard, learning how to get various colors and brightness levels using different resistors on the various LED anodes. I could make different keys red, green, blue, purple, teal, orange and yellow. This was gonna be great.

(I can't get the caps lock LED pins to light anything up no matter what I do, but that's another problem).

I moved on to actually soldering the wires and resistors to the LEDs. I kept it simple by starting with just one LED, lit red with the cathode connected to the keyboard's LED + line and the red anode connected to the keyboard's LED - line through a 100 ohm resistor. It lit, everything seemed perfect. I added a few more LEDs in parallel. Then everything died.

The batteries were dead. Weird coincidence, as I had been running on the same pair of Eneloops for two weeks. I replaced the batteries with a freshly charged pair of Eneloop Blacks (2,400 mah). A few minutes of wiring and testing later, the keyboard died again. This pair was also dead.

These batteries are relatively new. I charge them with a Lacrosse smart charger and I believe the batteries are in fine condition and full. The same batteries were charged and put in other gadgets, where they ran just fine. Something was up with the keyboard. I had no idea how, but the keyboard must be discharging my batteries really fast.

I put in some full Eneloops straight from the charger. I plugged the LED wires into the power rail of a breadboard and started testing everything I could with a multimeter. Here's what I found.

(It took me a second to realize that I was actually shorting the power leads by measuring the current across the resistor with no LEDs, which must be why that measurement was different from all the others)

I tried putting more LEDs in series. One red and one green was 2.4V total, 3 ma. Adding a yellow increased it by another 1.1 to 3.5, still close to 3 ma. I got up to around 15V before the LEDs totally dimmed, and the current stayed around 2.6-2.9 ma the whole time.

Also, does it make sense to wire every LED in parallel, or should I wire as many LEDs in series as the power supply allows, and then wire each of those series in parallel with one resistor per series?

I haven't tried non-rechargeable batteries yet. I don't want to risk killing every double A in the house.

Another thing I didn't mention - the LED brightness is controlled by Fn+F5 and Fn+F6. I have the LEDs set to maximum brightness. I haven't tried it, but lowering the brightness would probably reduce the current to something below 3ma.

edit: I tested with a standard non-rechargeable, fresh pair of AA batteries. The power light went red after less than 5 minutes of on time and less than 30 seconds of total lit led time. All I can find when I search for this topic is people TRYING to quickly drain their batteries. I think they just need to come borrow my keyboard.

Here's a pic of the whole setup on the breadboard that drains the battery in minutes: 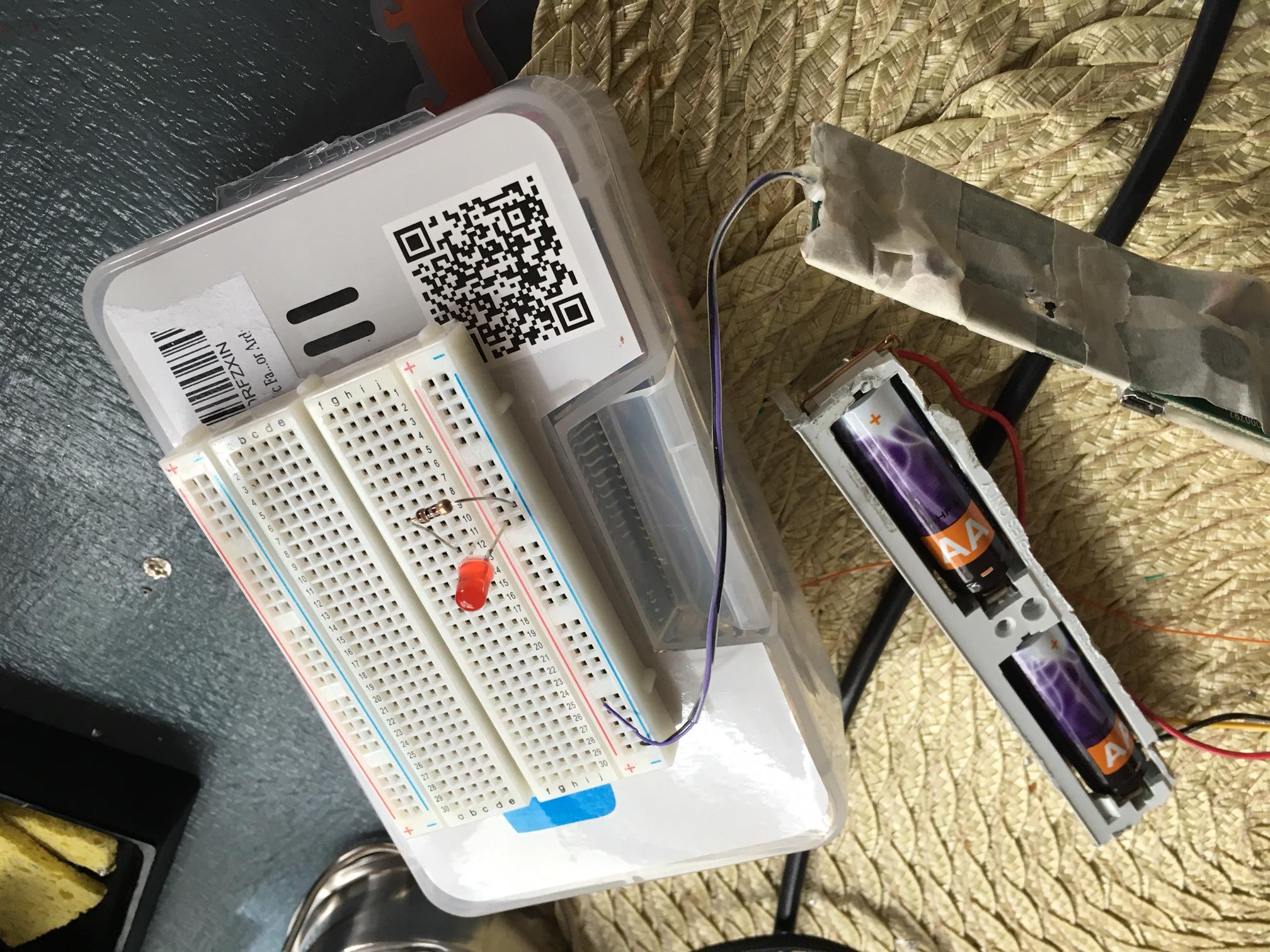 I can only assume there's a fault in my board. I don't know how or why or when it happened, but I cracked open another keyboard (I had two dead K800s in my junk box) and resoldered the wires to the new board and it seems fine. Haven't tried the LEDs yet.

I'd prefer to wire the LEDs to the caps lock pins since they give a constant, predictable voltage of 3V, but then my lights would only work WITH CAPS ON. Unless I can find a workaround for that (the modder mentions using the caps lock led power but does not give any workaround), I'll have to hope the LED backlight power works and doesn't fry the board again.

Note to self: the original backlight is a simple LED strip with 8 small white LEDs and a resistor, sandwiched in some kind of diffusing plate. I wonder how useful it would be to just jam that thing as-is in the case and ignore my per-switch LEDs. That would be no fun though.

Op is using a keyboard controller that apparently has a built-in step-up switching regulator IC or circuit for a constant current LED setup, with no idea of the specs, target current, voltage, or wiring for the LEDs. Considering the Logitech K800 is stated to have a 10 day life on fully charged NiMH with the backlight on, there's PLAINLY a short or something on the board or wiring. Check the original board for wiring details, and double check your modifications.

Old Answer: There is no way for 2x AA NiMH Rechargeables to be 15V. The nominal voltage will be 2.4V. From your description, you're obviously guessing the led voltage based on their typical recommended max, which is not how it works at a lower voltage. For example, a typical blue led will only be 3.3V Forward Voltage at 20mA. At 1mA, it may be down to 2V.

Not the answer you're looking for? Browse other questions tagged led batteries resistors rgb keyboard or ask your own question.

2
connect LEDs to USB keyboard – but they turn off after a second
2
Calculating LED current flow in a parallel circuit
2
RGB LED brightness levels
0
LED lights behave strangely, why?
1
Powering RGB Leds from 2 AA batteries
29
Why are the three component LEDs in an RGB LED so unbalanced?
0
Why many (resistor - LED)s connecting in parallel, current of each LED is not stable?
2
LED Blinking after replace