selecting a TIA - and using it for 60dB dynamic range

before entering in to problem:

my application is a laser pulse detection, in this process when a laser pulse falls on photo diode it generates current, for which i need a Trans Impedance Amplifier (TIA) (i read literature on benefits TIA have like SNR improvement and response time)to convert that current to voltage

How i selected the TIA

Now slew rate is to be calculated

So Matching both these parameters is TIA OPA659 from TI

with comments from experts about slew rate i have changed my TIA to THS3001 which has high slew rate and a CFA, (a point to note, even though the settling time of above CFA is 40ns i observed it to offer proper gain with out distorting pulse of 10ns in simulation ), when i tried to use very high BW and very high SR opamps like LMH5401 i found the opamp design to be complex due to fluctuation in common mode voltage and to be very prone to noise in simulation itself.

now my problem statement has become much complex

The bandwidth you have calculated is not considering the harmonics of the pulse. Consider that the pulse is 14ns long with inbuilt 2ns rise and fall repeating every 24 ns i.e. a symmetrical waveform. That has a fundamental of about 41 MHz but if you are interested in accuracy of the pulse shape then you should go for an op-amp with ten times this bandwidth.

A 1,000,000:1 range of input currents is really optimistic for a conventional TIA because noise will be a problem for low signals (50 nA) but there are some tricks you can do to improve the basic design such as bootstrapping: - 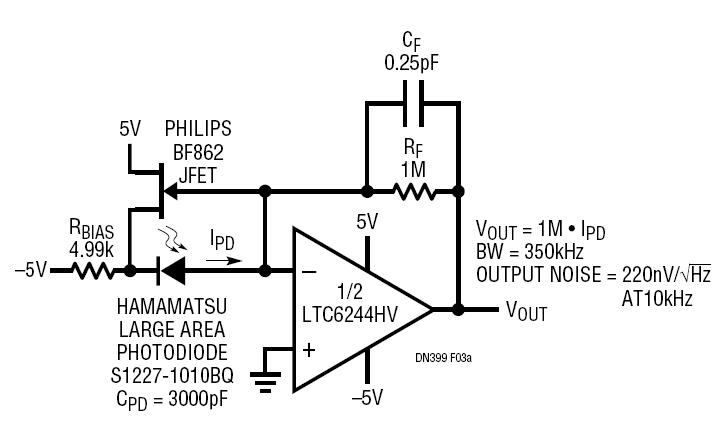 However, the 50mA Imax requirement is unfeasible (maybe you mean 50 uA). The 50 mA has to be sunk/sourced by the op-amp's output and this will significantly affect the choice of available devices. I doubt that you will find an appropriate device but maybe you have a cunning plan?

Consider also what feedback resistor value you'll need to produce a change in output of (say) 2V. 2V/0.05A = 40 ohms. What will be the output amplitude when 50 nA is applied? I calculate 2 uV and that signal is totally embedded in noise. Why will it be embedded in noise - consider the input noise spec for the op-amp - maybe it's 3 nV / \$\sqrt{Hz}\$. A TIA having a bandwidth of 400 MHz will produce 60 uV RMS of noise at the output. Do the math - the spread of your limits cannot be met with anything I know of.

If you do want to detect 50 nA you will want the feedback resistor to be much higher than 40 ohms. 40 ohms produces an output of 2 uV in a noise of 60 x 6.6 uVp-p. The 6.6 (sigma) number converts RMS gaussian noise to p-p noise with a confidence factor of 99.9%. So the output noise will be 400 uVp-p and, because of this, you will want your smallest signal to be (say) ten times this value at 4 mVp-p.

A 4mV output change from a 50nA input change implies a feedback resistor value of 80 kohm (not 40 ohm). But this raises the problem of the photodiode capacitance - at 100 MHz a 12pF cap has an impedance of 133 ohms. This capacitance and the 80k feedback resistor amplify the op-amps internal noise by a factor of ~600. In other words you cannot asssume that the photodiode's self capacitance is negligible. It is the "total player" in defining the noise you will get. My previous "simplified" analysis assumed the op-amp is unity gain but it isn't. The 3dB point is \$\frac{1}{2\pi RC}\$ where R = 80k and C = 12pF i.e. F = 165 kHz. In other words from 165 kHz upwards the noise gain of the op-amp rises by 6 dB per octave and at 100 MHz the noise gain (as previously mentioned) is 600 and your TIA idea is toast!

There are some mitigations; the op-amp doesn't have infinite bandwidth so although the noise gain rises from 165 kHz it won't hit a peak of 600 at 100 MHz because if it did your op-amp would have a gain-bandwidth product of 60 GHz and they haven't been made yet.

\$C_{sh}\$ is the photodiodes shunt capacitance i.e. the 12 pF. \$C_{i}\$ is the input capacitance of the op-amp (not negligible of course and adds to the problem). \$R_{f}\$ and \$C_{f}\$ is the feedback resistor and any capacitance in parallel with it (including parasites).

It looks to me like the noise gain is peaking about 10 MHz and is still going to be a big problem for a 50nA input signal and a 80 kohm feedback resistor.

The trouble is, you have to increase the feedback resistor to bring your signal out from the noise and by the looks of it by something like ten times and, this causes another problem. 800 kohm and maybe 1pF of parasitic capacitance in parallel gives a cut-off frequency of 198 kHz i.e. above this the signal drops at 6 dB per decade i.e. it's a low pass filter. You were aiming for a bandwidth of maybe 400 MHz and you are crippled at anything above 200 kHz. Even if the feedback resistor were 80 kohm the BW would still only be 2 MHz.

Summary - alter your spec or hugely adjust your expectations.

It's also worth spending an hour or two using ADI's photodiode design wizard. Even if you don't use one of their devices you can learn a lot by experimenting with it.

Not the answer you're looking for? Browse other questions tagged amplifier photodiode laser or ask your own question.