Apologies in advance for probably missing a lot of things. I'm pretty new to electronics.

I'm doing the multiplexing by turning on a column with the 595, one at a time, and then setting the appropriate values for PWM for the TLC, lighting the rows in a columns at desired value.

Multiplexing works fine already but scale becomes a problem with the current 8x6 array i have built (6 out of 16 so far connected to the TLC). I'm pretty sure my problem is that turning on a column with the 595 can not supply enough juice for the 16 leds in it. The leds have a forward voltage of 3.3V with 20mA current. This would mean the 16 leds in series would eat up ~53V @ 320mA, which is far above what the 595 can provide and the TLC can sink. How would i go with making this work? Is there some magic i can do in software to help with this (my guess is not)?

I've been looking at adding a darlington array (something like ULN2803) to pump up the voltage to 50V per channel. This i guess would be fine if all 16 leds would be on at the same time but if only 1 is on the led will most certainly fry. Because of this i guess i need to be able to add a resistor that changes value depending on how many leds are on at a given time. I was thinking of putting in a digital potentiometer to do this but it feels a bit overkill + i haven't come up with a good solution for hooking this up (without putting a single one on each 2803 output)?

Ideally i'd keep the circuit quite simple but i'm open for ideas so any suggestions are more than welcome! Also I wouldn't be surprised if i'm totally missing the point on the problem..

If you were running the LEDs in series then yes, you would need a higher voltage. You aren't though - otherwise they'd all be on or all be off. You are running them in parallel.

From what I understand of your description you have the one output of the '595 going into the anode of the all the LEDs of one column. The cathodes of these LEDs then go into separate inputs of the TLC for PWM.

And, as you say, the '595 can supply 35mA of current per output. That is enough for to light one LED reliably.

You will need to supply 6 times that current for 6 LEDs. 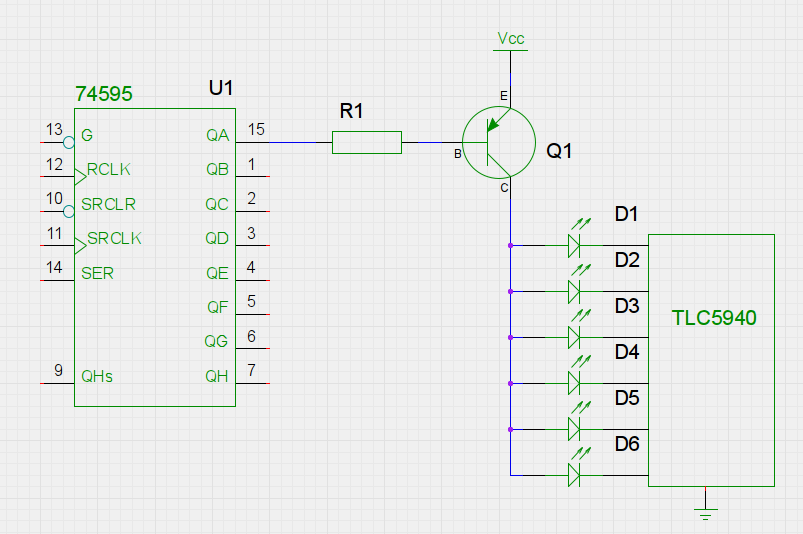 You can't use the TLC with, for example. a ULN2803 as they are both current sinks. You need something which can be a current source, which a transistor can be.

You need to use a pnp transistor as the high-side switch. Use the 595 to drive the transistor (0 is on, 1 is off) through a resistor to limit the base current. The discrete transistor will be able to source far more current than the shift register.

Unlike what others have said, you don't need a PNP high side switch. That's one option, but a NPN emitter follower is even simpler. Connect the collector to the 5V supply, the base directly to the 0-5V column drive logic output, and the emitter becomes a voltage source for that column. The digital logic output only has to supply the column current divided by the transistor gain. For example, if the column current is 300 mA and the transistor gain is 80, then the digital output only needs to source 4 mA.

This scheme provides up to about 4.3V, which leaves about 1V for the low side switch and current limiting resistor. In this case I would use NPNs as low side switches.

Not the answer you're looking for? Browse other questions tagged arduino current multiplexer 74hc595 or ask your own question.