Circuit completes whether base current applied or not - transistor

My fourth electronics project ever. The most challenging yet.

I've wired up this project (Project 4 - Short Circuits project kit Jaycar Electronics). After much research, it doesn't do what I expected. I complete the circuit by touching the two probe wires together and the LED flashes - so far so good.

I then disconnected the wire running from the emitter to the 100k resistor and connected the two probe wires again. The LED still flashed. I expected it not to flash because the base current can't flow through a circuit (out of the base) due to the fact the circuit was broken by me disconnecting the wire.

My expectation was that no current can flow between the collector and the emitter until a base current was supplied. Perhaps the calculation of the impedance was understated and a current would flow from the collector through to the emitter anyway because the current is simply to big for the transistor to resist, base current applied or not! 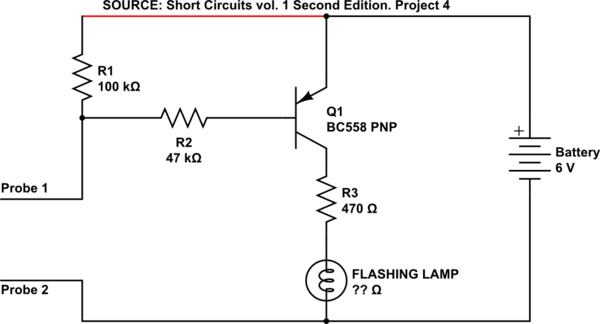 I think I'm missing something quite fundamental here. I'm not experienced enough in electronics to accuse a textbook of being incorrect.

Assuming battery + is on the transistor/R1 connection, and battery - to the lamp/Probe 2 connection:

By disconnecting the wire going to the 100K you are only removing the part of the circuit that tries to ensure the transistor stays off when it should. The 100K makes the circuit a bit less sensitive so that only a somewhat lower resistance short (between the probes) turns on the lamp (or LED). With out the 100K connection there is a chance that the lamp turns on slightly if you just short the probes with your hands.

But even with out that connection to the 100K, shorting probe 1 to probe 2 will still pull current through the emitter/base connection of the transistor, (with the path being from the battery, to emitter, to base, through R2, probe 1, probe2, and back to the battery.) This turns on the emitter to collector path, turning on the lamp.

When the probes are touched together, current flows from the battery (+) through the emitter to the base, and then through R2 to the (-) (what would ordinarily be ground). This base-emitter current biases the transistor on which lights the light on behalf of the resulting emitter-collector current.

R1's job, then, is to try to hold the base at the same voltage as the emitter, so the transistor (and light) will stay off when the probes don't touch.

Not the answer you're looking for? Browse other questions tagged transistors impedance kits or ask your own question.

2
Why is my transistor ON when charge is only going to the base?
10
Why can't you go sticking a voltage across the base-emitter terminals in a transistor?
0
Circuit works with BC557 PNP transistor, but not TIP32C?
5
Can I use a capacitor and a transistor to create a circuit which automatically turns off an LED after a period of time?
0
Why is current flowing mostly through the base (NPN transistor)
9
Capacitor in series with transistor base
0
Confusion with how to ground base of transistor
1
Where did the base get the current from?