Why does a neon lamp indicator on a power strip switch flicker in the dark?

When the neon lamp is ON in a dark environment (lights of the room are off), the lamp begins flickering and it sometimes goes off for a few seconds.

Is the light-making-mechanism in neon lamps affected by the light intensity of the surrounding environment? 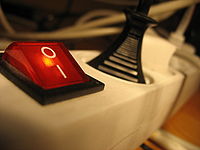 UPDATE: I captured my observations with my iPhone and uploaded it to YouTube. Here is the link of the video: https://youtu.be/1jlUmEfGHZA

All the lights of my room were turned off. There were no plugs connected to the power strip. The only source of light was the screen of my MacBook Pro, which was not plugged in. I increased and decreased the brightness of the computer screen during the video. I then produced two additional light environments using my phone.

Yes, it is bizarre and a trouble-shooting nightmare for the unaware, lol. But you can use a simple neon bulb as a photosensor. But also, they do flicker more and more as they age and die: but they are not really dead, they just need more power than the source device gives. If you ramp up the juice (in a different device) they will work for a while longer.