If I draw the diagram of a transformer, and try to find-out the direction of current using Lenz's law; if I keep the coiling-pattern of primary and secondary coils Same (Say both as righthand-screw, or both as Lefthand-screw); I'm getting an 'opposite', i.e. 180-degrees phase-shifted currents in the 2 coils.

is it the case indeed?

However I do-not know, in which-way Lenz's law acts in transformer; because the law states the induced current will try to hinder the cause. but when the secondary circuit of a step-up transformer turned On (closed) , so-far I've know , the current in primary-coil goes-up 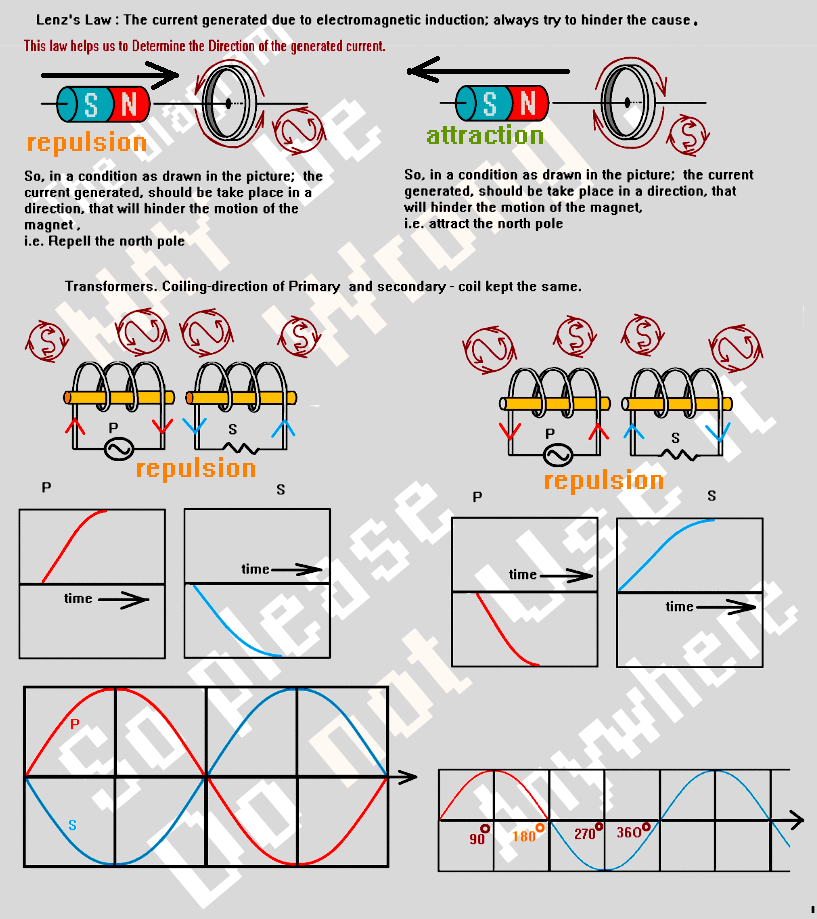 However, since Amount of Induced-current depends upon CHANGE-rate of magnetic field (Faraday's law), => Amount of current induced in a secondary coil (at a moment), is proportionate with CHANGE RATE of current of the Primary coil;

NOT on the CURRENT in primary coil directly (though it apparently seems from the graph). So, same phase-state of primary coil and secondary coil means, in AC, the Graph for Current, and the graph for Change-rate of current, is same. I want to know also, am I right? because, if it was not, then surely a phase difference would found.

This answer explains that for an unloaded secondary, the natural phase relationship between primary voltage and secondary voltage is is zero degrees.

This of course is for an ideal transformer and a resistive load.

If you ignore the leakages and magnetization inductance of the transformer, and the load is reactive, then there will be a 90 degrees phase shift.

The low frequency transformer equivalent circuit is this: -

As you should be able to see, if you considered all the leakages, magnetization inductance and losses and then added a semi-reactive load, the phase angle is quite complex to calculate.

However I do-not know, in which-way Lenz's law acts in transformer; because the law states the induced current will try to hinder the cause.

Strictly speaking, it is voltage that is induced and any current that flows is subject to the that voltage, the load and the leakage inductance.

but when the secondary circuit of a step-up transformer turned On (closed) , so-far I've know , the current in primary-coil goes-up

In normal usage, for a voltage transformer it is non-ideal to consider the secondary being short circuited. However, it makes no difference to the phase angle providing you obey the rules inherent to the model.

It depends on 1) the reference direction chosen for the currents of each coil, and 2) the spatial orientation of the two windings; also, the phase shift can change depending on whether the transformer is considered as ideal or real. With respect to point #1, remember that, just because a current is labeled as \$i(t)\$ in a circuit diagram, with an assigned reference direction (for example, from node A to node B), it doesn't necessarily mean that the numerical value of the current is positive at a given instant, i.e. that the current is actually flowing from node A to B. With respect to point #2, since you said

If I draw the diagram of a transformer, and try to find-out the direction of current using Lenz's law; if I keep the coiling-pattern of primary and secondary coils Same (Say both as righthand-screw, or both as Lefthand-screw) [...]

there's no ambiguity in the orientation of the coils; actually that's the typical construction assumed when explaining the operation of a transformer; the following construction has the two coils oriented in the same direction (i.e. additive spatial orientation), as you assumed: 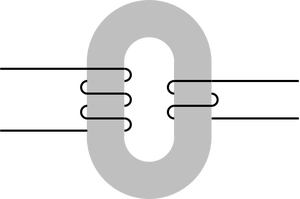 Going back to point #1, I'll assume the reference directions of the primary current \$i_1(t)\$ and the secondary current \$i_2(t)\$ in a way that's intuitive. Suppose that during some time interval \$\Delta t\$, a positive current entering the upper terminal of the first coil, denoted by \$i_1(t)\$, is increasing, as shown below. Then, applying the RHR for coils, we get that the flux in coil 1 has its north pole above, and so the flux due to \$i_1(t)\$ is in clockwise direction. An EMF is induced in coil 2, and assuming a passive element (e.g. a load) is connected to that coil, then a current \$i_2(t)\$ is also induced in coil 2. Applying Lenz's law and once more the RHR, we get that \$i_2(t)\$, assumed positive during the interval \$\Delta t\$, has a direction such that it exits the upper terminal of the second coil, as shown below (the flux due to \$i_2(t)\$ is not shown). 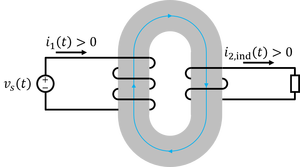 If the winding orientation of the two coils were opposing, then the result would've been different. Also, if the transformer is considered as real, there'll be some additional phase shift due to the phenomena ignored in the ideal transformer.