Why are SMD LEDs shipped in a sealed bag containing desiccant?

I had a selection of 0805 LEDs in my last Mouser order and was a bit surprised to discover they arrived in heat-sealed (rather than folded and taped with sticker) bags containing a desiccant bag and some sort of litmus-esque paper indicator saying something about baking them if the dots on it went pink (instead of blue). 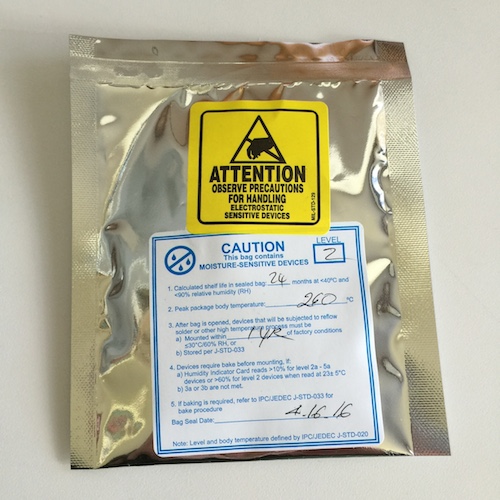 A quantity of through-hole LEDs I had in the same order just came in the regular ESD-protective bag, folded over with a sticker.

What's up with SMD LEDs that they work so hard to keep them dry? Surely their dryness can't be assured once they're installed. Does it have to do with their solderability or something? Why would that be different than other SMD parts?

Through-hole components are generally hand or wave soldered. These apply on local heating to the pads and not to the component itself.

SMD parts on the other hand are generally reflow soldered. This involves putting the entire part in a hot oven for an extended time. The components are generally made from porous materials which by their nature absorb moisture from the atmosphere. If they get water inside them, putting the parts in an oven can cause it to rapidly turn to steam which in turn expands and can fracture or destroy the part. As such the devices are packed for shipping in such a way as to reduce the risk of exposure to moisture.

Parts that have been out of a sealed bag or which have been sitting for extended periods are generally baked at a lower temperature first to cook off any water before being reflowed in order to stop fracturing.

In the case that the parts are being hand soldered, baking is probably not necessary, especially since it will likely not be a production run. But the distributer doesn't know this, so they do their duty and ensure the parts are properly packaged.

The same applies to ICs as well as LEDs. In fact there are also different classes of sensitivity - some parts are more moisture sensitive than others, and as a result require different levels of packaging and/or have different shelf lives.

In your case it is a Level 2 device which is one of the lesser sensitive parts - pre-baking isn't strictly required unless they are exposed to >60% humidity measured at room temp and they can be stored in the packed bag for many months.

The LED package will absorb moisture. When you raise the package to soldering temperature, the moisture turns to steam and the increased internal pressure will damage or destroy the component.

We deal with this every time we work with moisture-sensitive SMT devices such as ceramic capacitors. They need to be baked before they are soldered - either by hand or via reflow.

Not the answer you're looking for? Browse other questions tagged led soldering surface-mount humidity or ask your own question.

12
Why are SMD resistors marked with their value, but SMD capacitors are not?
0
Why can't desoldering wick be used to desolder SMD?
6
Are SMD components sometimes glued?
5
Are thermal reliefs on SMD pads beneficial when reflow soldering?
5
Moisture Sensitivity Level - More than one chip in sealed bag
4
Why are there no easy-to-solder SMD diodes in 0603 packages?
3
Is it safe to use hot air on SMD LEDs?
5
What's the third footprint pad on some SMD LEDs for?
3
How are these LEDs powered on?