Question is: 1) How is maximum frequency attained with source synchronous more than common clock mechanism ? As maximum frequency depends on data path which will remain constant for both clocking techniques. We have the following equation for setup time of flip flop. Tclk2q + Tcomb < Tperiod + Tskew -Tsetup Thus: Tperiod > Tclk2q + Tcomb -Tskew + Tsetup From this we see Tperiod(1/Max_fequency) depends on Data delay (constant for common clock and source synchronous).

Provided a particular data bit is not associated with a particular clock edge, there is no reason both schemes cannot achieve the same speed; this is true in quite a few serial standards. Note that the reference clocks that are used are normally much slower than the interface speed; they are used internally in the data link endpoints via a PLL to generate the interface clock.

Consider the reality of the clocking schemes:

Here are the two schemes, but with an important addition - the local reference clock used in source synchronous schemes: 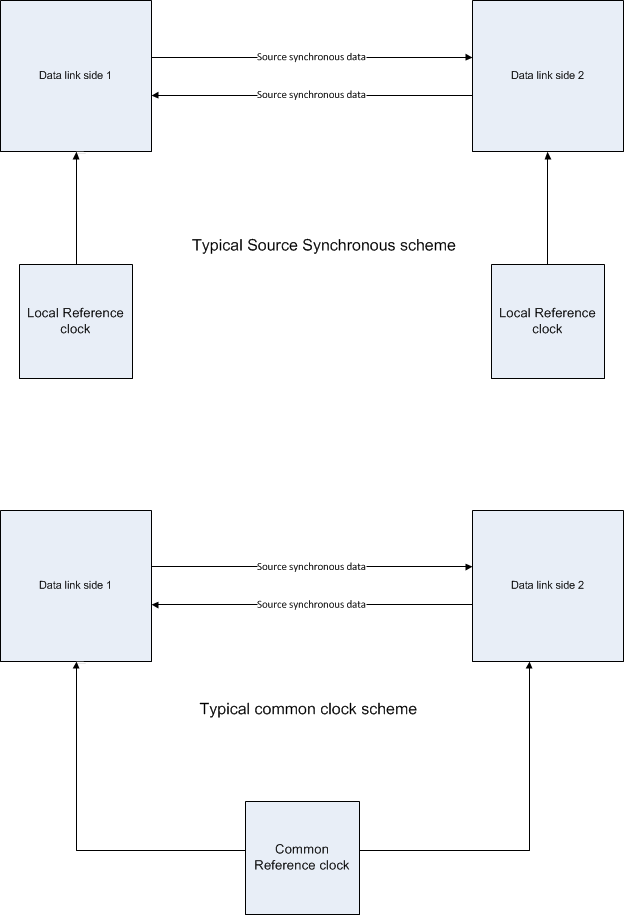 The local reference clock is required in source synchronous schemes as we need a local clock to clock data out in the first case. This also means that the receiver clocks will be slightly different (no two oscillators are precisely the same frequency).

Some serial standards implement this, such as Infiniband and PCI Express to name but two.

Due to the need for a local clock at each end of the link, which will differ (the specifications permit this, quite reasonably), the links are operating at different speeds in transmit and receive. This adds a new requirement to the link to prevent receiver buffer overrun and introduces the concept of the Skip ordered set; i.e. an elastic buffer is required (ordered sets are important for many reasons) adding a bit of complexity, but a clock does not need to be distributed for proper operation (very important in board to board or even box to box links).

The distributed clock architecture usually has no length match requirement on the common clock, so although the clock frequency is the same at each point, the relative phase is unknown, so the receivers must dynamically determine which edge of the clock to use to clock data in; this adds complexity as well.

In addition, board to board and box to box implementations of this type would need this distributed clock, adding wires and buffers which themselves add complexity to the overall system.

Interestingly, PCI Express supports this mode as well, as well as HyperTransport.

So which scheme is better? Neither - they both have pros and cons; the specific application determines which is appropriate.

1) I do not understand your labels. Have you included interconnect delay in your calculation? Interconnect delay can be a significant if not a dominant factor (even within an IC). In source synchronous configuration, if the delays of the data and clock lines are well matched, then the effect of the interconnect delays on toggling rate get canceled, allowing faster clock rate.

When it comes to very high speed off-IC interfaces, the interconnect delay is typically longer (or much longer) than the clock period. Take USB3 for example, at 5GHz, the period is 0.2ns, while an 1 meter cable would have delay of around 6ns. The clock and data interconnect delays are perfectly matched because they are actually encoded into the same signal.

2) For a typical design involving flip-flops, the inputs and outputs are cross-connected by combinatorial logic. This is certainly true with designs resulted from register transfer logic (RTL) method. Looking at an example of FF1 output leads to FF2 input, and FF2 output leads back to FF1 input, there is no avoiding the interconnect delay because FF1 has to operate with one clock.

A possible alternative is to impose source synchronous operation anyway such that the cross-connected signals to FF1 come in with a different clock, then those signals have to be re-synchronized to FF1 with the penalty of one clock delay, but this does not make sense because it is most likely slower and more complex to design.

Not the answer you're looking for? Browse other questions tagged clock flipflop synchronous physical-design or ask your own question.

6
master-slave flip-flops
6
Ripple counters versus synchronous--pros, cons, and power consumption
3
Syncing Signals with Global Clocks in FPGAs/CPLDs and Edge Detection
1
Cyclical output counts from a D Flip Flop, what is this effect called?
0
Am I having an impedance issue in a cable between two devices? And if so, How can I resolve the issue?
4
Maximum frequency of the synchronous counter
2
FPGA - Synchronous inputs with higher frequency than the board clock
0
Design help clocked synchronous state machine