I recently bought a 2N7000 transistor and though it was a cheaper replacement MOSFET compared to the STP55NE06 as I didn't need to handle high voltages and high currents. However it acted very differently. Usually with the STP55NE06, when I connect like this: 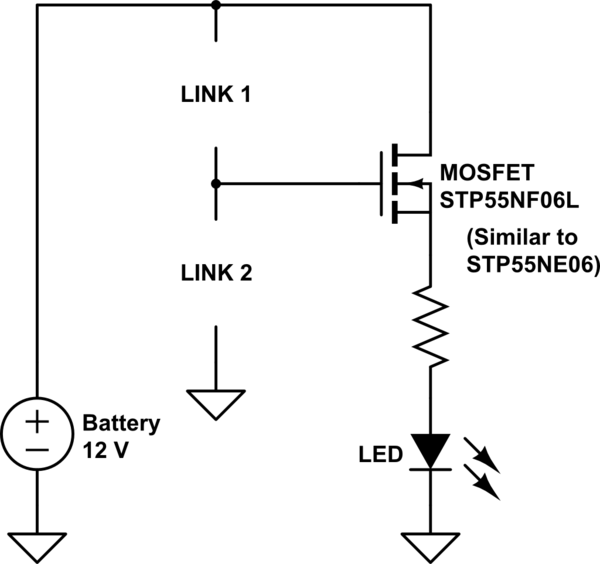 The LED starts as OFF (assuming the MOSFET gate was previously set to ground). 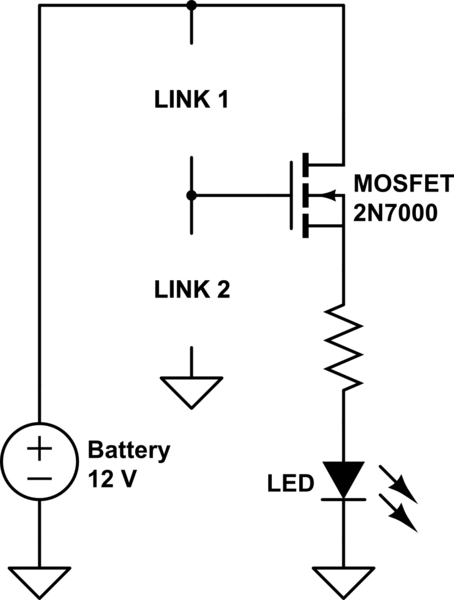 It honestly feels like the 2N7000 behaviour is like the STP55NE06 but with a pull up resistor on the gate...

Also how come I can power the LED like this (albeit quite dimly): 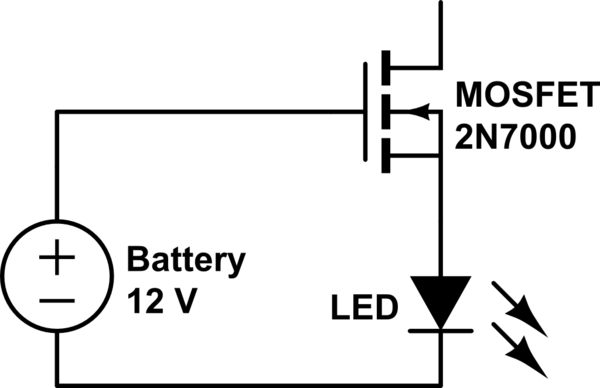 Wait this means that my theory with the 2N7000 having a internal pull-up resistor could be true.

Anyways, can someone tell me why 2N7000 behaves so differently compared to the STP55NE06 despite both being Mosfets?

Edit: I measured the resistance between the GATE and DRAIN of the 2N7000 and I'm surprised to see a 6.5k resistor between it. The STP55NE06 had NONE! additionally the 2N7000 has A DIODE from SOURCE to GATE. The STP55NE06 also had NONE! It's like this: 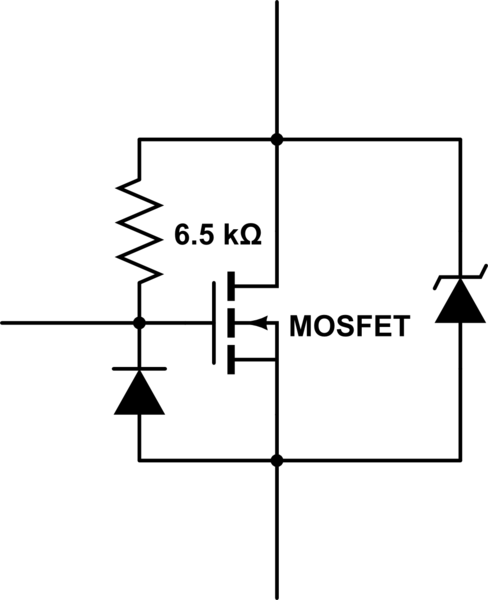 Can someone confirm that there is a pull up resistor and a diode inside the 2N7000?

One thing you haven't considered is that the particular 2N7000 sample you're experimenting with may be faulty (you could easily damage it with an ESD for example). Or perhaps you have got an STP55NE06 with a far better gate insulation than the spec requires, and an 2N7000 which just barely meets the spec.

I suggest you repeat your experiments with a different 2N7000 sample. Chances are the weird behavior will go away.

I'm not enough of a MOSFET expert to tell you how the 2N7000 gets its floating gate charge in this case. So you basically need to make sure "link 2" (to ground) is connected to keep the 2N7000 off.

And regarding the accepted answer, according to Infineon (p. 6) soft ESD damage results in an increase in leakage current, not the other way around. The reason for this is that (soft) ESD damage is characterized by a deterioration of the (edges) of the gate oxide layer. So the 2N7000 that worked for you may be one that's actually more ESD damaged than the one that made you unhappy. However, I stated in a comment, since floating gate use is off-datasheet use (because there's no minimum or typical leakage current promised), manufacturing variation is actually enough of an explanation for why two 2N7000s behaved differently in your circuit with their gates floating.

And as I as I said in another comment, your finger may have enough charge to turn on a MOSFET and even leave it on for quite a while. The less charge a MOSFET needs, the easier is to do this and the lower its leakage current is, the longer it will retain gate charge. That demo is for a 5nC (typ.) to 30nC (max) gate charge MOSFET. Again there's no minimum leakage specified, so no max discharge time can be inferred. The datasheets for MOSFETs in general only seem to give a max leakage current, which puts a lower (but no upper) limit on the discharge time with the gate floating, i.e. they promise the gate doesn't lose charge by itself faster than a certain rate, which is what you care about in typical usage (i.e. with gate connected). Floating gate usage is not something that most MOSFET manufacturers care about.

Not the answer you're looking for? Browse other questions tagged mosfet floating or ask your own question.

3
Simple transistor circuit with unconnected gate pin acts strangely
0
Lower current through different transistors
0
mosfet gate different voltages along trace
1
Is a gate resistor needed on a 2n7000 mosfet when driven by a 4543 BCD for multiplexed led display?
4
2N7000 Mosfet destroyed during soldering?
2
2N7000 NMOS only switches properly when gate and source is connected with 1MΩ
0
MAX809 driving a mosfet