Rules for choosing power rating of a resistor

Let's say we're designing a system, and within it we have some resistor \$R\$ with a voltage difference \$V\$ across its terminals. Then it dissipates power \$P = V^2 / R \$.

The voltage has also a certain "tolerance" (maximum ripple over a regulated nominal voltage), so its value lies between \$V - \Delta V\$ and \$V + \Delta V\$.

When deciding what power rating to pick for the resistor, I believe it makes sense to put ourselves in the worst possible situation, so the highest possible dissipated power would be \$ P_{max} = (V + \Delta V)^2 / (R - \Delta R) \$.

If we assume we precisely know the values for \$ \Delta R\$ and \$ \Delta V\$, how much bigger than \$ P_{max}\$ should the resistor rating be? We already are in the worst possible scenario, should we give ourselves some more error-space anyway?

Also, is there a more robust method to compute power rating than the one I mentioned?

In engineering for commercial test equipment, we had a default rule that resistors should never be run beyond 50% of their rated power. This rule meant you didn't have to consider their contribution to the overall equipment MTBF, when the resistor manufacturers rate the dissipations for ambient temperature and a X0000 hours lifetime. Every so often, we couldn't meet this generous over-design, and then we'd need to do detailed calculations, including ambient temperature.

For military or auto under-hood electronics, you would derate even further for reliability.

As Military was mentioned I will specifically address it.

I am in Mil/Aero currently and aerospace applications for commercial aircraft have stringent reliability requirements as does military equipment. 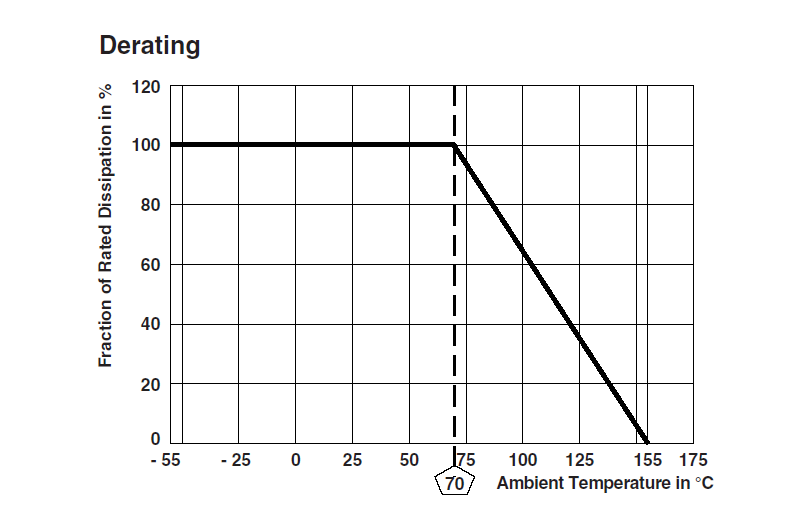 In these applications, we are conduction cooled (convection cooling loses meaning in an unpressurised avionics bay as the molecular density doesn't support much thermal transfer), so we take the card edge temperature (typically we have to withstand about 85C there) and add the thermal impedance of the PCB, so we usually end up with an environment of about 90 to 95C at the component.

Note that even at that derating value, it still forms part of the reliability analysis (usually done to MIL-HDK-217).

Note: For this series of parts, the thermal rule is you cannot exceed 155C within the part itself (see datasheet).

If you are running at close to the rated power, consider the environmental temperature , and the effect that temperature may have on other parts.

But generally I stick to 75% of the rated power.

Running at rated temperature (or even 75%) requires flawless cooling in ideal operating conditions - the rating assumes that. Even then your resistor will have a surface temp of 600-700F which is enough to set a lot of things on fire.

I am not bashful about overrating by 400 percent. On a project where I did just that, I still had a 260F rise. It was worth the peace of mind of not having to worry about that component in decidedly non-ideal operating conditions.

If I want reliability and the resistor in question is dissipating sufficient power that it's worth considering (rather than "small signal") I would derate by at least 50%. Even quite low apparent heat levels have an insidious effect on reliability over the long term. I would also give as much "breathing room" in terms of space and airflow as possible.

I just dismantled for refurbishment a power amplifier I built 29 years ago (boy, I feel old) and was rather gratified to find no symptoms of overheating anywhere.

Not the answer you're looking for? Browse other questions tagged power resistors tolerance or ask your own question.

0
Why do different resistor values dissipate power at different rates in RL and RC circuits?
10
Voltage rating vs. power rating of a resistor
3
How to choose a properly rated power resistor for pulsed current?
1
Pull-up resistor power rating on signal wire in automotive?
14
Resistor surge rating
0
Dielectric Withstand Voltage of resistor
0
Intermittent power dissipation calculation on TO-220 package
0
2 Possible Currents and Vdrops from same Resistor: Which Will it Be? [Beginner]
2
What exactly does a resistor's tolerance rating mean?
0
Resistor power rating and circuit stability