How does Hybrid Ground Works? 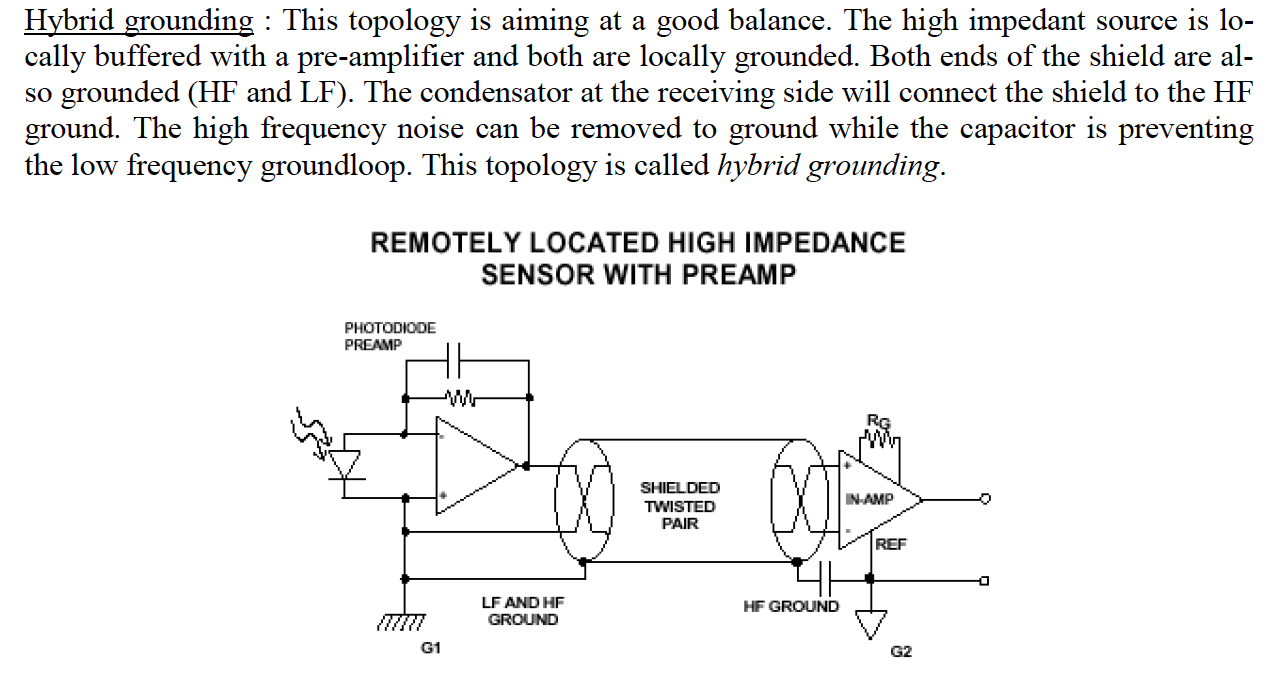 The text that is above the figure is from my textbook and i am having difficulty to understand what it is trying to say because it's not in detail!! why only remove high frequency and prevent low frequency using capacitor on ground G2? also What is the difference between both the grounds?

The critical reason for the low frequency blocking capacitor is avoiding large DC currents to flow. In any practical application, "ground" is only at zero potential in a very small region; the "ground" potential can vary across a circuit board, equipment chassis, or or larger assembly of equipment (telecom, AC power, building) due to current flow and non-zero resistance. Thus, connecting the shield of the twisted pair to both the sensor and the amplifier could cause such current flow between G1 and G2, since they are different "grounds." Depending on the reasons for the ground loop and the common grounding conductor, it is possible for a little interference to thousands of amps to flow because the two grounds otherwise have a high-impedance connection. This depends on the equipment and other electromagnetic situation at each end of the sensor wire connection.

However, neither is it going to be hundreds of kHz - it's going to be mainly from 50 Hz to a few hundred Hz and maybe a few kHz. But, if you put a wire between those two points what would happen - you'd get ground currents travelling along the screen of the cable. Those ground currents may be "low" in frequency but they could still induce "volts" in the signal wires. Yes, it'll be common mode noise but it could still upset things and severely degrade the signal at the receiving end.

Personally I'd ground the screen at the receiver end and leave it open circuit at the send end and if it doesn't look good I'd put the capacitor at the sending end. Personally I think they got there diagram the wrong way round.

Not the answer you're looking for? Browse other questions tagged noise ground grounding groundloops signal-to-noise or ask your own question.

3
Why is a shielded cable not effective with high impedance sensor?

5
Does potential difference exist between Earth ground in geographically diverse locations?
0
Voltages with an earth ground
12
When does and when doesn't current flow to ground?
4
What is the point of seperating analog ground and digital ground if they are going to meet at the end
1
Equalizing unequal grounds with batteries
3
Why doesn't electricty flow to earth ground when I connect my oscilloscope ground clip to a floating circuit?
5
Art of Electronics ground noise treatment puzzle
0
What is the electron density in a capacitor relative to source/ground?
1
How to mitigate an unavoidable ground loop in a vehicle?
5
Why is main ground and circuit ground explicitly separated here?