I have a DC inverter that's rated for 3kw sustained with a 6kw peak (for up to 5 seconds).

Per the Inverter manual, the manufacturer recommends a battery fuse rated for "at least 350 amps".

How can I determine what size fuse would be ideal in order to accomplish the following:

I was considering a 400amp fuse, but I'm not sure how to determine if it fits the bill without trying. Frankly, I'd rather have a breaker with similar characteristics since these fuses are upwards of $50 a piece, but it is what it is.

This is a photo of the fuse: http://ecx.images-amazon.com/images/I/71FMkor8t7L.SX355.jpg

Here's a fuse that I found on Digikey that might be close to what you need: 0298400.ZXH (I didn't actually compare it against the requirements you mentioned, so don't assume it's the right one). The datasheet has these figures that you'll need to study to determine if it meets your requirements: 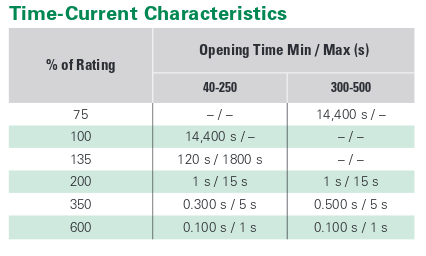 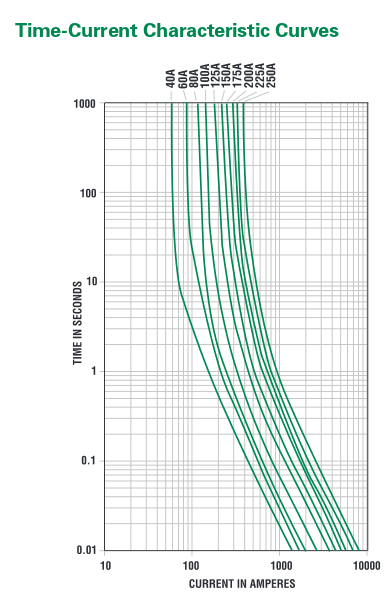 If this part fails your requirements, you can use the parametric search tool (which any good electronics distributor will have) to find more fuses and compare their datasheets.

You have another answer that advises not to buy from Amazon. Your description illustrates why. A Class T fuse is not a slow-blow fuse as stated in the amazon description it is a fast blow fuse. If you buy from Amazon at least try to find the manufacturer's specifications and check them. There is still some risk that you will get a counterfeit part.

If the manufacturer doesn't specify a fast blow fuse, don't buy one. They are more expensive than standard fuses. The fuse is not going to be fast enough to protect the inverter from damage due to an output fault. It is very difficult to protect power electronic circuits with fuses. The best designs have electronic protection. In some cases, the manufacturer will recommend a specific fuse, but that is not to protect the electronics circuit from damage. It is used to prevent the equipment from exploding or starting a fire if it fails. It is probably required by the UL listing.

The inverter manufacturer probably put a high minimum on the battery fuse because a standard fuse of that ratting can withstand the inverter's capacitor-charging surge current when it is first connected to the battery.

You should select it according to the battery manufacturer's recommendations. If they recommend less than 350 amps, get a different battery.

It appears that most fuses that are not specified as "slow blow" may be considered to be "fast blow." The Class T JJN fuse is probably more expensive than you need because it is rated for a higher voltage than you need. Look at ANN and CNN fuses. They are rated 125 V AC / 80 V DC.

Not the answer you're looking for? Browse other questions tagged batteries dc inverter fuses or ask your own question.

1
Is there a standard stating how fast a fast fuse is, how slow a slow fuse is?

30
Slow Blow vs Fast Acting Fuse
28
Why did my fuse not blow?
2
How to blow a 0.6 ampere fuse
1
Is there a standard stating how fast a fast fuse is, how slow a slow fuse is?
0
Slow-acting trage fuse unexpectedly blowing
2
fast or slow fuse in transformer
0
What is the difference between “Slow Blow” and “Time Delay” fuse?
1
Fast-blow instead of slow-blow fuse in consumer hifi power supply
0
How to choose the correct fuse in a double paralled battery supply system?
2
Jump starting a motorcycle behind a fuse? (slow blow atc fuse?)