How deleterious is topping-off my Li-ion batteries (phone/laptop) every time they drop to 90%?

I have read recently that frequent top-off charging of my personal electronics is hard on the batteries. Specifically, Li-ion batteries in recent model smart phones and laptops will show significant loss of capacity after (very roughly) 300 cycles between the remaining charge levels of 90% and 100%.

Below is a 'cartoon' of a plot to help clarify my question. Is cycling between the 90% and 100% points 'harder' on these types of batteries than an equal number of cycles between the 40% and 90% levels?

By 'harder' I mean a significant loss in battery capacity after (very roughly) 300 cycles, versus maybe 3,000 cycles.

I'm not looking for opinions or best guess - I need a fairly clear answer with a link to further reading, and ideally an actual plot of this phenomenon - model or data.

edit: assume the charging is managed by the built-in electronics according to manufacturer's specifications.

NOTE: This question requires an engineering answer, but let's assume I am not so much of an engineer (anymore) that I have actually taken my phone and laptop apart and I'm hooking up volt meters to the individual cells!!! 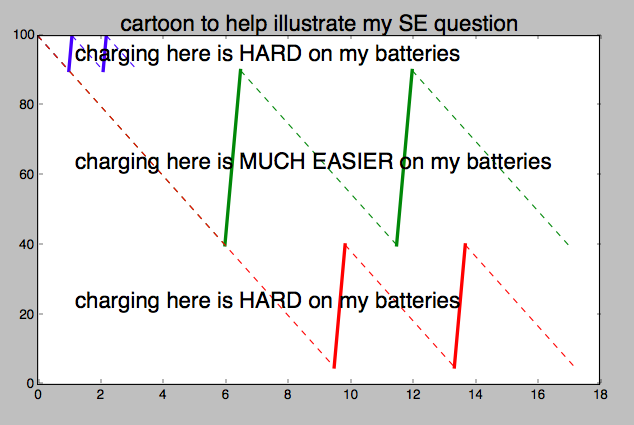 Yes, fully charging and discharging the battery will result in lower lifespan. The difference is not 10 times, but it is significant.

Here are some example plots from Kokam. For the 80% and 20% tests every 50th cycle was done at 100% (the vertical red lines) to check the full capacity.

At 80% it took over 1500 cycles. This is 5 times more cycles, but closer to 4 times improvement since only 80% capacity was available per cycle.

At 20% it managed 3000 cycles. This sounds impressive, but since only 20% of the full capacity was extracted it is equivalent to far fewer than 3000 full charge/discharge cycles. Depending on how the device being powered uses the available voltage and capacity, it may even be worse than cycling to 80%.

The main reason that a Lithium-ion battery 'wears out' is stress caused by expansion and contraction of the active material as lithium ions are squeezed in and out. Limiting the amount of charge/discharge reduces the expansion/contraction amplitude, which lessens damage to the plate material.

However, even if a lithium-ion battery is held at constant state of charge the plates will still degrade due to oxidation. This occurs faster at higher temperature and voltage, so keeping your battery cool and at less than full charge will increase its shelf life.

For a device such as a laptop which is usually used on mains power, it is better to run the battery down a bit and (if possible) remove it until it is needed. A device which is left unused for long periods should be stored with the battery partially discharged, and not recharged until just before the next use.

0
Charging batteries at different rates and the associated side-effects?
10
Charging Li-ion batteries in parallel
6
Why do Lithium Ion batteries self discharge?
0
Trickle charging a Li battery from motorcycle battery?
2
How to estimate Li Ion Battery SOC?
2
How to find out what level of battery voltage corresponds to 50% discharge?
5
Why are(n't) rechargeable batteries damaged by partial charging?
1
Can we do better than CCCV charging?