Light an LED when load is in circuit

I want to have a LED light up when a load is in circuit, and go out when it is not. 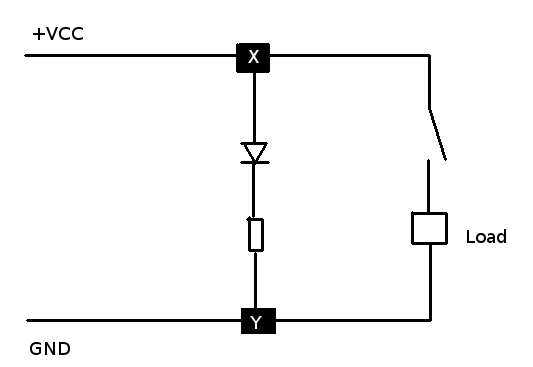 Initially I set the circuit up so that the LED is in series with the load but this didn't work. I think possibly because the voltage drop across the resistor was too high. I could adjust the input voltage to match but I'm not sure I entirely understand the impact of doing so, especially given that the load might be variable.

It occurred to me that maybe I can use a transistor in positions X or Y in the diagram, but I have no idea what type of transistor to use or which pins I should connect where.

Ideally I'd also want to have a diode in series with the load to protect the supply against any voltage coming back the other way, how can I work out how much to increase the supply voltage by to compensate for this? (And can I just use the LED here after all?)

If it matters the load is a bunch of cells to be charged (4x 3.7v Li-on hooked up in parallel for charging, or series when in use)

+VCC is currently 4V but I can adjust this.

EDIT: I've just realised that actually I can just move the"switch" after all, despite previously stating that I couldn't Basically there are spare pins on the plug that I can use for this purpose. 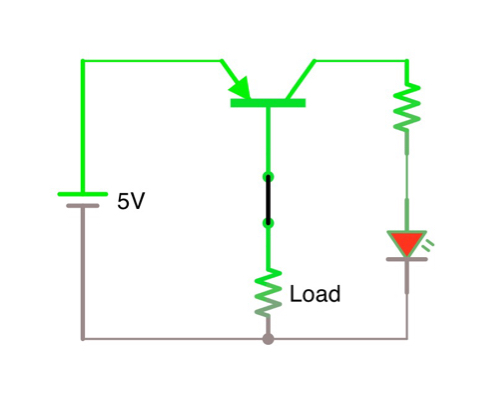 The PNP transistor makes it so the LED can't run if there is no load. 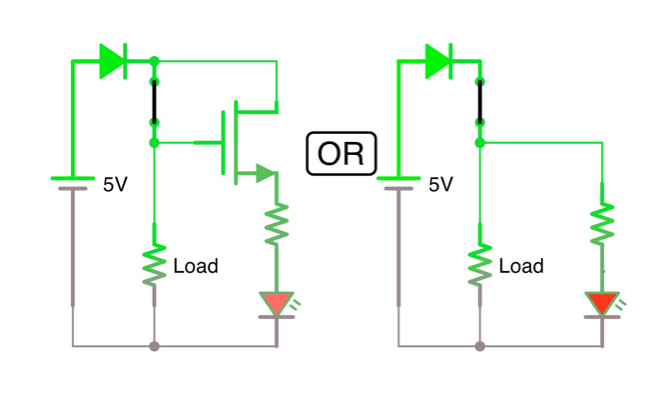 (Second circuit by @transistor because... Me stoopid)

Just connect the LED after the switch, not before it. That way it is powered from the same switched net that the load runs from. Of course you need a resistor in series with the LED to get the proper LED current at whatever power voltage you are using.

Here is what I'm talking about:

To size R1, you need to know what the power voltage is. Let's say that it's 12 V for example, the LED is a typical green T1-¾ type that can take 20 mA current. You decide to run the LED at 10 mA since this is only for indoor indicator use and you don't want to be pushing any limits.

Just to be sure, you should check the power dissipation. (9.9 V)(10 mA) = 100 mW. So a 0805 resistor will get hot but should still be within spec unless you're doing something unusual. If this is in a closed chassis that can get hot, then you may want a higher power resistor or use lower LED current. Modern LEDs can be plenty bright with just 5 mA thru them.

Not the answer you're looking for? Browse other questions tagged led transistors battery-charging or ask your own question.

319
Why is there so much fear surrounding LiPo batteries?
5
2N2222 Base Current Maximum Tolerance

5
How to hack a walkie-talkie to light up LEDs when it receives a signal
1
Charge indicator LED
11
How do LED light bulbs work?
0
Light dependent resistor (LDR) switched LED-circuit
1
Circuit for turn on a led when load connected
0
Blinking LED with transistor
5
Add a status LED to an existing device
1
Can someone explain how I turned on a circuit by touching it?
1
Does a boosting circuit reduce battery voltage without any load?