I am under quite some time pressure and I need to put together a document about how several DC/DC converters (preferably buck) with digital control compare to each other. I am pretty clueless, I have already pored over tons of datasheets, but I got little useful data, most of the converters out there have analog control. (Maybe I'm just so bad at finding anything on the web...) What I need is something like the UCD74106 from TI. It should have an external PWM input which can come from e.g. a microcontroller. The specs I am looking for are:

It would be nice to have datasheets with efficiency curves. Something like 'typical efficiency is blah-blah %' is not very helpful...

EDIT 2: I need the efficiency curves to see how the converter behaves at partial load. Also I am interested in finding the (approximative) load current at which the maximum efficiency is achieved (usually below rated current).

And yes, I need digital control! This has been explicitly stated in my assignment... The idea is to be able to reprogram the converters whenever necessary and to make them SMB/PMB capable.

I listed the datasheets to show, what I have found so far and to give an example of what I would like to have. Unfortunately 3 are not enough... I'd need a dozen or so.

Two things to think about.

First, even "analog" power supply control chips can be "digitally controlled", whatever that really means. A little external tweaking of the feedback and the output voltage can be varied. Many have shutdown inputs, but of course that can be accomplished other ways too.

Second, for fancy switching power supply control you can use a microcontroller directly, and obviously have all the digital control you care to program in. There are whole families of microcontrollers specifically intended for this sort of application. They have fast A/Ds, decent computer power, and fancy PWM modules that not only have high resolution but additional features like external shutdown modes, complementary outputs, etc. Check out the dsPIC 33F line from Microchip. All the high end switching power supply applications we've dealt with in recent years have had a microcontroller doing the closed loop control. Dedicated chips are more for simple power supplies, like running the microcontroller.

I do not know why your assignment requires explicit digital control but unless it was very very very very clearly necessarily an internal function of the IC I would assume that DC controlling signal would suffice. (An explanation of why or IF specific digital control at the IC level is needed would be useful.)

You quite possibly do not understand the use of "typical" in the context mentioned. Achievable efficiency in a given circuit will necessarily vary somewhat between members of a large quantity of IC's of a given type, due to production spread of IC parameters, & component tolerances. Overall real world efficiencies will be affected by inductor quality, variations in Vf of rectifier diode. (or sysnchronous rectifiers), capacitor value variation and quality, PCB layout, phase of the moon, proximity to a bank holiday and more.

Most SMPS data sheets have efficiency curves included which give a ~ midpoint value for assumed variatins i all the applicable parameters. They tend NOT to give expecte spread in efficincy for a given parameterset but you can get a feel for it yourself either by common sense reasoning or by calculation.

Data sheet graphs usually provide efficincies for mixes of 3 or more variables. For example in the UCD74106 datasheet that you cite, provides effiency against load current fo w values of Vin. Some data sheets will provide a family of graphs with one variable being varies per graph.

Even with the limited data in Fig2 (below) versus Vout you can deduce that efficiency is relatively sensitive to Vout as for Vout = 2.5V and 3.3V the two curves are almost coincident. Maybe 2% variation in efficiency as Vout varies by ~ +- 15% and Iout varying from 0.5A to <= 6A. 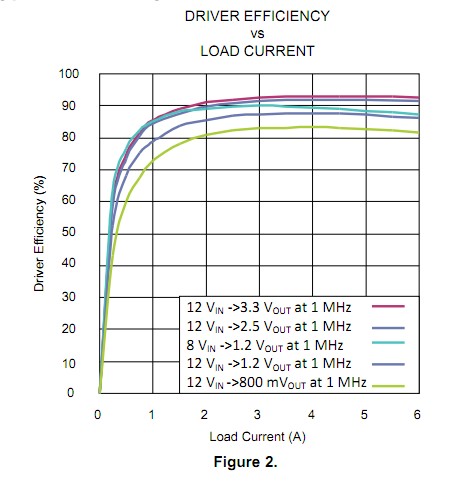 Not the answer you're looking for? Browse other questions tagged digital-logic dc-dc-converter specifications or ask your own question.