Two power supplies for an Arduino Mega - How to handle Vin pin? 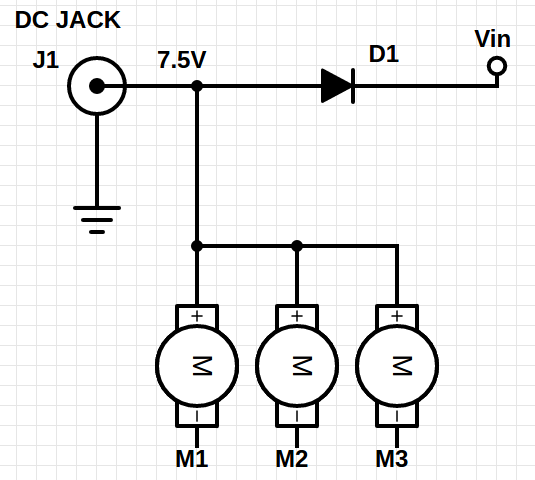 I'm using an Arduino Mega to drive 7 servos (only 3 shown in my schematic), and I'm having some problems with the power management. Worst case scenario, the servos will draw about 4 amps, so I got a 7.5V @ 4A power source that I can connect to an independent DC jack on my custom shield.

Now the problem is that since I command the servos through USB, the arduino has to be connected to the USB, which puts a voltage of 4.3V on the Vin pin.

The circuit you see above is what I originally thought. The diode was supposed to keep the servos from pulling current from the arduino when both of them are connected. However, an obvious problem now is that if both sources are connected (USB to the arduino, and my external power source to the DC jack), then you are asking for a ~2.8V drop across that diode.

While I could disconnect Vin entirely, I want the capability of just having the DC jack connected, and still power the arduino so I can control the servos with a pre-programmed routine. But it still has to work when the arduino is connected to the USB.

Putting an extra resistor in series with the diode seems like a very ugly an inefficient solution. Any ideas on how to make this work?

Thanks in advance for your answers!

arduino voltage power
share|improve this question
asked May 3 '16 at 0:31

Look at the Arduino Mega schematics, there is a circuit that selects either VIN or USB VBUS as the voltage source. It uses LM358 as a comparator, comparing VIN/2 to 3.3V.

So, basically, if VIN is greater than 6.6V, it disconnects USB VBUS from the supply circuit and it is then safe to use VIN.

So you can use the circuit you thought of (the diode isn't even strictly necessary, but is certainly safer), and it won't put 2.8V across the diode, because USB VBUS won't be connected to VIN, even when both the DC jack and the USB are connected. Everything will work as you expect.

Note that it works fine because 7.5V minus the diode drop is greater than 6.6V. Otherwise, you'd need to use a greater supply voltage. Also, if I were you, I'd use a schottky diode, not a silicon one.

Not the answer you're looking for? Browse other questions tagged arduino voltage power or ask your own question.

1
Using Multiple Power Supplies with RGB Leds and Arduino
6
How best to power more than one Arduino board as part of a single project
3
How to stop a switched current affecting an IC?
4
How to kill an Arduino when (dis)connecting 12V to Vin?
0
Sharing same battery with two dc motors and two servos
1
Arduino UNO: How to connect 2 way power for DC Motor?
0
Arduino is not getting power from adapter or Vin
3
Power selection circuit for USB or DC Jack - both at 5V
0
Problem using 5V LDO (AP7381) as power source for Arduino