Making an ID of a board type

I want to make hardware ID of a board without using microcontroller or any kind of pre programmed eeprom. All boards of same type will have the same ID. One ID per board type.

I was thinking of using i2c I/O expander and connect different combination of input pins to vcc via resistors to define ID of a board.

Is that good way of doing it? Will that be robust enough?

If you have a spare ADC input then a good way to do this is with a simple resistor divider. R1 on the Main board and R3 on the Daughter board form the divider. Different daughter boards will have a different value of R3 to present a voltage to the ADC which depends on the board fitted. 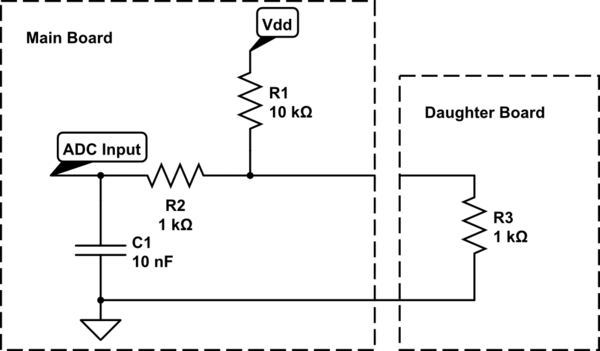 You say a micro in the base unit needs to identify the board type, and that these plugin boards already have a IIC bus going to them.

This is a no-brainer. Put some device the micro can detect on the IIC bus at a unused address. The easiest would probably be the cheapest and smallest IIC EEPROM you can find. In manufacturing you can write whatever information you want into the first few bytes of the EEPROM.

You say you don't want to use a EEPROM or a micro, but give no justification for such arbitrary and seemingly silly restrictions. We can only assume this is then for religious reasons, which have no place in engineering. Do your job right and use the best-fitting solution.

I just checked, and the Microchip 24AA00 16-byte IIC EEPROM is available in a SOT-23 package and costs 18 cents in singles, 14 cents in volume. All you would need is this chip and a bypass cap. You'd have to come up with a really good reason this isn't a good solution.

Update: the first version of this answer was wildly wrong, corrected below.

Update 2: added analysis of the required steps between the resistors, and made the method work with a single pin

The following might work, using just one GPIO pins and one pin on the connector. However, I have not tested this: 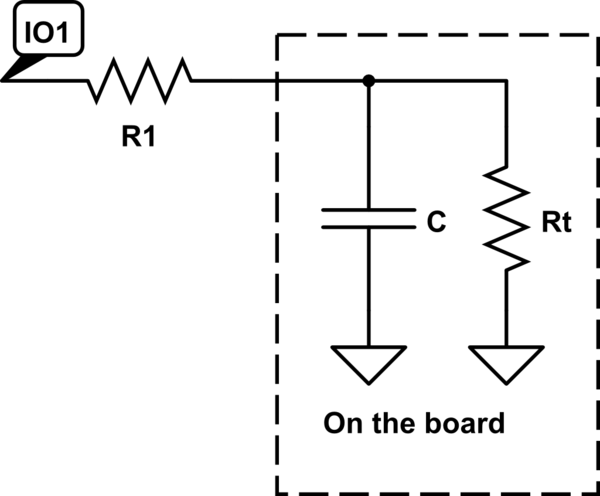 Here, R1 is simply to limit the current from the IO pin, and depending on the smallest Rt and the maximum capacitive load of the MCU pins you might be able to do without it. Anyway, \$R1 \ll Rt\$, so that the MCU can fully charge the cap.

Of course, you won't be able to identify many variants with this, as there's a limit to the smallest resistor you can use from the IO pin current limits, and due to tolerances in the capacitor, the IO pin threshold voltage, and so on, you will need to use rather widely spaced values of R for reliable identification.

In practice, for a given type of MCU, and since the voltage is always changing in the same direction when measuring, the variance in threshold is not likely to be quite that big. However, as the manufacturer typically does not provide that data, you'd have to test it, and you'd have to test it on quite a few devices to have enough confidence to use this in production. Even then, this might legitimately be considered a bit of a hack rather than a robust solution.

Further, as @TomCarpenter pointed out, while the voltage is between the thresholds there will be increased current consumption.

Not the answer you're looking for? Browse other questions tagged identification multiplexer .

0
Shift registers(?) failing after being left on a while
0
i2C multiplexer to use multiple sensor of the same type
0
Shift registers, flip-flop, Multiplexer & Demultiplexer with microcontrollers utility
1
6 Buttons, 2 Wires, 1 Microcontroller
1
Reading hundreds of inputs with a single atmega32
0
Multiplexer CD4051B gives strange readings
2
Difference between i2c switch and i2c mux
0
Pulldown to prevent floating input pins for multiplexer
1
circuit that disconnects a connection
0
Using a minimal number of muliplexers to create a 55:55 multiplexer from smaller multiplexers