All LEDs died yet rest of board fine; why?

I had a board with 3 LEDs, two driven by an AtXmega325e and one simply connected to the rails. The rails are 3.3V, the series resistors 70ohms. 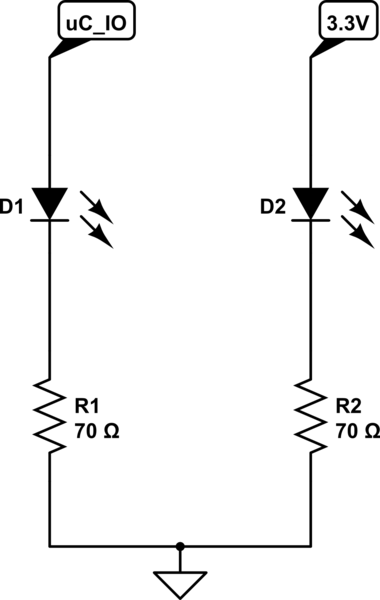 All LEDs stopped working at once, yet the rest of the board (OpAmps, ADC, UART) seemed completely functional. After replacing the LEDs, the new ones worked as intended again, so I must have damaged the LEDs themselves somehow. I am not sure whether they were oriented correctly, but they did not light up (as they normally do (albeit dimly) when measuring the diode drop) in either direction. The diode drop function of my multimeter measured the following (disconnected from the power supply):

The most confusing thing: After dismounting the LEDs they actually worked again. The two IO pins have been in all possible combinations (both on, etc.) but the LEDs never lit up. I lost the datasheet/name, but they are generic orange surface mount LEDs, with a max. current of 20mA (the names in the schematic are wrong). The solder joints looked completely fine, I also find it improbable that all three would be defective.

Do you have any idea what could cause this strange behaviour? How should I investigate this further?

The typical forward voltage of these LEDs is 2V so, a 70 ohm resistor is going to limit LED current to 1.3/70 = 18.6 mA (perfectly fine). If however, you managed to get 5V on the rails (by mistake) then the peak current could be 43 mA and exceed the continuous rating for the LED (30 mA).

Also, if you operated at a temperature above 50 degC then the maximum continuous current does fall - anything that might cause the LEDs to become overly hot?

You seem to have driven too much current into the LEDs. Make you use proper current limit resistor. Too high R will make LED dim and too little resistor will allow lots of current and kill LEDs. Follow specs of LED and make sure to provide proper current by using the properly calculated resistors.

Not the answer you're looking for? Browse other questions tagged microcontroller led debugging or ask your own question.

7
6x UV-leds in parallel turning on and off when they should be on all the time
2
Help wiring multiple different colored LED lights
1
Dimming an LED Strip (9v) with a 555 timer and MOSFET
1
Controlling multiple LEDs with Arduino and TLC5940NT
2
LEDs intermittently non-responsive to short multiplexed pulses after high reverse voltage?
1
Vertical ghosting on 64x32 1/16 RGB LED matrix panel
6
LEDs have a low glow “noise”
0
Parallel driving multiple pairs of LEDs in series from USB supply — is it a terrible idea?
0
Have my LEDs failed over time?