Ask Question
Asked 8 years, 9 months ago
Active 8 years, 9 months ago
Viewed 1k times
2
\$\begingroup\$
It's difficult to tell what is being asked here. This question is ambiguous, vague, incomplete, overly broad, or rhetorical and cannot be reasonably answered in its current form. For help clarifying this question so that it can be reopened, visit the help center.
Closed 8 years ago.

I've been messing around with the design of a geophone. This is a sensor that is coupled to the ground (sits on the ground) and records vertical movement.

I will use a phototransistor to detect movement of a suspended weight. The weight could be a permanent magnet so a coil could act on it. I'd like to build a circuit that would energize a coil + or - to oppose any movement of the weight. So I don't have to be concerned about an occilation period of the suspended weight. I just need to record the current fed to the coil. I have an lm324 quad op amp I'm planning to use. Thanks Peter

Long ago, Wireless world published a flux gate force balance circuit using a loudspeaker as the position driver. Gargoyle probably knows - I don't have time just now to dig. I MAY have the magazine if someone finds the reference.

This amazingly simple but capable fluxgate magnetometer paper should be of interest. A cleaver sensor. I've seen similar suggested elsewhere - some superb results are claimed. Brown University. They say -

Example only magnetometer circuit from the above page.

These people who patented the circuit below think it's a force balance magnetometer based on a geophone: 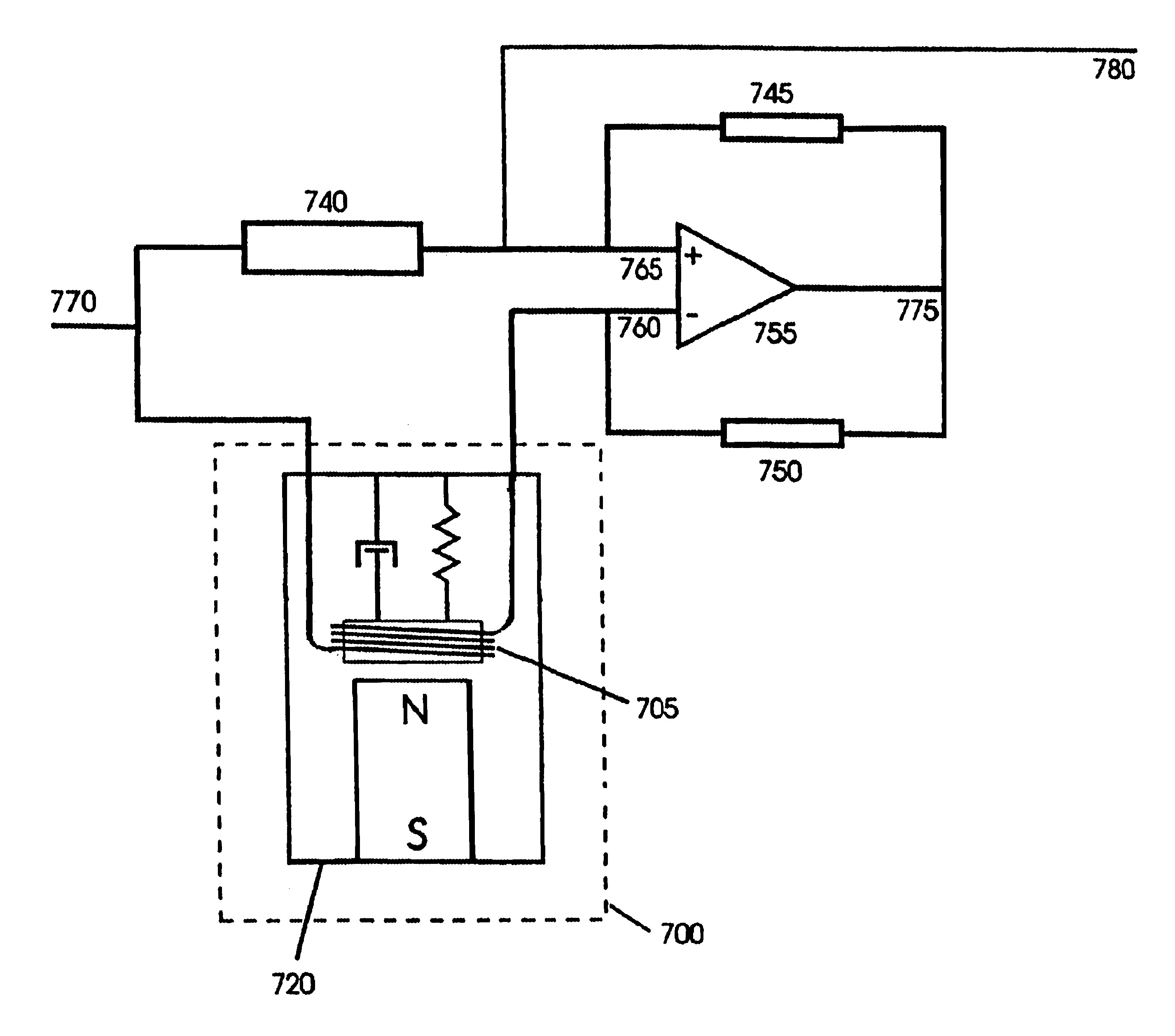 The "missing link" in the above which I could (easily :-( ) have made clearer is that a traditional geophone is a simple open loop device where a coil is moved near a magnet by a vibration source and induces a voltage which is analysed. Such instruments are affected by self resonance.

What Peter referred to and what the Wireless World article I mention addresses, was the use of feedback to null the position of the moving element against the perturbing forces and produce a feedback error signal as the output. Such a system is less affected by the mechanical characteristics of the sensor device.

The WW circuit implemented a fluxgate detector to provide feedback. My mention of the magnetometer is in that context but I agree, taken in isolation, it is not clear how it relates.

Finding the WW article would be nice. I'll try in due course. Anyone?

There is huge gap between having a LM324 and coil, and a working system.

First you will need something that can detect small movements and indicate deviation from the desired position. The signal from this sensor is what the servo system will try to null out. Then you will need a means of driving the coils from the relatively weak signal out of the LM324. But the most difficult part will be tuning this properly, especially if you want to do it all in analog as it seems you do.

Nobody is going to hand you a complete circuit. They can't even if they wanted to because we know little about your particular details. Try asking more specific questions.

Not the answer you're looking for? Browse other questions tagged operational-amplifier balancing or ask your own question.

3
Basic Frequency Control Circuit
0
Why op amp behave like that?
2
Basic understanding of op amp circuit
0
What is the maximum force that a FSR sensor can detect?
3
Basic Op Amp Circuit
1
Can this scheme be used to balance an unbalanced output transducer?
1
Can't balance differential amplifier circuit
2
Can I use a JFET like this?
3
Can anyone identify this component? Looks like an op-amp