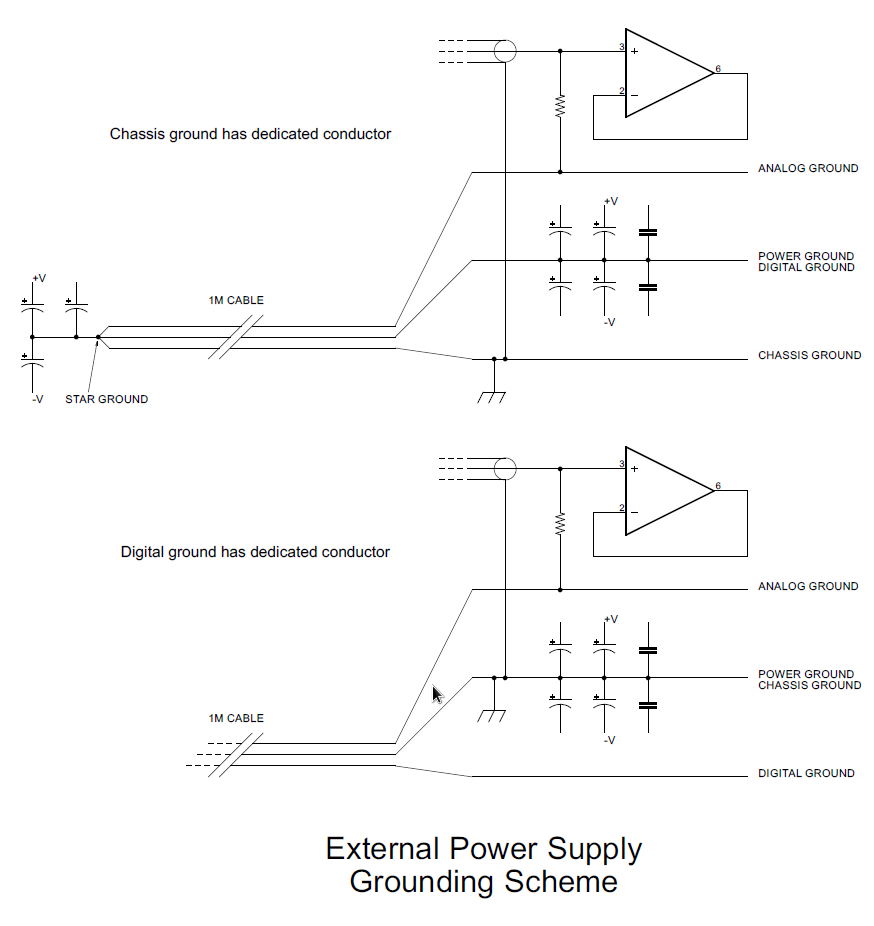 The scheme in the first illustration above has an issue. The digital noise can be significant enough to bleed into the analog circuit. Originally I theorized that with a large bypass capacitor connected close to the ground of the digital circuits, that any noise would be minimal and leave the analog circuit unaffected. Normally this works because the analog ground has it's own conductor. Unfortunately, this is not always true. Specifically, an LED driver (like CAT4016 or TLC5925) can generate very sharp currents. No amount or combination of local bypassing seems to have much of any effect on the voltage spikes generated by these chips. If I remove the LEDs and leave the digital communication there is no noise. But the load of the LEDs creates large 100mV spikes in the power ground wire. If the analog ground is connected locally to the power ground, this noise will bleed into the analog circuit (it is sometimes desirable to connect the output of an amplifier generating larger currents to the power ground instead of the analog groung for example).

In the second illustration above, the digital ground is given it's own dedicated conductor. In this case, the digital noise problem is completely resolved. LED drivers and digital noise are completely isolated. My test circuit has a SNR of more than 100dB and I suspect it's better than that but my analyzer is a cheap codec-in-a-box thing that runs on 5V so it's dynamic range is limited.

However, here is the problem:

To give the digital ground it's own dedicated conductor, I moved the chassis ground to the power ground conductor. So electrical discharge into the enclosure it will cause a significant spike in the power ground. Also, the power ground is potentially a source of noise that might be coupled into the analog circuit through shields and adjacent traces.

So the question is, is sharing the power ground with chassis ground a good idea? The enclosure would actually be grounded trough this conductor. It should only have power bypass capacitors and maybe some larger AC currents. But there shouldn't be any DC.

So what do you think? Is it ok to use the power ground as chassis ground?

Somewhere in all that circuitry you must have an ADC converter. That is the point where analog and digital signal grounds meet. Some ADC's even have separate gnd pins to handle this issue.

The digital gnd then has a trace to connect it to power gnd. This way all signal grounds are on the circuit board and power gnd follows its normal path from the board to the power supply (large can capacitors and/or voltage regulators).

Star grounds are still the best for multiple analog channels. That point has a trace going to digital ground. The key point here is to keep your analog and digital grounds on the board.

At some point they need to connect to power gnd and the large electrolytic bypass (can) capacitors on the board is the best place with the lowest noise. Your off-board power source and ground would connect here as well, avoiding ground loops.

At this point you could add a chassis gnd or use a 10k 1/2watt resistor if a direct connection inserts noise.

Not the answer you're looking for? Browse other questions tagged digital-logic analog ground grounding ground-loop or ask your own question.

6
How to avoid a ground loop between pcbs
7
How on earth shall I design the ground planes for mixed signal circuits, split or not?
5
For Multiple ADC circuits PCB layout grounding, why is "single point ground" important?
4
Grounding Scheme for Signal + Power
1
System Grounding and Mixed Supply Grounding
1
Grounding an Enclosure
10
The Pin 1 Problem in Audio, Star and Mesh Ground, and Contradictory Grouding Practices in Audio and Digital Systems
2
Metal enclosure grounding for audio project
1
IEC 61000-4-5 2 kV chassis ground to neutral and live surge DC