Hi i am new to using transistors for signal amplification.

Can someone explain to me how to figure out the amount of current being drawn into the base of the transistor when it is in the common emitter configuration. ( see link below for circuit diagram).

I would also like to know what else i would need to do to create a crude Class A audio amplifier. 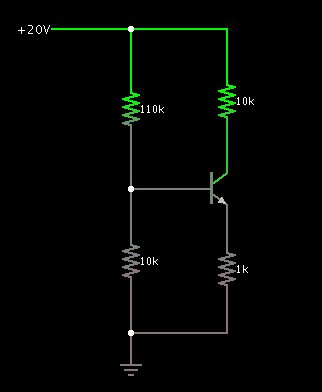 You have a crude Class A amplifier there now.
Input to base.
Output from collector.
Gain is about Rc/Re = 10k/1k = 10.

Brief answer re base input current appears at "cut to the chase" below, but ...

Don't even start to try and wonder about it or which resistor is which.
By the end it should make sense.

V base to emitter = Vbe

Vbe for an operating silicon transistor is about 0.6V
Can be somewhat different but use 0.6V for now.

We can call this 1 m or 1.1 mA close enough for this example. I'll use 1 mA for convenience.

Now "it happens" as a function of the formulae related to transistor action that the impedance of the emitter is 26/I for I in mA.
"Don't ask why for now" is good advice. The answer is - because as you will discover in due course, that's the way it is.

Call transistor current gain Beta, because that's what it is traditionally called for traditional reasons.

If you look into the base you effectively see Re multiplied by the current gain of the transistor. That's because for every mA that flows ij the emitter circuit you only need 1/Beta as much in the bases ciurcuit to control it so it APPEARS that the resistance is beta times as large.

Assume our example transistor has Beta = 100. This is well inside the range of normal for small signal transistors.

Note I said "to signal" as DC will or may have its own rules.
(All obey the same rules but other factors affect what is seen -
eg if we put a 10 uF capacitor across Re it is approximately 0 ohns to AC at audio signals so "vanishes". I said before that gain was ~= Rc/Re = 10
That was before we allowed for Rqe and before we bypassed Re to remove it for AC.
If we do the above gain becomes about Rc/Rqe = 10000 / 26.4 =~ 385

Cut to the chase:

Now, during the hand waving and mirrors we hid something. I said Vb worked iut at 1.66V. The current down the Rbu + Rbl string to ground will be i=V/r = 29/(110k+10k).
This current is just enough to set Vb = 1.666V as we calculated BUT with 1.666v on Vb the same current will flow via Rbl to ground. ie no base current will flow. Your original questiion was "how much base current" and that seems to say "none". However, with no base current the transistor will turn off, Ic will drop, Vre will drop and so Ve will drop causing more than 06V to appear on Vne so the ransistor will turn on and restore. Vb will fall just enough to draw the extra current needed fro Rbu and to reduce the current in Rbl. It will do this automatically and it will draw "just the right amount".

So we see that is more and less to what happens than appared. The correct example is dynamic and needs load lines on a graph. But "bood enoug" result goes. Based on above.

After going through the above that should not be as scary as it would hev been previously.

E&OE - could easily have typo'd something there.
Please point out if errors seen.

You haven't supplied details about the transistor, but then again good circuits work with real transistors with some minimum finite gain up to infinite gain. Let's use a very simple model for the transistor to analyze this circuit: The gain is infinite and the B-E drop is 600mV.

I'm going to call the left two resistors R1 and R2 top to bottom, and the right two R3 and R4 top to bottom. Do this yourself next time. It's annoying to talk about schematics without component designators. And don't complain your software can't do it because you chose it. Plenty of software can.

Now think carefully. What is the base current in this analisys?

Since we decided to simplify the analisys by saying the transistor gain was infinite, the base current therefore must be 0. Of course no transistor has infinite gain, but it's actually a good idea to make sure a transistor circuit works from some minimum gain up to infinite. This is because the actual gain of a transistor is not well specified, only the minimum. In practise, the actual gain of any part can easily be several times the minimum guaranteed, and a order of magnitude more would not be unheard of. There is great variation in transistor gain from part to part, so good transistor circuits work over a wide range.

You could go back and do the analisys more carefully using a finite gain like 50. That's a reasonable minimum gain a small signal and relatively low voltage transistor like this can be expected to have.

Instead of doing the full calculation at a finite gain, you can take a rough swag at it using the inifinite gain operating point as a start. There will still be about 1mA thru the transistor, so therefore 1mA/50 = 20µA into the base. The Thevenin equivalent impedance driving the base is 110kΩ//10kΩ. That's going to be just a little below 10kΩ so we'll just go with that (remember, we're just trying to get a first approximation not a exact answer since the exact answer depends on the gain which varies widely anyway). 20µA x 10kΩ = 200mV. So the base voltage will be around 200mV lower with a real gain of 50 as apposed to the ideal case with infinite gain. That will change the emitter voltage by the same amount, and the collector voltage by 2V. That still leaves the operating point reasonably close to the middle of the range, so all is fine with a gain of 50 or more.

The actual base current is directly related to the gain, which can vary widely. However, this circuit is designed so that variation doesn't matter.

18
Basic questions about transistor amplification
0
Driving a transistor base with PWM
3
NPN BJT base->emitter resistance is effectively zero?
2
Output Characteristics : Common Base vs Common Emitter
2
NPN transistor wired correctly?
1
Common base configuration impedence
2
Regarding symbols used for current amplification factor
1
In a class C amplifier, how does RB biases the base of transistor?
0
Common base current gain ideal value