I dont have a lot of smarts on circuitry design, so this is more of a can i do it, and what should i look at using or is there is a current solution.

basically we have some wireless PIR's with our security system that run off 9v batteries.

The batteries go dead usually at night time around 3am, and im trying to see if i can power the PIR with a power adapter (wall wart or similar, hopefully wired to a central location up to 20 metres away. (some are closer, around 2-5 metres)

I was hoping basically to have the PIR wired to a cat5 cable, (just because we have lots) and then run that in the wall or in conduit to a cabinet where the adapters would be, or even have one PCB or device that powers all the PIR's... as in 1 x 240v unit that isolates and distributes the 9v to each PIR individually.

any ideas or can anyone steer me in the right direction.

Update i was talking to an electronics guy and he said that i have to be careful about the wire becoming a radio antenna, and affecting the transmission to the control unit with power fluctuations. he mentioned about checking if the PIR has power filtering built in, otherwise it could be another reason for using batteries in the PIR's... i.e. batteries are in there, so they dont add the filtering...

So i have to look into that with the manufacturer.

There are cable adapters that allow you to carry power over ethernet cables, called Passive PoE, which is not the same as PoE. This helps if your cables have RJ45's on the ends. You can google for "passive power over ethernet". One example: https://www.sparkfun.com/products/10759. 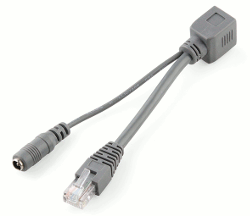 In terms of can I do it - probably. Check the voltage drop on the wires. V_at_box = Vsupply - 2 * Iload * Rwire. It's 2 x because the voltage will drop over both the positive and return wires. Make sure V_at_box is adequate.

Also check that the supply current provided by the wallwart is enough for the sum of the remote load currents under their worst-case load conditions and then add some margin. If there are 5 remote loads that range from [50-90] mA, then the total worst-case load is 450 mA. I'd oversize the adapter for 600 mA, or more likely 1 A. 1 A will be a common size and won't cost much more. So 1 A is good, cheap insurance that the wallwart will function over all conditions.

Also, if you use a wallwart, and the adapter body is external to the DC junction box where you break out the DC power to the cat5 cables, then you've kept 120/240 VAC out of the box from whence the DC power cables are run. It's worth doing.

You may want to use multiple wallwarts, perhaps one per circuit, if there is a reasonable chance that a failure will occur, either from damage to the DC power cable, or in the end device itself. Say for example that the cable was going outdoors and might take on water. You don't want one device/cable failure taking down the whole system. So if there's a reasonable chance, then you can mitigate that risk by using additional wallwarts to protect failures from taking the whole thing down.

Since you are prepared to run cabling in the walls a better solution would be to use the security system control panel to provide the power to your PIR's, along with battery back-up. Security systems work from 12V, so you will need a small module (you can buy from eBay) to drop the voltage down to 9V, but this should then be able to power all of your PIR's. Wireless PIR's take less than 1mA in quiescent state, and around 20 to 30mA when transmitting, so power should not be an issue.

Not the answer you're looking for? Browse other questions tagged pir or ask your own question.