Here is what I read on the nameplate of my phone charger:

I assume that the mains voltage is 100 volts. If the input is 5 watts, The input current is 50 mA only.

Why is it rated at 200 mA? I think the headroom of rated input current is too much.

I would rate it at 100 mA which means 50% of safety. Can transients reach more than that?

Thank you very much,

It could mean one or more of several things.

Correct. This states that the power supply will maintain 5 V up to a 1 A current draw. Note that it doesn't say what happens if you try to draw more than 1 A. Let's imaging the case where the power supply output voltage drops to 4 V if you draw 1.5 A. Power is now 4 x 1.5 = 6 W. This might reach a maximum at, say, 3 V and 3 A (9 W) because the power starts to decrease at some point due to the lower voltage.

It may be impossible to find out.

It has more to with how switching supplies are built. They rectify the mains and smooth it with a capacitor. Problem is, current can only flow when the input voltage is higher than the capacitor voltage (peak of the sine wave). So what happens is that the power supply draws energy from the mains in short bursts (while the capacitor feeds a steady trickle of power to the rest of the power supply), so it may very well be pulling 200mA, but only 25% of the time. For small supplies up to a hundred watts or so this is no big deal, but in larger units steps need to be taken to make sure the power supply draws a more continuous stream of power rather than in intense bursts (Power factor Correction). (side note, cheap electronics sometimes skip these steps, there was a no-name led light I tested at my old job that pulled all it's energy in a brief 200W burst despite only being rated to 5W, it hit 135'C on the outside amazingly it kept going). Most power supplies that cost more than a dollar perform better than that particular led.

Many testing agencies and/or international marketing laws for electric appliances require you to specify either the worst case, being inrush or hiccup, current, or fully specify the current drains, powers and power factors.

In quite a few cases, in fact, you are required to specify the limiting current (either as an extra line, or as the number if you have only one line), which can be a "by design cannot draw more than" current, or can be the current at which an internal fusing element will blow.

Add to that cautious component maths around the power factor of ringing core transformers at varying loads and input voltages and >=300% peak currents surprise me not at all.

Apart from that, under-estimating the peak current will mean you fail random tests, over-estimating peak currents of small appliances costs you nothing. As long as you stay under an input power of 50W (and likely even 100W) rated the rules will be the same almost all over the world for a certain device and design. Regardless of whether below 50W means 10W or 40W. So why not estimate a worst case scenario of 25W or 40W, if it means you always pass the requisite tests and have to change nothing about the design anyway?

Concluding with the personal experience that a well designed small ringing core can be made to function at upward of 90% efficiency with a no-load/null power of (much) less than 300mW, I wouldn't lose too much sleep over your power bill.

The input rating must take into account the huge inrush current that occurs when input filtration capacitors charge up when an SMPS (switched mode power supply) is turned on. This can cause current spikes an order of magnitude larger than the steady-state current.

For example, the input ratings must be taken into account for devices powered by a DC to AC inverter in order to determine if the inverter will be overloaded. As such, one can often find discussion of these matters by inverter manufacturers. For example, below is an except from Samlex's Inverters - General Information. See esp. the second paragraph ("The inrush current at turn on is several to tens of times larger that the steady state RMS current"), which is illustrated by the graph in Fig. 2 where it is 15 times larger. 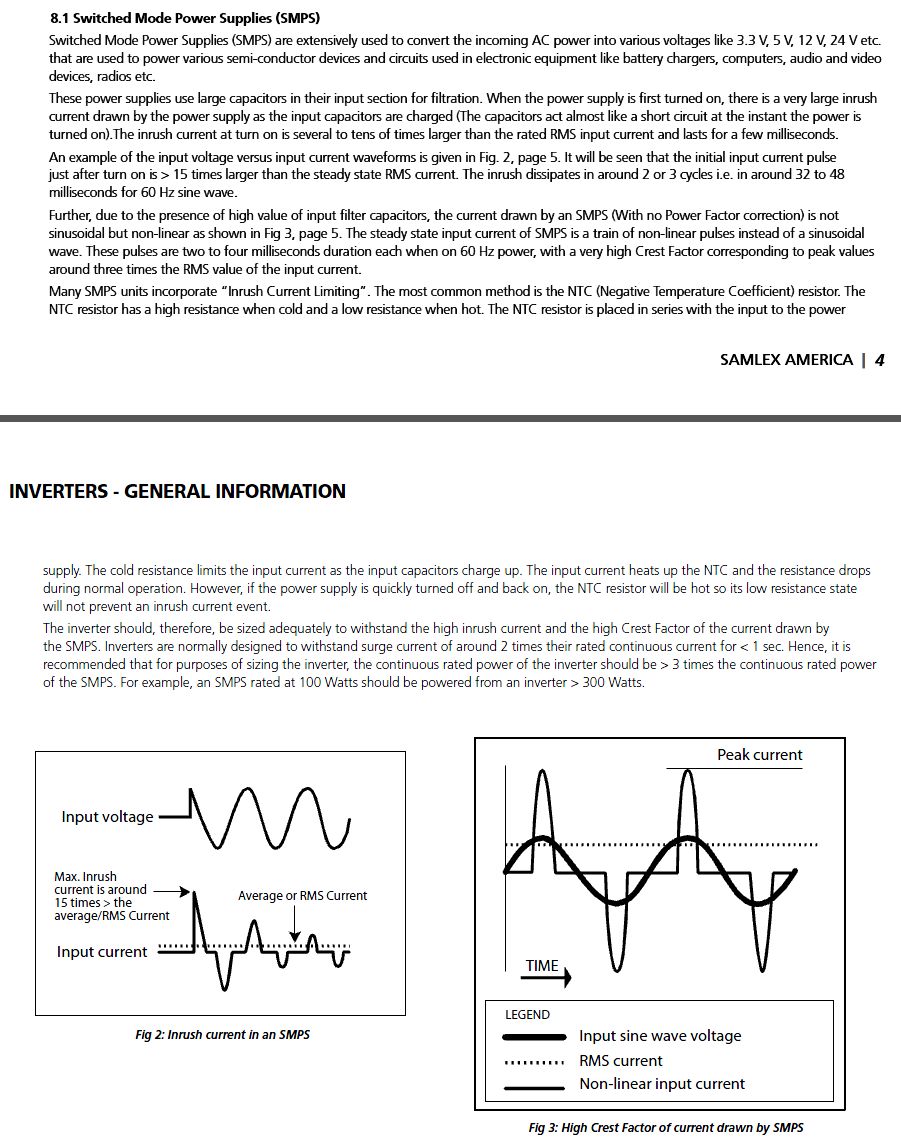 Not the answer you're looking for? Browse other questions tagged charger cellphone mobile or ask your own question.