Why does the ATTiny84 have both an analog comparator and an ADC?

I have been reading through the datasheet for the ATTiny84A, and noticed that it has both an analog comparator and the ability to use its ADC in unipolar or bipolar differential mode. From what I can tell, the main difference is that the comparator is faster, but it can only tell whether signals differ.

Since the comparator is always active and is effectively an analog circuit it can generate an output at any time regardless of the current CPU task. This can be used to generate an interrupt for a near instantaneous response to the input crossing the threshold.

The ADC, on the other hand, has a settling time, conversion time, is usually multiplexed, has to be polled periodically and requires code. All of these make it a much slower solution to the comparator.

The device can be configured to wake on comparator changing state. See page 128 of the datasheet. There is a power penalty as the reference voltage and comparator have to be powered on. I don't think there is a comparable wake-up for ADC.

Are there situations in which one would be more accurate than the other?

Yes. If the reference signal is analog the threshold doesn't have to be a discrete digital step value. (This may be masked by differences in the two inputs so it might not be that relevant.)

Will the either the comparator of ADC be more sensitive to small differences in input?

As above. It depends on the quality of the comparator.

One use case mentioned for the bipolar differential mode of the ADC was to determine the polarity of a signal. Wouldn't the comparator be better suited for this?

I had to do some reading on this. I think your interpretation of bipolar might be incorrect. The chip has a unipolar supply of 1.8 – 5.5 V so it would be unlikely to be able to accept negative voltages on the ADC or comparator. This is confirmed by section 20.1. 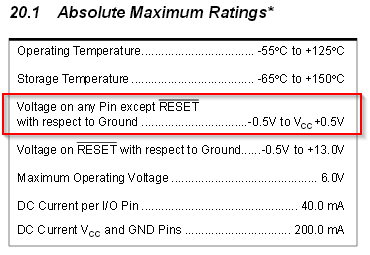 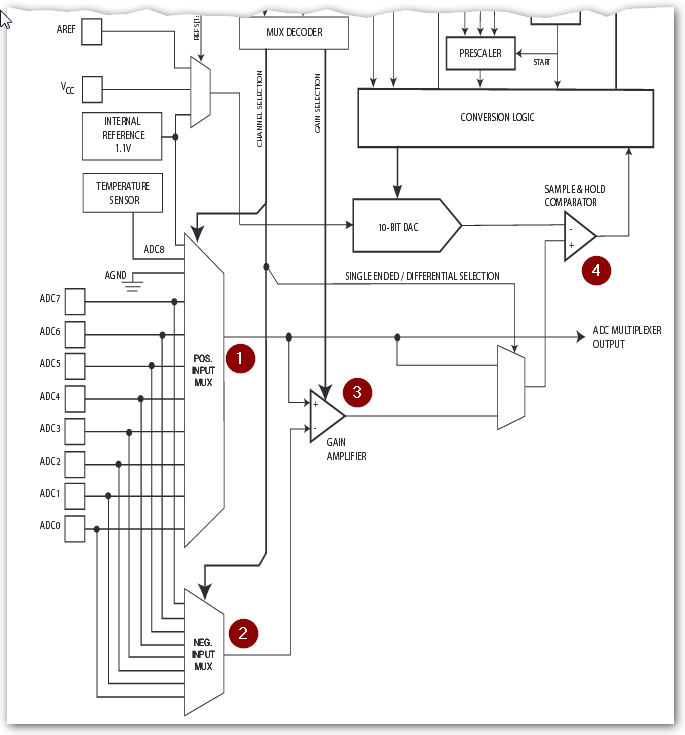 Comparatpr compares two voltage levels Va and Vb and outputs a digital signal Va>Vb. ADC converts an anaolg signal level to a digital number rapresenting a value. Comparator and ADC have nothing in common.

Not the answer you're looking for? Browse other questions tagged atmel comparator attiny or ask your own question.